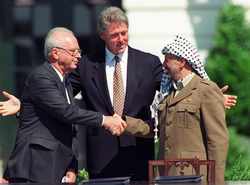 U.S. foreign policy — from the founding era to the present moment — revolves around a recurring debate about the diplomatic means for securing freedom. As the nation grew and the world changed, it was necessary to revise and refine the understanding of America’s role in international affairs and the character and extent of the nation’s alliances. With the rise — and rising awareness of — the worldwide China challenge, the question of how best to conceive of and manage the U.S. alliance system to secure freedom has taken on renewed urgency.

The nation’s founding generation generally thought that limiting alliances secured freedom. In his 1796 farewell address, President Washington exhorted the new nation, for the sake of “true liberty” and in defense of a “free Constitution” and “free people,” to “steer clear of permanent alliances with any portion of the foreign world.” In 1801, in his first inaugural address, President Jefferson echoed Washington’s warning on behalf of America’s free and democratic government: “peace, commerce, and honest friendship with all nations, entangling alliances with none.”

But a foreign policy well-suited to securing freedom during an era in which transoceanic communications and travelers — aboard the same wooden sailing ships — took weeks to arrive ill fits a world in which global communications occur instantly and jumbo jets fly across oceans in a matter of hours.

With the onset of the Cold War and the division of the globe into a U.S.-led free world and a communist system under the Soviet Union’s tutelage, the American foreign-policy establishment recognized that enduring friends and partners anchoring a far-flung international alliance system had become crucial to America’s ability to secure freedom at home. Vital as well, they believed, was a system of international organizations and agreements to provide the institutional infrastructure of an international order composed of free and sovereign nation-states.

The consensus that formed in response to the Soviet challenge did not resolve all controversies but, amid the China challenge, it continues to frame the salient questions. The most important of these questions concern how this diplomatic plan or military operation, that alliance, or these aspects of the international order secure freedom.

In “The Case for Microlateralism,” which recently appeared in Foreign Affairs, Jared Cohen and Richard Fontaine make the excellent point that the United States can enhance its alliance system by doing more to enable small states to lead diplomatic efforts. And they offer practical recommendations for ramping up such endeavors. To appreciate the full significance of their insight, however, it is necessary to separate it from the authors’ distortion of Trump administration foreign policy, misdescription of the realities of multilateralism, and failure to connect U.S. foreign policy to the nation’s paramount interest in securing freedom.

Cohen, CEO of Jigsaw (and my colleague on former Secretary of State Mike Pompeo’s Foreign Affairs Policy Board), and Fontaine, CEO of the Center for a New American Security, welcome what they present as President Biden’s restoration of reasonable diplomacy. “In sharp contrast with former U.S. President Donald Trump’s ‘America first’ agenda,” they write, “President Joe Biden and his administration have conspicuously embraced multilateralism.” To showcase “the importance of alliances and international cooperation” to the Biden administration, the authors stress that it “spent its first weeks in office reversing some of the more controversial manifestations of its predecessor’s approach — rejoining the Paris climate accord, halting the United States’ withdrawal from the World Health Organization (WHO), reengaging with the UN Human Rights Council, and conditionally recommitting to the Iran nuclear deal.” The authors say these actions are “generally to the good.”

Confusingly, however, they promptly undercut their praise of Biden and implicitly acknowledge the merits of his predecessor’s approach.

In agreement with the Trump administration, Cohen and Fontaine affirm that “not all multilateralism is created equal.” They also, consistent with the previous administration, observe that “[i]n an era of renewed great-power competition, venues such as the UN Security Council and the G-20 are frequently deadlocked, even when their members share broad interests.” And in a manner that coincides with Trump administration assessments, Cohen and Fontaine criticize two Biden administration multilateral initiatives they had only just praised: “Chinese influence has undermined the effectiveness of key international organizations, such as the WHO, and multilateral trade agreements, such as the Trans-Pacific Partnership, lack domestic political support.”

The other Biden administration multilateral initiatives the authors highlight, moreover, are equally flawed. Eight years of failed Obama administration efforts to reform the UNHRC from within support the Trump administration view that respect for human rights requires severing relations with an organization dominated by authoritarian powers and obsessed with condemning Israel. And proper evaluation of the Obama administration’s Iran deal turns not on the goodness of international cooperation but on the wisdom of providing the Islamic Republic of Iran with tens of billions of dollars; standing by as it foments terror in the region, destabilizes governments, and develops ballistic missiles: and leaving it on a glide path to nuclear weapons.

To address the shortcomings of the conventional multilateral options, Cohen and Fontaine advise the new administration to put to good use “the potential for small countries to take a multilateral lead.” They call this “microlateralism” and see it as complementing rather than replacing “global governance and broader multilateral efforts.”

As they show, “small-country leadership and large-state participation” are long-standing diplomatic realities. In the early 1990s, Norway orchestrated negotiations that contributed to the Oslo Accords. In the late 1990s, Togo pursued talks that hastened the end of Sierra Leone’s civil war. In 2008, Qatar took the lead in producing the Doha Agreement, which restored stability to Lebanon. In 2015, Jordan initiated the Aqaba Process, convening countries to counter terrorism. And in 2020, Austria brought together a diverse group of nations — including Greece, Denmark, the Czech Republic, Singapore, Israel, Norway, and New Zealand — to deal with the global COVID-19 pandemic.

Groupings led by small countries, argue Cohen and Fontaine, have several advantages over traditional multilateralism. Small countries can quickly launch new programs. They can bring a diversity of experience and expertise to bear. And they can operate more nimbly and impartially amid great-power competition.

Digital issues and the global pandemic, Cohen and Fontaine advise, are particularly ripe areas for fostering such diplomacy. The authors also urge the Biden administration to build on the Abraham Accords — a signature Trump administration achievement.

To enrich appreciation of the benefits that small-country diplomacy yields, Cohen and Fontaine helpfully invoke Tocqueville’s observations about “the art of association.” The Frenchman marveled at the propensity of 19th-century Americans to organize themselves into various sorts of groups in civil society — the wide space in a liberal democracy between the individual and the state. These civic or intermediate associations provide for a multiplicity of needs and advance many interests — from feeding the hungry to fostering commerce to enhancing social and cultural life — that are either beyond government’s purview or more effectively satisfied by citizens’ cooperating in their own communities to promote the public interest. Such associations are valuable not least, Tocqueville emphasized, because participation in them cultivates the virtues of freedom.

It is difficult for multilateralism as it is generally understood to apply the lessons of Tocqueville’s “art of association” to the international arena. For many diplomats and foreign policy thinkers — especially Europeans and American progressives — multilateralism does not denote, as its Latin root suggests, many-sided diplomacy. Rather, it has come to mean “maxilateralism,” or U.N. supremacy.

True multilateralism, however, leaves plenty of room for recognizing the opportunities within international civil society — the sphere between free and sovereign nation-states and international organizations. Indeed, thanks to its appreciation of the need for a diversity of associations within that sphere, the Trump administration was able to revitalize the Quad (the U.S., India, Japan and Australia), stand up the Clean Network, and broker the Abraham Accords.

With the China challenge unfolding in every region of the world, securing freedom depends not only on American citizens cooperating in countless ways at home in domestic civil society. It also requires the United States to operate effectively in international civil society by assisting partners in the formation of diverse groupings to accomplish the great variety of concrete tasks that sustain a free and open international order.

How Can Someone Achieve the American Dream?