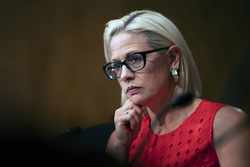 It was after 1 a.m. when Mark Kelly approached the lectern to address a small crowd of cheering supporters in Tucson on Election Night 2020. The former astronaut and retired Navy captain had just toppled Sen. Martha McSally to flip a seat vital to Democrats’ efforts to wrest Senate control from Republicans. And for the first time in 70 years, the Democratic Party held both of Arizona’s upper chamber seats.

In his remarks that night, Kelly invoked John McCain’s legacy and pledged to try to live up to his reputation as a maverick with a backbone of steel – a lawmaker who was willing to stand up to his party’s leadership when he thought it was wrong.

“Our state doesn’t need a Democrat senator or a Republican senator,” Kelly proclaimed. “We need an Arizona senator. A senator like John McCain.”

It was a familiar refrain. During his campaign, the challenger repeatedly cited the longtime lawmaker as his model, pledging to put partisan politics aside and work with political opponents to forge compromise. On McCain’s birthday in late August, Kelly tweeted a tribute, calling McCain “tough, principled, and willing to work with anyone to get things done for Arizona.”

So far, however, it has been the state’s other Democratic senator, Kyrsten Sinema, who has been willing to buck her party’s leadership regarding some of its top priorities, including this year’s push to change or eliminate the filibuster, the procedural rule essentially requiring most legislation to receive 60 votes to pass the Senate.

This one-time Green Party member known for wearing a pink tutu to antiwar rallies has transformed herself into a pragmatic Democrat. It has been a news-making metamorphosis – much more in the mold of John McCain than Kelly in his first months in office – and one not appreciated by the Democratic Party faithful.

Party activists panned her performance in March when she mimicked McCain’s dramatic thumbs-down tie-breaking vote against repealing the Affordable Care Act in 2017. Her vote, complete with a curtsy on the Senate floor, was a resounding “no” on raising the federal minimum wage. While most Democrats insisted the measure would improve the lives of low-wage workers, Sinema sided with critics worried that it would harm small businesses struggling to regain their footing amid the pandemic.

Her opposition to a key Democratic priority took some political observers by surprise and signaled that she – along with Joe Manchin of West Virginia – could be unpredictable votes for their party, which holds a razor-thin margin in the chamber as it tries to push through President Biden’s agenda. In order to pass a variety of liberal policies ranging from gun control bills and voting legislation to sweeping police reforms, Senate Democrats will need all their members to vote to modify or kill the filibuster.

At first, only the left wing wanted to nuke the filibuster. With such a limited ability to pass Biden’s agenda, however, Democratic leaders jumped on board as Biden reversed decades of opposition to eliminating it. Now only Manchin and Sinema are standing in the way.

“When you have a place that’s broken and not working, and many would say that’s the Senate today, I don’t think the solution is to erode the rules,” Sinema told the Wall Street Journal. “I think the solution is for senators to change their behavior and begin to work together, which is what the country wants us to do.”

While Sinema appears to be enjoying flexing her maverick muscles, Kelly has been hesitant, especially when it comes to the filibuster, which McCain always defended. Over the course of the campaign and in his first months in office, Kelly has refused to take a clear stand on the issue. It’s not hard to see why: He’s in a tough spot politically. His win over McSally in a purple-trending state was only in a special election to fill out McCain’s term, so he’ll be on the ballot once again in 2022.

His equivocation was on display when pressed on the filibuster by the Arizona Republic.

“Well, when we get to the point where we’re going to have, you know, a serious discussion about this, I’ll make a decision based on what’s in the best interest of Arizona and the country,” he told reporters for his state’s largest newspaper.

From last year to late March, Kelly has offered a string of similar evasions as several Democrats from bluer states openly campaigned to kill the 60-vote requirement for most bills.

McCain, however, never waffled in his view about modifying or abolishing the filibuster. Over the last decade, up until his death in 2018, he led the fight against changing or abolishing the procedure, arguing that to do so would permanently damage the Senate as an institution and the way the nation’s founders envisioned it as the more deliberative body.

As far back as 2005, McCain said he believed the Founding Fathers had designed the upper chamber with the “purpose of protecting the rights of the minority.” And in 2012, when then-Senate Majority Leader Harry Reid, a Nevada Democrat, threatened to alter the filibuster, McCain issued several dire warnings about such a step.

“What we’re talking about here is a fundamental change … in the way the United States Senate does business … which would make us no different than the House of Representatives, and of course would then erode dramatically the rights of the minority party and would reduce us, in many respects, to irrelevance,” he told reporters at a press conference that year.

When Reid followed through anyway, changing the filibuster rules to eliminate the three-fifths vote hurdle for executive branch nominations and federal judicial appointments, McCain warned Democrats that this could come back to haunt them, as it has.

In such a divided state as Arizona, where Trump supporters are still trying to prove election fraud, Kelly doesn’t want to get pinned down on the issue until  forced to do so. He has watched as Sinema gets whipsawed from both sides. Every state Republican legislator recently sent her a letter urging her to resist Democratic pressure to weaken or abolish the filibuster, citing polling that most Americans don’t support efforts to eliminate it.  A recent headline over an Arizona Republic opinion piece labeled her a “super villain” for opposing its elimination while claiming to be in favor of broader voting rights legislation, which probably cannot pass the Senate unless the rule is jettisoned.

For now, Kelly continues to try to straddle the issue – aiming to avoid alienating either his Senate Democratic leadership or moderate Arizona voters who could take a dim view of a move that would essentially green-light the most liberal parts of Biden’s agenda.  Although this hedge may be smart politics for a freshman senator, it reminds no one in Arizona of the famous maverick whom Kelly pledged to emulate.

Powering Down the Developing World