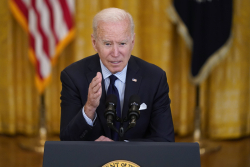 There will always be munis. Income from municipal bonds typically enjoys tax-free status at the federal level and in the issuing state. Conversely, when investors put wealth to work in a startup, private corporation, or public company, they face a capital gains tax penalty if their investment bears fruit. If a home run, that penalty becomes enormous.

Imagine that. Investors who subsidize the growth of government largely avoid taxation. But if they back an innovative corporation, or rush a distant future into the present through an intrepid investment with a visionary entrepreneur, a major IRS bill awaits.

Worse, the cost of prescient investing may soon increase. Seemingly in a bid to placate his ravenous left flank, President Biden has announced a proposal to nearly double the federal penalties on savings and investment to 43.8%.

The call to hike the capital gains tax makes total sense to the new left.  After all, why should money made from money pay less tax than money made from hard work? The reason is simple. We can only invest what we’ve earned through hard work, and not spent. Investment gains are a reward for abstinence and for courageously putting past savings at risk. A tax on gains amounts to an extra tax on wealth previously taxed.

Invested capital creates businesses and jobs, while government does not, except with money extracted from a private sector that could have created more opportunity with that same money. And not all investments are profitable. Does the government subsidize failure?  Not capitalism’s failures!  If you lose your life’s savings in a failed startup, that’s on you.

Let’s oversimplify. Assume a $1,000 investment. You will either lose your money or double your money.  With zero capital gains taxes, a coin toss gives you a 50/50 chance to win or lose $1,000. Anything better than 50/50 odds will make it marginally more interesting to invest. If a coin comes up heads 51% of the time, your 51% chance of winning is worth $510, and your 49% chance of losing cancels $490 of that, for a small expected profit of $20. That might be enough to entice a risk-tolerant investor to invest, rather than hold on to the $1,000, or spend it for instant gratification.  Except that gains are again taxed, both at the federal and state levels.

If you live in Florida, with neither income nor capital gains tax, last year you would have paid 23.8% of your capital gains to the IRS. A coin-toss gives you a 50% chance of winning $762 and a 50% chance of losing $1,000. You expect to lose $119 out of every $1,000 investment, on average. You need a lopsided coin that gives you heads four times for every three tails in order to eke out a skinny expected after-tax gain of $7 on a $1,000 investment, albeit with large risk because you either make $762 or lose $1,000.

Suppose the federal rate goes from 23.8% to Biden’s 43.4%, and suppose you live in California or New York City. Your combined capital gains tax rate will be around 57%. What kind of magical coin do you need to make an investment worthwhile? If your coin comes up heads seven times for every three losses, you’d expect to make $1 on a $1,000 investment, again with risk that dwarfs the average gain. No sensible investor will take that risk, unless they think the odds of success are even higher than that.

To be fair to skeptics, entrepreneurs and investors are, by nature, optimists. Otherwise, why would they ever invest? And invest they will, even in high-tax states like California and New York. Still, it’s much more daunting to bet you’ll win seven times for every three losses, than to bet on a 50/50 coin toss.

We must also consider this in terms of the unseen. While it’s hard to imagine Silicon Valley’s remarkable dynamism evaporating as a consequence of higher capital gains taxes, increased penalties on investment will discourage riskier initiatives. This is crucial when we consider the high rate of failure among startups. Most fail, and none are sure things. Accordingly, it’s a safe bet that a higher capital gains rate ensures many great ideas will never attract capital and will die.  There’s a reason none of the FANG stocks — Facebook, Amazon, Netflix, Google (Alphabet) — were launched in Europe or Japan.

Consider Elon Musk. He’s now worth about $200 billion.  If he decided to cash in his Tesla stock and move the money to a Mars venture, the feds would help themselves to $48 billion now, or $87 billion under Biden’s proposal, and a whopping $114 billion if he had remained in California. Imagine all the transformative ideas Musk could seed if politicians had shorter fingers.

Economic growth is lubricated by the relentless movement of wealth to its best use. Assuming Biden’s tax vision becomes law, the cost of wealth migration will soon soar. The easiest way to avoid capital gains taxes is to leave your money wherever it is, rather than redeploying it to the next great idea. The result is that Biden’s tax plan will not raise additional tax revenues, but will subsidize stasis.

All of this and more came to mind for us last week. A little more than 24 years ago, President Clinton signed into law a reduction in the capital gains tax from 28% to 20%. While the tax on capital gains should be zero to encourage innovation and risk-bearing, Clinton’s signature sent a positive signal that the “New Democrats” of his era well understood the importance of economic growth. How things have changed in the modern Democratic Party. Innovation will be the loser if Biden gets his way.

Indeed, for those eager to create a better future with courageous investments, the cost of doing so will soar. Progress has always been expensive, but at a levy of 43% to 57%? Oh, well — there will always be munis.

John Tamny is editor of RealClearMarkets, vice president at FreedomWorks, and author of the new book “When Politicians Panicked: The New Coronavirus, Expert Opinion, and a Tragic Lapse of Reason.”