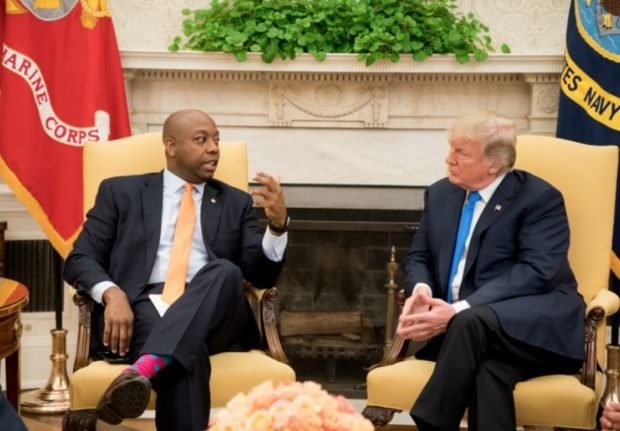 There was a time not long ago when the word ‘bigot’ would have been defined as follows: A person who determines one’s humanity and value based on the color of their skin, their gender, or other inherent traits, and behaves accordingly. That definition applies perfectly to today’s Democratic Party. One’s skill set, experience, and competence are irrelevant for Democrats, whereas our skin color, genitalia, and sexual preference are paramount.

Democrats are the very essence of bigotry, but they disguise their prejudice as wokeness and virtue-signaling. And while it must be enticing for Republican leaders to consider following the Democrats’ lead – thereby elevating women and non-white men to prominent positions simply because they are women and non-white men – they must resist the temptation. It’s bad for our country, it would be bad for the party, and most importantly: it’s wrong.

Public officials and government leaders should be chosen or elected based on their abilities, and nothing else. It seems ridiculous that it even needs to be said, but government officials who are responsible for trillions of tax dollars and the safety and security of our citizens should be the most well-qualified person. Period. When someone needs open-heart surgery, do they choose the best possible cardiologist, or do they insist, “I want a black guy to repair my heart valves?” When someone decides to take their life’s savings and put it in the hands of an expert, do they opt for the most honest and talented financial planner, or do they say, “That guy may be really good, but I want a woman to do the job?”

Last June, then-candidate Joe Biden unapologetically announced he would be selecting “a woman of color” to be his Vice-Presidential running mate; and he did. Considering that 76% of the U.S. population is white, and assuming that half of the remaining 24% are men, our sitting Vice-President, the estimable Kamala Harris, was selected from a pool of candidates which, by definition, excluded 88% of the population. Were there individuals within that disqualified 88% who were more qualified than Harris, but weren’t even considered because of their skin color or reproductive organs?

Biden’s strategy was bigotry, plain and simple. There’s no other word to apply when candidates are openly eliminated from consideration due to their race and sex. But Vice-President Harris is just one of many examples. As Biden’s transition team began to formulate their list of cabinet nominees after the election, they openly acknowledged their focus would not be on qualifications but on diversity. They promised that Biden’s team would be “more representative of the American people,” which is code for “less straight white guys.” Shouldn’t the goal have been to choose the most effective people? Former South Bend, IN Mayor Pete Buttigieg was selected by Biden to be Transportation Secretary, and administration talking points, along with Buttigieg’s sparce résumé, made it clear that his homosexuality was the primary, if not solitary qualifier.

Republicans, contrarily, whether in the voting booth or in positions of party power, tend to focus solely on merits, which does not exclude straight white men, naturally. Some of the fastest rising stars within the GOP are often members of that category, and 2021 is no exception. Ron DeSantis, Tom Cotton, and Dan Crenshaw quickly come to mind, along with more established stalwarts such as Mike Pence and Jim Jordan. But Republicans are increasingly witnessing women and minorities emerge as potential leaders of the party, and Rep. Tim Scott (R-SC), a black man, may be next.

The GOP has had strong women and minorities vie for leadership in the recent past. Dr. Ben Carson, Carly Fiorina, and the late Herman Cain all were considered presidential frontrunners at one point, though only temporarily. Former South Carolina Governor and United Nations Ambassador Nikki Haley, who is both a minority and female, is considered by many to be a likely, future presidential candidate, and perhaps even a favorite. If we include Sen. Marco Rubio (R-FL) and Sen. Ted Cruz (R-TX), who are both Hispanic even though Democrats try and pretend they are not, there are plenty of minority candidates to step to the front of the Republican party, and each one of them would arrive there due to their abilities, and nothing else. After recent attacks on Sen. Scott, however, and his fearless reactions to those attacks, he must be added to that list, and may indeed be at or near the top.

Tim Scott doesn’t have some of the qualities of his predecessors and contemporaries. He comes from a military family, and he holds a Bachelor of Science degree from Charleston Southern University. Dr. Carson, meanwhile graduated from Yale and the University of Michigan Medical School, and is one of the brightest and most respected doctors in the world. Tim Scott has been a successful businessman as owner of his own insurance agency, whereas Herman Cain reached the pinnacle of industry, becoming a successful chairman and CEO of a large corporation. Additionally, Rubio, Cruz, and Haley may all have more impressive credentials than Scott in certain aspects of their careers, but Tim Scott is still impressive; and his personality may be what ultimately separates him from the others.

Herman Cain was gregarious, witty, and charming. And while Scott may lack Cain’s outward charisma, being more reserved and calculating, the Senator is extremely likeable. He comes across as reasonable and logical, and extremely polished. Scott also has something that Cain, Carson and Fiorina never had: Washington experience. Scott has been in Congress for over ten years now, and has been highly productive, including his proposed-but-scuttled Justice Act addressing police reform from last year, and a consistently conservative voting record. But the characteristic that might be the difference-maker for Tim Scott is his courage.

The customary rebuttal by the opposition party following a presidential address to a joint session of Congress is normally assigned to an up-and-coming member of Congress, who preferably can add context to pressing issues of the day. Such was the case with Sen. Scott’s rebuttal last week to President Biden’s pathetic speech. As a black man, Scott can speak from experience regarding racism, where as Biden can only pretend. Democrats claim to desire reforms to American policing but do little to make such reforms effective or even a reality; Tim Scott actually drafted legislation which was filibustered by Democrats. Scott was an obvious choice to handle the rebuttal, but Scott also new the backlash he would receive. But he went ahead and did it anyway.

The racist attacks on Scott in the aftermath of his speech to the nation last Wednesday were predictable, but disturbing nonetheless. The hashtag #UncleTim was permitted to trend on Twitter for hours. CNN analyst Van Jones called Scott’s response “nonsense.” MSNBC commentator Tiffany Cross called Scott a “token” and a “clown.” And The View host Joy Behar, a white woman with an IQ only a fraction of Scott’s, inexplicably lectured Scott on “the difference between a racist country and systemic racism.” The assaults were vicious, vile, and relentless, particularly from fellow blacks. Scott is a smart guy who knew what was in store, and for those of who are not black we can’t possibly understand the bravery it took for him to stand there and take it. That type of nerve is a leadership quality that can’t be taught, you either have it or you don’t; and Scott has it.

Democrats may have spurned the concept of meritocracy, but Republicans must persist. If they do, and if they continue to focus on individuals’ capabilities while simultaneously striving to attract and develop minority candidates based on conservative tenets, Republicans will indeed have such a person rise to the top of the party. We’ll have a woman, or a black man, or a Hispanic at the top of the party in the not-too-distant future. Will that individual be Sen. Tim Scott? Maybe, maybe not. But we do know that when that happens – when a minority or a woman is leading the Republican Party – unlike our friends in the Democratic Party, that leader will have earned their place. He or she will be deserving of their position, and more importantly they will be poised to be an effective leader.