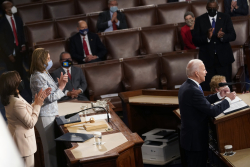 America learned Wednesday night, if it hadn’t before, not to underestimate Joe Biden. Yes, he narrowly won the states needed for victory in November. Yes, his party has the barest of congressional majorities. Yes, he presides over a country deeply divided on culture and politics. Yes, he all too often has been viewed as a political lifer fitted more for secondary roles than stardom.

Speaking to a socially distanced but clearly attentive Congress, President Joseph Robinette Biden Jr. made everyone forget all of that. He was formidable and commanding, deeply informed and ready for battle.

Biden went big – very big — in what amounted to a State of the Union speech, aggressively defending and pushing for a total of $4 trillion in new spending and audaciously arguing that the best answer to the violent anti-government mob that nearly destroyed the Capitol is a ton more government.

This president has long been in and around the center of the action in Washington, in the Senate from 1973 to 2009 and vice president from 2009 to 2017. With a lifetime of knowledge and wisdom at his disposal and summoning a calm but determined energy at the age of 78, Biden laid out a stunningly sweeping spending agenda. But he also charged ahead on pressing issues of social change in America, decrying “white supremacy,” “systemic racism,” violence against women and pushing for new protections for the LGBTQ community and for a renewed assault weapons ban.

There was much – very much – in the president’s address that most real Republicans, as well as the Trump Rump, will despise and denounce. That was going to be the case regardless, but Biden in essence dared the GOP to get on board (which they won’t) or get out of the way as he tries to steamroll them. Historians occupy hours of airtime musing aloud about which past president Biden is a reincarnation of – or a reaction to. The roster includes FDR and LBJ in Column A; Reagan and even Obama in Column B.

Joe Biden proved last night that he is only and consummately Joe Biden. His carefully written and even more carefully rehearsed performance was the pinnacle of life experiences and political and institutional circumstances that make him unique – and perhaps, when the history is written, more consequential than the analysts initially predicted.

Rather than be limited by his party’s narrow margins, and by a GOP infested with Trump devotees, Biden has decided to treat the situation as liberating. Not generally one to gamble as he climbed the ladder, he believes that now is the time to bet it all. He has the sense of urgency that only a still-vigorous 78-year-old can have when he gets the job he literally has been yearning for since childhood.

The COVID pandemic, as it turned out, gave greater focus and thematic consistency to the big-government revival Biden decided to pursue. It is unarguable that defeating a global pandemic is a task that only government can handle. And if it can do that – and in America it can and is doing so – then what else can government do that only it can?

Chinese leader Xi Jinping is doing his part as well. As even Donald Trump understood, however dimly, China’s rise is a story that will dominate 21st century geopolitics and economics. Biden is now shrewdly seizing on a new form of superpower competition to argue for a big-government response. Xi’s newly aggressive posture plays into Biden’s hands.

The collapse of politics as we knew it is driving Biden, too. With the rise of siloed social media, independent fundraising, and “branding” of individual politicians as their own movements, Congress and the old “big tent” political parties have ceased to be the engines of bipartisan compromise they once were. A president is now less a president than a prime minister: intent almost exclusively on maintaining a majority by tending to the internal needs and pressures of his own “governing” coalition.

Biden isn’t being “pulled to the left.” He knows how to read the room. He is going there because that is where his party is, and the Democratic Party is all he has. And he was always more of a traditional liberal union Democrat than people realized. Tiny Delaware, which he represented for so many years, was a semi-Southern state that is legal home to corporations and credit card companies. Even so, Biden was never comfortable (or all that welcome) in the Bill Clinton-led, pro-business, DLC Democrat movement. His emotional center of gravity in the party was and is labor unions.

On a personal level, the Joe Biden we saw Wednesday night was one who had spent decades being underestimated – and acutely feeling that way. Despite all his years in the Senate, he was never really part of the top leadership, regarded as too mouthy and flighty for the hard-bitten inside game. As Barack Obama’s vice president, Biden was well-liked and enjoyed the buddy-buddy role he was only too glad to play for his wary boss. But the Obamas never invited the Bidens upstairs to the private quarters.

Now Biden has the run of the place.

Howard Fineman is an NBC News analyst, journalism lecturer, author, and was formerly chief political correspondent for Newsweek and editorial director of HuffPost.

Democratic Impeachment of Trump Puts His 74 Million Voters on Trial