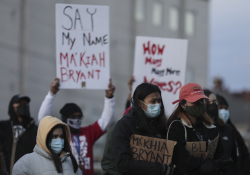 One of the more insane developments from the tragic shooting death of knife wielding Ma’Khia Bryant in Columbus, Ohio, has been the emergence of a desperate fantasy from the political left:

The “Let the kids have their knife fights” coalition that must think “West Side Story” is real life.

Valerie Jarrett, the former Obama administration adviser, offered her idiotic notion, echoed by many others.

“A Black teenage girl named Ma’Khia Byrant was killed because a police officer immediately decided to shoot her multiple times in order to break up a knife fight,” Jarrett tweeted. “Demand accountability. Fight for justice. #BlackLivesMatter.”

I liked Jarrett. She was once the most powerful woman in America, Barack Obama’s “consigliere,” and before that she advised Chicago Mayor Richard M. Daley. When Daley was going off the rails, plunging Chicago into its current fiscal death spiral, I met her for coffee and asked her to run for mayor to save the city.

I must have been living in a fantasy world. But all I wasted was a cup of coffee.

“Teenagers have been having fights involving knives for eons,” tweeted Bree Newsome, a prominent defund-the-police activist. “We do not need police to address these situations by showing up to the scene & using a weapon against one of the teenagers. Y’all need help. I mean that sincerely.”

I don’t need help, but you need help, and so do all others who showed up on MSNBC and other pro-left platforms to spew your idiotic ravings.

What happened in Columbus wasn’t a knife fight. Only Bryant had the knife, from what we see on police-released videos and according to at least one fact-checker. She is swinging at an unarmed person who is defenseless, leaning back on the hood of a car, a leg up to protect herself.

The officer, in that split second, had no choice. If he’d not taken swift immediate action, the headlines would have been: “White cop allows Black girl to be killed.”

Reason didn’t stop NBA star LeBron James from tweeting the officer’s photo with an ominous warning “YOU’RE NEXT” that James later deleted. James targeted the officer to all of his nearly 50 million followers. I wonder if that cop ever cheered James, an Ohio native, as he dunked like some basketball god. Does that matter, now?

Many of you have seen the Columbus police videos and one from a garage camera across the street. Bryant was lunging at another young woman, knife in hand, screaming before she was shot by the cop.

“The video doesn’t lie,” said Donovan Brinson, the neighbor with the garage camera.

According to the Columbus Dispatch, another neighbor down the street, Ira Graham III, also watched the police video.

“I believe in truth and facts. Video doesn’t lie,” Graham said. “She was in full attack mode. … [Bryant] was literally aiming a knife at this young lady. She needed to be stopped at that point. That young lady’s life was at stake.”

Another fact: The Bryant police shooting happened just shortly after Nyaira Givens, 13, was killed in a fight with another 13-year-old girl armed with a pocketknife in Winton Hills, Ohio. The attacker cut Nyaira in the neck and she died.

“I won’t be able to see my baby,” said the mother, Ashley Givens, who said her daughter had been the victim of bullying from the girl with the knife. “I can’t see that smile.”

The other girl, also 13, has been charged with two counts of murder and one count of felonious assault, according to reports.

That’s not fantasy. That’s one life ended and another destroyed with no racial politics to be exploited among them.

“West Side Story,” the musical based on “Romeo and Juliet,” is fantasy. With an amazing score by Leonard Bernstein, and choreography by Jerome Robbins, it is perhaps America’s greatest musical. And there’s that knife fight between the “Sharks” and the “Jets” that is a ballet.

But it isn’t reality. In reality, a knife fight is not ballet. You fight with knives, you get stabbed and you might bleed to death. And the death isn’t clean. Broadway just can’t capture it.

“8th Dan Kyokushin karate” might not mean anything to politicians and keyboard warriors, but all true martial arts experts know what that means.

On knives, he’d tell his civilian students: You are going to get stabbed. Run if you can. If you fight, know you will get cut.

Something else was bleeding when that cop in Columbus shot Byrant, quite likely saving a life, and the Chauvin jury in Minnesota was finding that former police officer guilty in the death of George Floyd.

What was bleeding was the central narrative of the left, pushed in angry, often violent protests in big cities, that cops are trained to be militant, that they target minorities, that they should be unarmed and defunded.

And in their panic, the left built another fantasy: that cops should allow kids to settle arguments with knives.

Will the Media Revisit Cuomo Smearing His First Accuser With Leaked ‘Personnel File’?

CensorTrack with TR: ‘Trust the ‘Science’…Unless You Call a Man, a Man