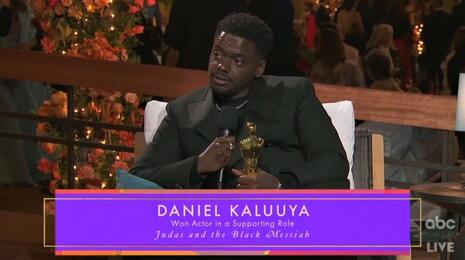 In the latest NewsBusters Podcast, we discuss the politics of the Oscars. Some liberals on Twitter were upset that white Anthony Hopkins won the Best Actor over the late Chadwick Boseman. But black actor Daniel Kaluuya won Best Supporting Actor for Judas and the Black Messiah.

In his acceptance speech, Kaluuya gushed over the Panthers: “They showed me how to love myself.” As even the movie shows, the Panthers were Marxist radicals who wanted policemen dead. It’s weird for the huge media conglomerates of Hollywood to distribute movies glorifying anti-capitalist revolutionaries.

From all that love to the Black Panthers, we explore the search for dirt in black Republican Senator Tim Scott’s family, based on the idea that he’s exaggerating the hard times of his family. Washington Post “Fact Checker” Glenn Kessler tagged Scott for telling a “tidy story packaged for political consumption,” which is not the way he’s handled wild claims by Elizabeth Warren or Hillary Clinton or Barack Obama.

Enjoy the podcast below, or wherever you listen to your podcasts.