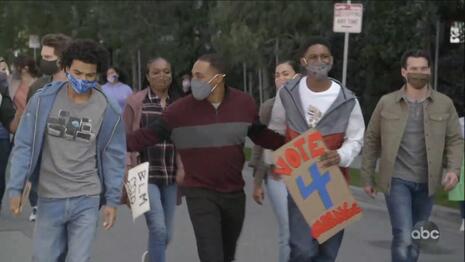 While the George Floyd murder trial ended in a guilty verdict for Officer Derek Chauvin this week, the firefighters of ABC’s Station 19 just found out about Floyd’s death in the April 22 episode, “Get Up, Stand Up.” A grief counselor was brought to the fire station to give professional counseling and preach critical race theory to the firefighters.

Dr. Diane Lewis (Tracie Thoms), a former firefighter, now a therapist, was called in by Captain Maya Bishop (Danielle Savre). Maya, a white woman, thought it was something she could do to help her crew cope with their shock and anger over Floyd’s death (the episode takes place in late May/early June 2020).

The entire episode consisted of scenes with Diane and various firefighters as they warmed up to the idea of speaking with a therapist. Dr. Ben Warren (Jason George) was the first to do so and he spoke about talking to his two teenage sons about how to behave around police – “The Talk” – and how he didn’t follow his own advice when he yelled at a police officer during a traffic stop. Ben told Diane that he tried to forget about the dangers of being a black man in America but then he hears a comment or sees the news and is reminded that being black in America is a life threatening condition.

Ben: Look… I’m exhausted, you know? I’m exhausted by navigating a — a W– a world that sees me and — and my kids as a threat. I mean, it’s — it’s this — it’s this constant nagging worry that — that never goes away. And I-if I do manage to forget and just — you know, just exist…a comment or a look or the news that a man has been killed in the street reminds me that I have to be careful. And — And it steals all of my mental and emotional energy that I should be giving to my wife and my kids and my health.

Diane: Is something going on with your health?

Ben: Being Black in America is a life-threatening condition. Other than that…

The rest of the episode carried on in the same way. There is even a scene where the Seattle Police Chief takes a knee in support of Black Lives Matter during a press conference, though his department is being sued by Dean Miller (Okieriote Onaodowan) a firefighter from Station 19 after a wrongful arrest.

Victoria Hughes (Barrett Doss) spoke about white guilt. She said white friends were suddenly calling her out of the blue and asking how she was doing. Diane agreed with her that it was white guilt.

Travis Montgomery (Jay Hayden) has an Asian mother so he brought up hate crimes against Asian Americans since the coronavirus pandemic. He said that the very day George Floyd died, his mother was spit on in a grocery store by a white woman who called the virus the Kung flu and refused to wear a face mask.

Jack Gibson (Grey Damon) is a white firefighter but was told by Diane that he is privileged because of his skin color, even though he was raised in foster care and lived on the streets at one point. When he said he wasn’t a racist, she told him that “we live in a culture built on white supremacy, so the racism is baked in.” Then she went off on an Ava DuVernay-style rant about the 13th Amendment and how slavery is still legal.

Diane: Do you know what the 13th Amendment did?

Diane: Except as a punishment for a crime.

Diane: That’s still the law. It is still legal to enslave Americans as a punishment for a crime. And do you know the statistics of incarcerated Black folks in America? 34%. We are 34% of the prison population, but we only make up 13% of this country’s population. That seem right to you? And you’re thinking, “Well, that’s because more Black people are poor, so they have to resort to crime. So they get arrested more. Sucks for them, but, hey, you do the crime, you do the time.” But how many crimes did you commit, Jack, when you were out there on the streets? Did you, uh, steal to eat? Did you run from police? Did you get drunk sometimes and make a mess with your friends?

Jack: Yeah, all of that.

Diane: But you never went to prison. Never went to jail. Never had a gun pointed at you. Never have a knee put on your neck. When you make mistakes, you get to learn from them. When people who look like me make any kind of mistake, we go to prison… Or worse. And way too often, no mistake is needed. We can laugh too loud and they’ll arrest us. We can put our hands in the air, and they’ll shoot us. It’s not in the past. It’s now. It’s still.

Andy Herrera (Jaina Lee Ortiz), the daughter of the former fire captain, spoke about growing up with cops and how disappointed she is that none of them are now speaking out against police brutality. She said she could pass as white as a girl because her skin color is light and now feels guilty. She characterized police brutality as “rampant”.

The last to talk with Diane was Robert Sullivan (Boris Kodjoe). He told her, “I’m scared because I’m eight minutes away from being another George Floyd.” All of the firefighters were personalizing the death of a black man who died while resisting arrest in a state halfway across the country.

The end of the episode showed Maya giving permission to the firefighters to join in a protest march. The vanity card during the closing credits read: “In Honor of George Floyd, the writer of this episode donated her script fee to the Color of Change Education Fund. The experiences and perspectives of the following people informed and enriched this episode.” Color of Change is a Soros-funded racial justice group that has been partnering with shows to push the Black Lives Matter agenda on TV. 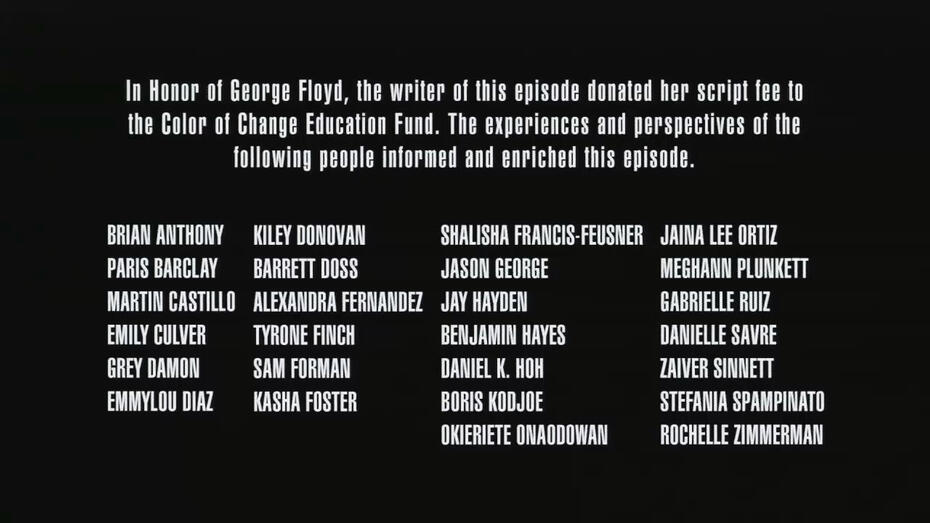 The message is clear – cops are bad and white people are racist whether they know it or not. Viewers of this show got an hour’s worth of conflating all the troubles of mankind with police brutality and systemic racism.

Sponsors of this show include Dove, Old Navy, and Disney. You can fight back by letting these advertisers know what you think of them sponsoring such content.