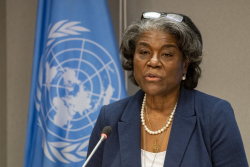 For a long time, war-torn Syria had four points of entry for life-saving food and medicine for its desperate citizens. Today there is only one – at Bab al-Hawa in northwest Syria along the border with Turkey – and now it’s in danger of being closed by the Assad regime.

That would be a disaster on top of a disaster. If Bab al-Hawa were closed, only supporters of the dictator Bashar al-Assad would get any aid and thousands more people will die. Right-thinking governments around the world cannot allow that to happen.

Syrians have already endured a decade of tragedy and crisis. More than 600,000 people have died, 13 million have been displaced and over 11 million need life-saving assistance. Eighty percent of Syrians live in poverty and 70 percent are food insecure.

A multibillion-dollar aid program keeps Syrians alive today, but it requires access points to get supplies to those who need it, many of them outside the territory under Assad’s control.  In February, United Nations Secretary-General Antonio Guterres told the Security Council that “even with the [one] massive cross-border operation underway, we are still far short of meeting people’s needs” and that “more access is needed.”

To keep just Bab al-Hawa open, the Security Council must reauthorize Resolution 2533, which currently allows Bab al-Hawa to remain open only until July 10. Any one of the five permanent members of the council (the United States, United Kingdom, France, China and Russia) can veto the reauthorization and thus close the entry point. Russia is threatening to do just that to keep its alliance with Assad intact.

U.S. Secretary of State Tony Blinken urged the Security Council to keep Bab al-Hawa open and also to reopen two other access points at Bab al-Salam and Al Yarubiyah. The U.S. ambassador to the United Nations, Linda Thomas-Greenfield (pictured), said it was “inhumane and unconscionable for the Security Council to halt the U.N.’s ability to deliver aid to all Syrians.”

Last year, President Trump’s ambassador to the United Nations, Kelly Craft, also pressed to keep multiple entry points open. But Russia, with China’s help, wanted to close them. Craft called Russia and China’s position “an affront to humanity.” Nevertheless, they forced the closing of one access point, leaving only one open today.

The Biden administration has taken positive steps to shore up American alliances around the world. It now needs to harness those relationships to help the suffering citizens of Syria. Specifically, it needs to pressure China and Russia to allow continued U.N. humanitarian access to Syria. It must also rally European nations and Arab states to fulfill donor pledges for Syria.

Russia is already engaged in a misinformation campaign accusing the United States of aiding “rebels” and “terrorists” and asserting that the U.N.-sanctioned humanitarian corridors are the source of violence in Syria. The opposite is true. The single corridor provides United Nations access for strictly humanitarian purposes. Russia’s gambit to cut the corridor is offensive to everyone who cares about human rights and the plight of innocent Syrians.

President Biden has acknowledged that Russian leader Vladimir Putin is a “killer.” He and his administration have put human rights back at the top of the American foreign policy agenda. Now the new president needs to show that he can make his rhetoric a reality and stop Putin from determining an even worse fate for innocent civilians in Syria.

Conditions there have been made much worse by the pandemic. The U.N. decision about keeping Bab al-Hawa open is a life-saving test of whether the United States can lead its partners to protect human rights and whether those rights really do now have a central place in U.S. foreign policy.

Saed Moujtahed is president of the Syrian Institute for Progress.

How to Fight Authoritarianism

The True Cost of Make-Believe Money