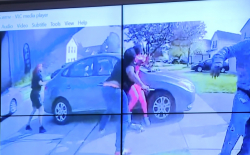 President Biden claimed that Derek Chauvin’s conviction on Tuesday “ripped the blinders off for the whole world to see the systemic racism” of police. With the police shooting that same day of 16-year-old girl in Columbus, Ohio, the White House again pushed the racism claim, noting that this was just another example of how “police violence disproportionately impacts Black and Latino people.”

But where is the evidence for these claims? In Chauvin’s trial, the prosecution never once mentioned evidence that the now-former officer is racist. A day after the verdict, the Biden administration announced plans for a pattern-or-practice investigation of the Minneapolis Police Department to determine if there is such racism, but the administration’s comments sure sound as if they have already determined the study’s outcome.

In the other case, body camera footage released by police revealed that Ma’Khia Bryant was fatally shot as she charged another girl with a knife. The officer shot one black girl in an attempt to save what appears to be another black girl from being stabbed.

Politicians such as Biden as well as the media have helped create a biased perception that is far from the reality of shootings by police. In a study, the Crime Prevention Research Center (where I serve as president) found that when a white officer kills a suspect, the media usually mention the officer’s race. When the officer is black, news coverage rarely mentions that detail.

And there’s evidence that blacks aren’t all that fed up with the police. A July 2017 Quinnipiac University poll in New York City found that blacks strongly support the cops in their neighborhoods — 62% approved compared to just 35% who disapproved. That approval rating was 11 percentage points higher than for the New York City Police Department as a whole. It makes sense that people only know their local cops, and rely on media reports to form impressions about other areas they are less familiar with. A 2020 Monmouth University poll found that 72% of both blacks and whites are satisfied with their local police.

There is other evidence. If blacks don’t trust the police, they presumably won’t turn to them as frequently as whites when a crime occurs. Yet, blacks report violent crime to police at a higher rate than either whites or Hispanics, even when controlling for income levels. Low- and middle-income blacks are about 11 percentage points more likely to report violent crimes to police.

Through extensive research, we found 2,699 police shootings across the nation from 2013-2015. That’s far more than the FBI found, since its data is limited to only 1,366 cases voluntarily provided by police departments. The FBI data has other shortcomings, too: It disproportionately includes cases from heavily minority areas, giving a misleading picture of the frequency at which blacks are shot.

Our database keeps track of characteristics of both the suspect and the officer involved in each shooting, local violent crime rates, demographics of the city and police department, and many other factors that help determine what causes police shootings.

Officers kill blacks at a higher rate than their share of the population: 25% of the suspects killed were black, 45% white, and 16% Hispanic. As for where the deaths are occurring, black suspects tend to die in heavily black larger cities with populations averaging over 600,000, while whites are killed in smaller cities with an average population of 250,000.

White suspects were slightly more likely to be holding a firearm than blacks (63% to 61%). Black and white suspects were both equally likely to be involved in violent crime when they lose their lives at an officer’s hands, though blacks who died were more likely to be involved in drug or property offenses. But police generally have more challenging jobs in cities where blacks are killed. The average city where blacks are killed had a 61% higher violent crime rate and 126% higher murder rate than where the average white was killed.

The data offered some clues for how to reduce these fatal incidents. It can’t explain all instances, such as George Floyd’s case where Floyd resisted arrest by four officers, or possibly the Columbus case where an attack by a knife-wielding suspect was already in process. But, usually, when more police are present at the scene of a confrontation with a suspect, the odds of a fatality decline. There is about a 14% to 18% reduction in the suspect’s chances of being killed for each additional officer present. Officers feel more vulnerable if they are alone at the scene, making them more likely to use deadly force. Also, suspects may be emboldened and resist arrest when fewer officers are present.

It is a dangerous fiction that prejudiced white officers are going out and disproportionately killing black men. But that doesn’t mean that measures can’t be taken to reduce shootings by police. The most obvious step would be to increase the number of officers responding to a call, to avoid forcing lone, vulnerable officers to make life-or-death decisions.

Lott is the president of the Crime Prevention Research Center and the author most recently of “Gun Control Myths.” Until last month, Lott was the senior adviser for research and statistics at the U.S. Department of Justice’s Office of Legal Policy.

Column: Heckling and Exploiting the State of the Union