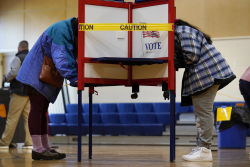 For years now we have all agreed that if our family or our neighborhood or our business operated like our government, meaning barely, such dysfunction would be addressed and resolved.

Indeed, Democrats, Republicans and independents are united behind this one nonpartisan truth: that Washington is broken. But we are all wrong, says politics innovator Katherine Gehl. Washington isn’t broken, it’s fixed. In other words, Congress will not work because it cannot work — by design.

Our parties aren’t the problem, social media isn’t the problem, gerrymandering isn’t the problem, even campaign financing isn’t the problem. Also, our government isn’t paralyzed by a lack of centrists or moderates in Congress. According to Gehl, founder of the Institute for Political Innovation, our system is dysfunctional because it doesn’t permit healthy competition. Having spent her career in business as the (now former) president and CEO of Gehl Foods, a $250-million high-tech food production company based in Wisconsin, Gehl knows competition is the vital ingredient to motivating peak performance. Without it there is no innovation, no accountability and ultimately no results. Incumbents keep getting reelected and we get gridlock.

Gehl notes that Congress’ performance — as reflected by its approval rating — is not connected to incumbents’ prospects of getting reelected, because that rating was 19% before the 2020 election yet incumbent retention rates were between 90% and 100% in 42 states.

Currently, candidates compete for victory in a party primary, and can win without support from a majority of the people they represent. With 86% of House seats already set in deep red or blue congressional districts, only the primary election matters. Whoever wins that first contest — long before November — will also win the general election. Since it’s all over before Election Day, general election voters simply don’t matter. It is only the engaged partisans, and single-issue activists, who choose the primary winner. It is only they who matter. Once that candidate arrives in Washington, the only people in their district they need to perform for to keep their job are those primary voters — most of whom do not want the officeholder to compromise and reach across the aisle, and will choose someone else if their member does.

Gehl’s construct is not a political reform but an innovation, one that is nonpartisan and can be implemented in years, not decades. It is designed so the victor is the candidate who appeals to the broadest coalition of voters, and then can only be reelected by — again — working in the interest of that broadest coalition of voters and no longer just a narrow slice of partisans. It is not designed to change the outcome; it changes incentives — for how candidates campaign and then how politicians govern.

In a wide open primary, more candidates, of all parties, can compete on a level playing field in an effort to win one of the top five spots. Currently, fear of the spoiler effect means independent and third party candidates cannot take on the duopoly and win, so most of them don’t try. Just look at how fast Democrats ran Howard Schultz off stage in 2019 when he announced his interest in running as an independent. Any Democrat or Republican seeking the defeat of President Trump was immediately opposed to Schultz’s his candidacy — even if they agreed with his platform and experience — because they knew his vote share would only help Trump by taking votes away from the eventual Democratic nominee. This happens in congressional races as well.

Gehl explains it all in a TED Talk, with a sample election that is easy to understand. In it, eight great Americans in history compete in the open primary with the top five heading to the general elections where voters rank their choices of preference from 1 through 5. At first, Aaron Burr comes out ahead with 30%, but then the last place finisher is dropped, and instant runoffs are held by adding in second-choice votes — and so on — until a candidate secures a majority. Ultimately, when Alexander Hamilton wins with 68%, he has done so by having appealed to the most voters overall.

The Constitution gives states the power to set the rules for elections, so we don’t have to rely on a gridlocked Congress to fix itself. (H.R. 1 and S. 1, the For the People Act, however, would end states’ election authority.) Last November, a modified version of this process, with four finishers instead of five, passed as a ballot initiative in Alaska. As a result, while Trump threatens to challenge incumbent Republicans in their primaries next year, Sen. Lisa Murkowski — one of his top targets — is not fretting his wrath. Should she run, in an open primary she will likely advance to the general election, having appealed to a larger number of voters than a GOP primary electorate. Gehl is pleased that some of Murkowski’s fellow U.S. senators have expressed interest in FFV but said she cannot yet reveal who they are or which states they represent. (Maine instituted a ranked-choice voting system in 2018.)

Final Five Voting has now been introduced in the Wisconsin state legislature by Dale Kooyenga, a Republican state senator, and Daniel Riemer, a Democratic state assemblyman, and Gehl said she is hopeful it may become law in the next year or two. In an op-ed in the Milwaukee Journal Sentinel, the two lawmakers argued that state legislators can no longer view the dysfunction in Washington at a distance. “We at the state level share responsibility for cleaning up the mess at the national level, because as elected state leaders, we have the power to do something about it,” they wrote.

Following the Alaska model, Gehl said, if only four other states also eliminated both party primaries and plurality voting, Congress could have 10 senators and numerous members in the House who could deny the partisan leadership of both chambers and parties the chokehold it now has on the legislative process. She expects FFV to break through in enough states within three election cycles.

In the House of Representatives, FFV has the support of two lawmakers known for their bipartisan outreach who contributed a foreword to the book Gehl co-authored with Harvard business professor Michael Porter, “The Politics Industry: How Political Innovation Can Break Partisan Gridlock and Save Our Democracy.” Rep. Mike Gallagher (R-Wis.) and Rep. Chrissy Houlahan (D-Pa.), both veterans who came to Congress in 2016 and 2018, respectively, wrote that they had entered office to serve their country as they had in the armed forces and were “dismayed” to find their status as members of different political parties was “seemingly more potent than our shared love for America.” The two conclude, “The system is built to tear us apart,” but that it doesn’t have to be, and that Gehl and Porter’s book proves the point. They urge their fellow Americans to “[p]lease engage — we owe it to our extraordinary country to do so.”

Gehl and Porter began their advocacy for political innovation with a critical stakeholder in the political industrial complex — the business community. The two have warned: “There is no greater threat to American economic competitiveness and social progress — no greater threat to the combination of free-market economies and liberal democracies that has delivered more human advancements than any other system — than our passive acceptance of a failed political system.”

Yet that tolerance of the status quo appears to be waning. While for many years corporate leaders have acknowledged the long-term risk a paralyzed government would pose to the free market economy, they have mostly waited out periods of Democratic control to enjoy tax cuts and regulatory relief when Republicans control Washington. Gehl said the need for change — and stability — has reached an inflection point.

“There is a potential silver lining in the level of crisis we have reached: that it has people coming to terms with the limits of the way they have engaged with the system up until now,” Gehl said. “What it does to the overall competitiveness of the economy, as well as to their employees’ and customers’ lives, and their own lives and families’ lives, will rise to be a bigger benefit than the loss of an ability to perhaps weigh in in a self-interested way in a completely dysfunctional system.”

Gehl has coined her goal as “free market politics,” a change that will inject dynamic competition to produce results, innovation and accountability into our system, which currently requires none. “America was founded on the greatest political innovation of modern times,” she said. “This is freeing up the system of that kind of advancement that America was known for.”

In this new free market, there are no losers. On the other side of this systemic change, no one loses a job. Political ads still get made, funds are raised, strategists and consultants shape campaigns. The candidates are just tailoring their messages to a larger group of voters, and since they aim to be those voters’ second or third or fourth choices if not first, they are no longer using nasty negative messaging against the other candidates.

That the notion of legislators actually legislating and serving the public interest seems radical is a measure of how badly our system has deteriorated, but we must acknowledge how dangerous the status quo is and reject it.

A.B. Stoddard is associate editor of RealClearPolitics and a columnist.

The Future of Libya | RealClearPolitics