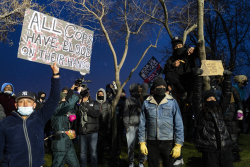 Chicago holds its breath, awaiting release of a police video showing 13-year-old Adam Toledo, reportedly with a gun, shot dead by a cop.

The city by the lake hasn’t recovered from the waves of looting and other violence that grew out of last year’s George Floyd protests. Just look at all the vacant storefronts on North Michigan Avenue, the “Magnificent Mile.” And now Chicago looks north to a trembling Minneapolis, a city on edge with the murder trial of Floyd’s alleged killer, former Minneapolis police officer Derek Chauvin, a white man. Floyd was Black.

Just a short drive from Minneapolis, in Brooklyn Center, there is chaos in the town government amid street violence in the aftermath of another police shooting that claimed the life of 20-year-old Daunte Wright, a Black man who appears to resist arrest during a traffic stop and ends up being shot by a white police officer.

“Minnesota is a place where we know that you can create space for grievances to be aired and First Amendment rights to be expressed,” Walz said this week. But “those that wish to do harm or destruction to property, or to put people at risk, it will not be tolerated.”

Yet beyond the political posturing and the constant threat of street violence, what do Americans see?

All of us see the unspeakable horror of two human beings, two Black men, killed by law enforcement officers. Their deaths cry out for justice. What happened to Floyd and Wright at the hands of police is beyond tragic and should never have happened.

But politics is downstream of culture.

Consider Brooklyn Center, where Kim Potter, the veteran police officer who apparently shot Wright with her gun while thinking she was firing a taser, has resigned. Tim Gannon, the police chief, has also resigned for suggesting Potter killed Wright by accident. And city manager Curt Boganey was bounced for saying Potter was entitled to due process.

Imagine that. Calling for due process is now a political sin.

I’m not suggesting that “accidental” means “blameless.” Anyone who handles a gun, particularly if they wear a badge, must be held to the highest conduct. The legal process should determine what happens to Potter.

“All employees working for the city of Brooklyn Center are entitled to due process with respect to discipline,” Boganey said before he was fired by Mayor Mike Elliott. “This employee will receive due process and that’s really all that I can say today.”

Due process in the criminal justice system is an explicit constitutional right protecting each and every one of us, the bedrock of our American justice system. And many of us, in the past, would have expected due process be granted a veteran police officer. Do we get to hear, to understand, what happened from Potter’s point of view?

Things get blurry with political cataracts in our eyes.

What is most telling is the reaction of a Brooklyn Center council member, Kris Lawrence-Anderson, on the firing of Boganey. “He was doing a great job. I respect him dearly. I didn’t want repercussions at a personal level.”

But rather than be accused of heresy, she offered up Boganey’s head, voting to fire him. She’s not the first, nor will she be the last, to calculate this way. Her reaction was fear. And she capitulated, worried that her property would be damaged and that she herself would become the target of protesters, or that she would become socially isolated.

She’s not alone, is she?

It is all so telling that I wouldn’t be surprised if Lawrence-Anderson’s reaction gets stuffed into some memory hole so we won’t have to deal with it.

“It wasn’t an accident,” tweeted Tlaib. “Policing in our country is inherently & intentionally racist. Daunte Wright was met with aggression & violence. I am done with those who condone government-funded murder. No more policing, incarceration and militarization. It can’t be reformed.”

“From slave patrols to traffic stops. We can’t reform this,” tweeted Pressley.

As Chicago prepares itself for the release of the Adam Toledo video, the city’s activists are primed. Many use those same talking points, offered without much challenge by local media. The activists don’t seem all that interested in the facts offered by prosecutors that Toledo was holding a gun at the moment police confronted him. The video, hopefully, will explain more.

Lightfoot, who has tried to appease the anti-police left by picking unnecessary fights with her police department, is hoping her cops protect the city.

“We’ve been preparing for quite some time,” Lightfoot said the other day, “but my hope is that people will embrace … peaceful expressions, whatever their sentiment is regarding the Toledo case or the outcome of the Chauvin trial.”

She wasn’t prepared for the violence and looting from the Floyd protests, though she had days to get ready.

In a damning report on city hall’s handling of the protests, the city’s inspector general characterized Chicago’s response as “confusion and lack of coordination,” risking the safety of police and citizens.

And now Chicago holds its breath, looks to Minnesota and waits.

Summary: President Joe Biden will deliver remarks at a service to honor fallen peace officers on Saturday after his party