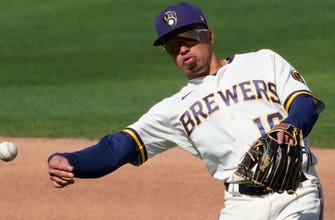 The Milwaukee Brewers will be without one of their key acquisitions for a while.

Second baseman Kolten Wong was played on the 10-day injured list Saturday due to a sore left oblique.

Wong reaggravated the injury during Thursday’s game against St. Louis and said he was unable to complete a swing when he faced Cardinals reliever Andrew Miller.

Wong, who had a tearful reunion with Cardinals fans prior to his first plate appearance, was removed from the game and replaced by Daniel Robertson.

A teary-eyed @KoltenWong got on base his first time up back in Busch Stadium.

Special moment on a special day for the @Brewers star. ?? pic.twitter.com/TNDbwMQvDC

After spending eight seasons in St. Louis, the two-time Gold Glove winner signed with Milwaukee this past offseason. He had just two hits in 19 at-bats, although walking five times (.346 on-base percentage), with no extr-abase hits and one steal in the Brewers’ first seven games.

To replace Wong on the roster, veteran Jace Peterson was recalled from the alternate site. The left-handed hitting utilityman appeared in 26 games for the Brewers in 2020, owning a .200/.393/.356 slash line while playing right field, left field, first base and second base. He manned second for just 15 innings last season but has played 286 games overall at second in his seven-year career, the most he’s appeared at any position.

Robertson and Peterson could fill in as a platoon at second in Wong’s absence, or Keston Hiura could slide back over from first base. Peterson is starting at second base in Saturday’s lineup at St. Louis with Hiura remaining at first.

Reliever Bobby Wahl was moved to the 60-day injured list to make room for Peterson on the 40-man roster.

Bucks, not Nets, are more likely to win the East I SPEAK FOR YOURSELF