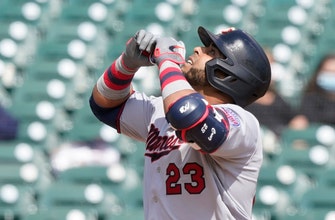 Nelson Cruz had to sit out most of the Minnesota Twins’ season-opening series in Milwaukee last week.

The Brewers, of course, play in the National League, so manager Rocco Baldelli couldn’t pencil him in at designated hitter. (Cruz hasn’t taken the field since playing 26 1/3 innings in right field for Seattle in 2018.)

Cruz pinch hit in all three games against the Brewers, going 1 for 2 with an RBI on a sacrifice fly.

Well, the Twins made the jump back into the American League on Monday, playing the first of three games against division rival Detroit. Cruz was in the starting lineup at DH, batting third between second baseman Jorge Polanco and outfielder Max Kepler.

And, boy, did he make an impact.

Cruz went 3 for 6 with one double, a solo homer, a grand slam and five RBI. It marked Cruz’s 37th multi-homer game, and his 10th career grand slam.

Of those 37 multi-home run games, 12 have occurred after he turned 38. That’s the most multi-homer games for any player aged 38+, besting San Francisco’s Barry Bonds (11) and Boston’s David Ortiz (10).

The grand slam, which he smacked off Jose Urena in the second inning, had an exit velocity of 114.6 miles per hour. It was the second grand slam hit by the Twins at Comerica Park in the last 10 years, and the first since Ehire Adrianza on June 12, 2018, according to Doug Kern. Cruz is also the first Minnesota batter with a pair of homers including a grand slam at Comerica Park since Danny Valencia on Sept. 25, 2010.

But, of course, Cruz wasn’t finished. He led off the fifth inning with a solo shot to left field, a home run measured at 418 feet with an exit velocity of 116.6 miles per hour.

Cruz now has the second-most career home runs at Comerica Park for any visiting player (19), second only to Ortiz (23).

Maybe next time the Twins play Detroit, the Tigers will smarten up and just give Cruz a free pass to first base.

Our favorite 40-year-old still has plenty of pop in that bat.

K-State narrowly misses out on upsetting No. 13 Texas in 80-77 loss

Antoine Walker: ‘Bucks will need to adjust if they want this Finals win’ ‘ FIRST THINGS FIRST