They call the show Reliable Sources, but CNN’s Brian Stelter brought on their old Chief White House Screamer Jim Acosta, who’s now going to host a weekend show called Newsroom. The topic was how Biden coverage would be different than Trump coverage, and Acosta just had to pretend that they are hard-hitting truth providers when Democrats are in power.

STELTER: Jim, this is your first weekend anchoring here on Saturday and Sunday afternoons. Do you feel like your rundown, your lineup is really different than it would have been in the Trump years?

ACOSTA: If you were asking asked if I was run down, I thought you were talking about how I felt during the Trump era. No, I think that, you know, listen, I think we’re all dealing with Post-Trump Stress Disorder, you know, other than that Happy Easter as he was saying in those statements a few days ago. 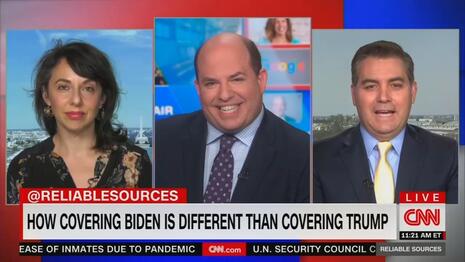 Stelter giggled along. He had wondered how the press should cover Biden’s “ambitious” infrastructure spending, and touted it might be smart to spend massively on infrastructure “for the future.” Weren’t they allegedly doing that in Obama’s first term? No one remembers that now. Acosta went on the usual partisan rant.

ACOSTA: There are questions about why aren’t Republicans getting on board with these Biden proposals? There were Republicans getting on board with overturning the election just a couple of months ago so we shouldn’t have high expectations for that….we did cover the news before Donald Trump came along and we did it pretty well. And, you know, there is plenty of stuff in the news and it doesn’t have to have Donald Trump in the headlines for us to continue to exist, especially when he’s putting out statements, you know, when he was president, he was doing things that were beneath the office of the presidency. Now he’s doing things beneath the office of the post-presidency. He’s not going to change. But we need to change with the times.

STELTER: Right, he’s still saying he was robbed. I don’t think anybody is listening except for the hardcore base. But it is important to note, the Big Lie is still alive and well in the pro-Trump bubble. I can feel like it went away after the riot when reality reared its head. But no, the lie is out there in the pro-Trump bubble.

The reality is that Biden won the election, after all the networks and all the social media sites squashed inconvenient stories like Hunter Biden’s laptop. CNN’s Big Lie is that it’s “Facts First” and shows like Newsroom are primarily “news” and not opinion.