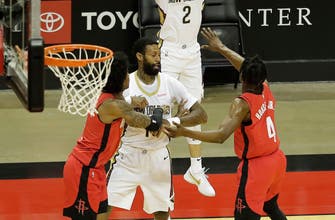 HOUSTON (AP) — Lonzo Ball had 27 points and a career-high eight 3-pointers, and the New Orleans Pelicans beat the Houston Rockets 122-115 on Sunday night to end a two-game skid.

Ball was on fire early, making all four of his 3-point attempts in the first quarter in his return after missing seven games with a hip injury. He cooled off after that and didn’t hit from long range again until the third quarter, when he made two. He had nine assists, and his 27 points tied a season-best on a night he outdid his previous career mark of seven 3s, which he’d accomplished four times.

Kelly Olynyk got the Rockets within four with two free throws with about 2 ½ minutes to go, but Ball’s eighth 3-pointer made it 116-109. Jae’Sean Tate added a 3 for Houston seconds later, and Ball left the game soon after with what appeared to be cramps.

Willy Hernangomez made a dunk with less than a minute to go to push the lead to 118-112.

Olynyk had a season-high 26 points in his second 20-point game in the five games since he was traded to Houston from Miami. The Rockets lost their fourth straight.

Kenyon Martin Jr. had three dunks in less than two minutes to power an 8-4 run that put the Rockets up 102-97 with about 7 ½ minutes to go. The Pelicans used a 10-2 spurt after that, highlighted by a 3 from Ball, to take a 107-104 lead with about four minutes remaining.

The Pelicans had a six-point lead with about 2 ½ minutes left in the third, but the Rockets scored the last nine points of the period, with 3s from D.J. Wilson and D.J. Augustin to take a 92-89 lead into the fourth quarter.

Ball’s big night came in a game where all five starters finished with at least 10 points. Eric Bledsoe had 19, James Johnson added 18, Jaxson Hayes had 11, and Steven Adams had 12 with 11 rebounds.

Pelicans: Zion Williamson missed his third straight game with a strained right thumb. … Brandon Ingram sat out for a third consecutive game with a toe injury. … Nickeil Alexander-Walker injured his lower leg in the second quarter and returned to make one of two free throws after he was fouled on the play but sat out the rest of the game.

Rockets: John Wall was out for a third straight game because of fluid in his right knee. … Danuel House Jr. sprained his right ankle in the second quarter and didn’t return.

Gold medal winning Olympic gymnast Simone Biles attended Sunday night’s game and received a warm ovation when she was introduced during a timeout in the first half.

Berube on Binnington’s fiery exit: ‘He was trying to rally the team’