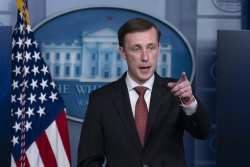 If imitation is the sincerest form of flattery, then President Biden’s professed commitment to conduct a foreign policy that concentrates on advancing the interests of the nation’s working families and middle class pays a striking compliment to his predecessor. Donald Trump achieved an improbable victory in 2016 in no small measure by lambasting the foreign-policy establishment — right and left — for pursuing immigration and climate policies, trade deals, and military campaigns that harmed blue-collar laborers and other middle-income earners. The Trump administration recognized that diplomacy should promote the prosperity of all Americans while giving special attention to those who — owing to workplace automation, open borders, globalization, flawed trade deals, and more — lost opportunities and saw their wages stagnate and manufacturing jobs move overseas.

If, however, administrations are measured more by deeds than by words, then the Biden administration’s focus straight out of the gate on implementing a progressive agenda favored by intellectual and political elites constitutes a repudiation of Trump administration concerns for working families and the middle class.

Joe Biden’s ending by executive order of Trump administration policies and programs that secured the border with Mexico triggered a surge of migrants crossing illegally into the United States. Biden’s cancellation of the Keystone XL pipeline on his first day in office cost the United States thousands of jobs and does not curb greenhouse-gas emissions. And the Biden administration has brought an intensification in the institutionalization of critical race theory throughout the federal bureaucracy — most prominently in the Pentagon, among the nation’s most diverse and integrated institutions. Official promulgation of CRT places many ordinary people, who favor the old-fashioned civility and toleration that require equal treatment of individuals without regard to race, at odds with government-endorsed “equity” doctrine that demands different treatment based on race.

The discord between Biden-administration words and deeds fuels old suspicions and worries that much progressive rhetoric aims to convince ordinary voters that policies at odds with their stated preferences or contrary to their express wishes reflect their true interests.

Within weeks of assuming office, the new administration showcased its promise to put U.S. foreign policy in the service of working families and the middle class. Previewing the president’s first foreign-policy address, National Security Adviser Jake Sullivan pledged, “Everything we do in our foreign policy and national security will be measured by a basic metric: Is it going to make life better, safer, and easier for working families?” In his Feb. 4 speech, the president hammered home the point: “There’s no longer a bright line between foreign and domestic policy. Every action we take in our conduct abroad, we must take with American working families in mind. Advancing a foreign policy for the middle class demands urgent focus on our domestic economic renewal.”

Sullivan (pictured) introduced the case for organizing foreign policy around the middle class in a 2019 Atlantic essay, “What Donald Trump and Dick Cheney Got Wrong About America.” Obscuring the obvious connection between his summons to fellow Democrats to turn to the people and then-President Trump’s considerable support among ordinary voters, Sullivan demonized the Republican in the White House as “hostile toward America’s allies and contemptuous of cooperation.” He added that Trump was worse than an isolationist, “preaching predatory unilateralism” and offering Americans a “false, dog-whistling choice between globalism and nationalism.”

That characterization acrimoniously distorts the foreign policy of — and implicitly rebukes the substantial bloc of working- and middle-class voters who backed — an administration that reinvigorated the Quad to protect a free and open Indo-Pacific, persuaded many NATO allies to share responsibilities by honoring their agreed-upon contributions to national security, elevated the promotion of international religious freedom to a top priority, produced through sedulous diplomacy with Israel and Gulf Arab nations the breakthrough Abraham Accords, and launched the Clean Network to ensure that friends and partners around the world build digital infrastructure using only equipment that protects privacy and security.

Acknowledging, nevertheless, that Trump “has surfaced questions that need clear answers,” Sullivan espoused a foreign policy that seeks to avoid unpopular extremes, rejecting both ambitious nation-building abroad and retreat into isolationism at home. Instead of Trump’s “America First,” Sullivan unveiled “a new American exceptionalism” to serve “as the basis for American leadership in the 21st century.” In fact, he affirmed traditional themes: “The core purpose of American foreign policy must be to protect and defend the American way of life,” Sullivan wrote. This entails “a healthy democracy, shared economic prosperity, and security and freedom for all citizens to follow the paths they choose.” In the service of these worthy goals, Sullivan offered sensible thoughts about American leadership, the China challenge, transnational threats, alliances, the variety of diplomatic tools, and the rules-based international order.

But Sullivan’s moderate pose and traditional language mask a grandiose intention It is one thing to consider “where the middle class fits into America’s foreign-policy priorities.” It is quite another to add domestic social engineering to the foreign-policy establishment’s to-do list. “The country’s entire national-security strategy — the resources it allocates, the threats and opportunities it prioritizes, the events and circumstances it tries to shape, the relationships it cultivates — should more explicitly be geared toward reviving America’s middle class,” declares Sullivan. Yet he provides no explanation of how their training and expertise prepare foreign-policy professionals to assume significant responsibilities for managing the American economy.

Nor does “Making U.S. Foreign Policy Work Better for the Middle Class.” Published in early fall 2020 by the Carnegie Endowment for International Peace, the lengthy report elaborates the idea that the American foreign-policy establishment — having failed at nation-building in other countries — should nation-build at home. The bipartisan task force that produced the report included Sullivan as well as Salman Ahmed, co-editor and project director, who now serves as director of the State Department’s Policy Planning Staff.

The Carnegie report is in many respects, like Sullivan’s article, balanced and reasonable. But, like Sullivan’s essay, the report assumes that the middle class is monolithic. It vilifies Trump administration foreign policy — and also thereby denigrates the sizeable portion of working families and members of the middle class who voted for the 45th president. And while warning against overextension, particularly efforts “to effect broad societal change within other countries,” the report, like Sullivan’s article, envisages a major domestic power grab by the foreign-policy establishment: “A foreign policy that works better for the middle class would preserve the benefits of business dynamism and trade openness — which does not feature prominently enough in the progressive agenda — while massively increasing public investment to enhance U.S. competitiveness, resilience, and equitable economic growth.”

Instead of arrogating to itself power to plan the U.S. economy under the cover of concern for those neither rich nor poor, Biden foreign-policy hands would do well to concentrate on understanding better other countries’ interests, capabilities, and overarching aims. Developing programs to train a new generation of diplomats and security officials in languages and high-tech know-how, for example, would be a constructive step in enabling the United States to meet the challenge to the free and open international order presented by the Chinese Communist Party.

The middle class’s most abiding foreign-policy interest, like that of all Americans, is maintaining the conditions abroad that secure freedom at home.

A Tame Press Conference for a Lame President

The Threat From Anti-Black AntiRacists