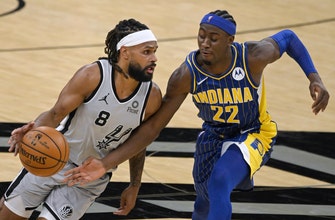 Aaron Holiday, Myles Turner and T.J. McConnell each had 18 points for Indiana. McConnell and Turner combined for 11 points in overtime for the Pacers, who were without Domantas Sabonis, Malcolm Brogdon and Jeremy Lamb.

Spurs veteran DeMar DeRozan had 25 points for his 450th career game with at least 20 points. Dejounte Murray and Keldon Johnson each had 20 points and Derrick White added 18.

Edmond Sumner’s layup off an assist from Levert put Indiana up 126-121 with 1:45 remaining.

San Antonio cut Indiana’s lead to 126-125 with 50.2 second remaining on a layup and a pair of free throws by Rudy Gay. Jakob Poeltl then picked off a wild pass from LeVert in the lane. DeRozan, who made one of two free throws to tie the game at 126, missed an 18-footer at the close of regulation.

The Pacers came within four points of tying their season high for first-half points even with injuries sidelining Sabonis, Brogdon and Lamb. The trio account for 51.5 points per game.

Indiana had only one 3-pointer in the first quarter, but the long-range shooting wasn’t necessary. The Pacers’ first 12 points were in the paint, as were 10 of the Spurs’ first 12.

The Spurs rallied in the second half, fueled by their young trio of Murray, White and Johnson. They combined for 16 points, but their efforts defensively helped erase an 11-point deficit.

Pacers: Indiana had a season-high 71 points in the first half against Memphis on Feb. 2. Sabonis, Brogdon and Lamb all started that game, which the Pacers won 134-116. … Brogdon missed his second straight game with a sore right hip, but was moving freely during a brief, pre-game workout. … Sabonis missed the game with a bruised left quadricep after playing 27 minutes Friday against Charlotte despite the injury. … Lamb missed his third straight game with an injured toe.

Spurs: Johnson joined David Robinson and Tim Duncan as the only players in franchise history with 700-plus points and 330-plus rebounds in their first 60 career games with the team. … DeRozan has 450 games of 20-plus points since joining the league in 2009. Only LeBron James, Kevin Durant, James Harden, Russell Westbrook, Stephen Curry, Damian Lillard and Carmelo Anthony have more 20-point games over that stretch than DeRozan. … Gorgui Dieng remains out with a shoulder injury. Dieng suffered the injury six minutes into his debut with the team. … Lonnie Walker IV missed his seventh straight game with a sore right wrist. … Poeltl had 14 points and 13 rebound for his 10th double-double this season.