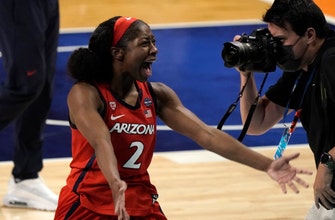 The Wildcats never trailed against the favored and fabled Huskies, who have made the Final Four 13 consecutive times, but haven’t made the championship game since 2016 when UConn won its 11th title.

Arizona held UConn to a season low in points, but still had to hold on late after leading by 14 late in the third quarter as the Huskies made a late push. At the final buzzer, McDonald threw the ball high in the air and was mobbed by her teammates near center court. She shared a long hug with coach Adia Barnes, who starred as a player at the school in the late 1990s.

Arizona (21-5) will play Stanford for the title on Sunday night in an all Pac-12 final.

As she has done throughout the tournament, McDonald did it all for the Wildcats with slashing drives, pinpoint shooting from long range, and a defensive intensity that held UConn’s star freshman Paige Bueckers in check in for long stretches.

Bueckers, The Associated Press player of the year, finished with 18 points and her 3-pointer with 1:23 left got UConn within 60-55 in the final two minutes before Arizona closed out the win with free throws. Christyn Williams led UConn (28-2) with 20 points before fouling out.

The two programs had met once before in the tournament, back in 1998 when Barnes was the Wildcats point guard. UConn won that matchup and now it’s Barnes and Arizona taking the next big step to a championship.

UConn, which has no seniors in the lineup, started slow as the Huskies looked tentative in the role of favorite. McDonald and the Wildcats looked primed for their moment after being left out of the NCAA’s Final Four promotional video on Twitter that had featured the three other teams but not them.

UConn had four early turnovers and missed its first five shots before Bueckers made a 3-pointer to settle the offense, even if only temporarily. McDonald, opened the game with a 3-pointer, made another two minutes later, and scored eight as the Wildcats led 16-10 after the first quarter.

McDonald pumped in two more from long range in the second quarter and the Wildcats led 32-22 at halftime. Bueckers was struggling to get any looks at the basket and finished the half with just four shots and three points.

McDonald cooled off in the third with just two points on two free throws. Still, Arizona briefly stretched its lead to 48-34 before UConn got a 3-pointer from Evina Westbrook to help pull the Huskies back within nine to start the fourth.

UConn had nine turnovers in the first half and just eight made field goals. The 10-point halftime deficit was their largest in the NCAA Tournament since 2007 when the Huskies lost in the Elite Eight by 23 to LSU. When Arizona’s Helena Pueyo made a jumper in third to put the Wildcats up 14, it was UConn’s largest deficit this season.