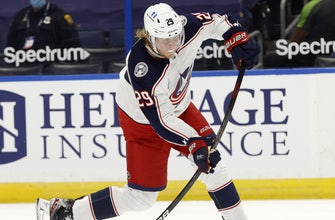 TAMPA, Fla. (AP) — Brayden Point scored twice, including the third-period winner, and the Tampa Bay Lightning rallied past the Columbus Blue Jackets for a 3-2 victory on Thursday.

Ross Colton and Point scored 1:06 apart in the third period to erase a one-goal deficit and snap a three-game losing streak for the Lightning.

Andrei Vasilevskiy finished with 36 saves to pick up the win.

Eric Robinson and Zach Werenski scored for Columbus, which has one win in the past six games.

Elvis Merzlikins finished with 31 saves for the Blue Jackets.

Point scored the winner and his second of the game coming in on a 2-on-1 rush and as he tried to backhand a pass over to Tyler Johnson, the puck ramped off the stick of Columbus defenseman David Savard and into the net at 15:54.

Colton tied the game 66 seconds earlier with a wrist shot from the middle of the left circle, 3:54 after Robinson converted a breakaway for Columbus’ first lead of the game at 10:54.

Tampa Bay took the lead when Columbus was whistled for too many men on the ice while on the penalty kill to give the Lightning 62 seconds of a two-man advantage. Point cashed in with 15 seconds remaining on the 5-on-3 chance with a shot from the bottom of the left circle that powered its way through Merzlikins at 15:45.

The Blue Jackets pushed back in the second period and found the equalizer as Werenski cut across the top of the crease to swat in a rebound off his backhand for the defenseman’s fifth of the season at 9:04 of the second period.

Tampa Bay D Ryan McDonagh returned to the lineup after missing the previous four games with an undisclosed lower-body injury, but the Lightning remain thin on defense. Erik Cernak missed his fourth consecutive game since taking a puck off the inside of his knee on March 22 in Dallas while Jan Rutta was placed on injured reserve after leaving Tuesday’s game against Columbus with a lower-body injury. Tampa Bay called up D Ben Thomas from the Syracuse Crunch and assigned him to the taxi squad.

While Columbus G Joonas Korpisalo returned to the lineup after missing three games with a lower body injury, he dressed as the backup to Elvis Merzlikins, who made his fourth consecutive start, his longest stretch this season.

“These kind of games are going to help me go where I want to go, which is up,’’ Merzlikins said.

Blue Jackets: At Florida Panthers on Saturday and Sunday.

Emmanuel Acho on Travis Hunter committing to JSU: ‘Deion Sanders can shake up college football’ I SPEAK FOR YOURSELF