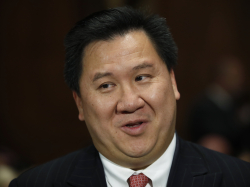 Have you read, heard or seen that important news story about an Asian American federal judge — born in Taiwan and subject to discrimination growing up — who confronted and denounced those who discriminate by race?

With all that’s been in the news lately about terrible anti-Asian attacks, with many pundits engaging, isn’t it odd that the stirring congressional testimony of an Asian American federal judge on a hot-button topic wouldn’t receive widespread national media attention?

His name is James C. Ho. He was born in Taipei, came to America as a toddler and graduated with honors from Stanford University and with high honors from the University of Chicago Law School. He is on the 5th Circuit Court of Appeals, based in Louisiana.

Ho recently testified in a House Judiciary Committee hearing called by U.S. Rep. Ted Lieu, a California Democrat, on the lack of racial diversity on the federal bench.

Ho suggests what many Asian Americans believe to be true in their bones, that the reason for that disparity is generations of discrimination at the nation’s most prestigious universities.

In his testimony, Ho told a story common to many of us from immigrant families.

“Most kids grow up learning English from their parents,” he said. “I grew up learning English from a bunch of puppets, from a place called Sesame Street. My classmates brought a kids’ lunch box to school. I brought a bento box to school. My food seemed normal to me. But it smelled funny to my classmates — or so they would tell me. And I remember racial slurs and jokes on the playground and on the football field.

“But I also learned that, if you work hard and prove yourself, you can find your place in America.”

Judge Ho still experiences racist hate. He says racism isn’t over. Yet he understands the dangers of categorizing, dividing, rewarding or punishing Americans by the use of immutable characteristics like skin pigment.

This is the definition of racism. This is what racists do.

He argues that equality of opportunity, not of outcomes, is fundamental to who we are as Americans.

He also argues that the new policy of “equity” pushed by the Democratic Party — that attempts to guarantee outcomes on the basis of race — is poisonous and racist.

“It means we must do everything we can to ensure that everyone truly has the opportunity to succeed. And it means we must never bend the rules to favor anyone. Dr. King had it right: Choose people based on who they are, not what they look like.

“We must make sure that everyone has the opportunity to learn and to succeed, so that win, lose or draw, at least you got a chance — no matter who you are …

“But here’s the kicker: Once everyone has had full and fair opportunity to be considered, you pick on the merits. Both the Constitution and the Civil Rights Act make it clear that it is wrong to hire people based on race. That’s the law for a wide range of jobs. But it would be especially wrong to select judges based on race.”

“But I would never suggest that a wise Asian would, more often than not, reach a better conclusion than a white judge,” he said. “That would be antithetical to our legal system and poisonous to civil society. No one should ever assume that I’m more likely to favor Asians or immigrants or anyone else — or that my colleagues are less likely to. Everyone should win or lose based on the law, period. That’s why Lady Justice wears a blindfold. That’s why judges wear black robes.”

Stop and consider how quickly we’re being herded down this poisonous path where “equality” is replaced by “equity.” The similar-sounding words are offered up, confusingly, on a regular basis without context in “straight” news media accounts and by Democratic Party politicians as if they were one and the same.

They’re not the same. Only one is about opportunity for all, which is why a poor immigrant from postwar Europe, who plowed his fields with a mule, could see one of his American-born sons rise in government service and another become a newspaper columnist. It is why Judge Ho’s parents came to America.

In high school, Ho’s college admissions adviser told him that his grades and test scores were “all strong enough to get me into my top choice of schools — if I wasn’t Asian.”

Ho is a conservative. If you didn’t read about his comments in the news or hear or see them on radio or TV, you might want to ask yourself: Why not?

It is the message or the messenger?

The Harm Done By Environmentalists