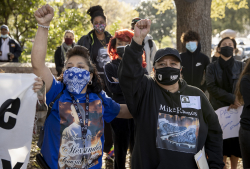 FNC’s Tucker Carlson comments on the hypocrisy of which gruesome on-screen murders get political attention:

TUCKER CARLSON: The George Floyd trial has finally started in Minneapolis — as if we needed any more drama in this country — and the other channels are covering it like a championship game, which makes sense. If your job is to make Americans hate each other, if your job is to divide the country (and that’s how they see their job), the opportunity to talk about George Floyd all day is like your Super Bowl.

On Monday morning, CNN spent hours airing footage of prosecutors questioning one of the emergency dispatchers who happened to be on duty the day that George Floyd died. It wasn’t very interesting and had no inherent news value. “Is that your voice on the 911 recording?” the prosecutor asked at one point. “Yes,” the dispatcher replied, and so it went interminably. Then suddenly, at one point, the feed stopped without warning. Apparently there were technical difficulties. It wasn’t a conspiracy, it was just live TV programing.

But CNN’s control room cut to a legal analyst who assured viewers the pause was only temporary. This isn’t ‘Law & Order,'” the analyst explained. “It won’t all be wrapped up in fifty-five minutes. This could go on a while.” In other words, stay in your seats. Don’t turn away. The trial may be boring, but it’s important.

If the Floyd trial ends in acquittal, there could be riots. We accept that as a fact of life in this country. No civilized country should, but suddenly we do. If there are riots, innocent people may die, as they did in large numbers this summer. CNN will downplay those deaths or justify them as they did this summer and as they have so many times before when those deaths are politically convenient. The point isn’t to save people from dying. The point is to punish you and to change America. So from that perspective, it’s worth it.

That’s why they’re replaying that video of George Floyd dying in the sidewalk, to remind you of your culpability in his death. That’s why, even as they rub the country’s face in the death of George Floyd, there are many other tragic deaths — some on video — they ignore completely.

Here’s one: A 66-year-old Pakistani immigrant called Mohammad Anwar died in Washington recently. As in George Floyd’s case, Anwar’s death was on video. Unlike George Floyd, Mohammad Anwar was not a violent career criminal with a drug habit. He worked at the very bottom of the so-called gig economy and made his living driving for Uber Eats. It’s a tough gig.

On Tuesday, he was driving near Nationals Park in southeast Washington when two girls assaulted him with a Taser. The girls were 13 and 15 years old. Mohammad Anwar resisted. It was his car, the key to his living, and he didn’t want to lose it. A bystander recorded what happened next.

Anwar’s last words were, “This is my car”, and it was. Bystanders watched all of this happen, but no one stepped forward to help Mohammad Anwar. The two girls hit the gas, flipping the car over. Anwar flew out of the vehicle and landed face down on the sidewalk, dead. The girls who killed him didn’t seem bothered by this.

“My phone is in there! My phone!” one of them screamed. She cared more about her phone than the life of the man she just killed. This raises all kinds of questions, not only about them, but about us. What kind of society produced children like this? Who raised them? What does it say about our country that no one jumped in to help this poor man before he was killed?

Those are real questions, but CNN wasn’t interested in asking any of them. In fact, the network refused even to call it a killing, since didn’t help their politics. So in their account, “the girls assaulted an Uber driver with a Taser while carjacking him, which led to an accident in which he was fatally injured.”

“Which led to an accident”. It wasn’t a killing. It just kind of happened. It was an act of God, like a tsunami or a hailstorm. Unfortunately, he died. In fact, as the mayor of Washington, D.C., explained the next day, it may have been Mohammad Anwar’s fault. Mayor Muriel Bowser sent a tweet reminding her subjects to pay attention to their surroundings the next time they go outside.

“Auto theft is a crime of opportunity,” Bowser wrote. “Follow these steps to reduce the risk of your vehicle becoming a target.” Those “tips” included locking your car and not walking away as the engine is running.

Got that, D.C. residents? Staying safe is your job. It’s not the job of the mayor you hired to protect you and who sits barricaded in her home, surrounded by a massive security detail you pay for as the city she’s supposed to protect descends into chaos. No, it’s up to you. You’re on your own. Follow these steps to reduce the risk. Not surprisingly, carjackings are up all over the city, and if you know people who live there, they will tell you that. Neighborhoods that were safe last year, aren’t anymore. There are carjackings going on in residential neighborhoods, a 300% rise over one year, in fact. Shootings, robberies and theft are rising, too. Of course they are. Washington is becoming a scary place again. The capital of our country was also its murder capital in the 1980s. That’s not acceptable for a civilized country, but it’s becoming that way again.

So what happens when you do something like this? Like clockwork, six months after they defunded the police department, Washington, D.C., recorded its highest murder rate in 15 years. When you defund the police, people die. That happens every single time. And that’s why Mayor Muriel Bowser must surround herself with cops. She doesn’t want to get hurt, though she doesn’t care if you do.

It’s a very simple lesson, and everyone knows it’s true. That’s why we have cops in the first place. They’ve never really gotten credit for the gravest policy screw-up maybe in living memory. They defunded the police across the country, and our leaders are ignoring the consequences. Some places are doubling down. In Baltimore, for example, a city that does not need more tragedy, officials have announced they will no longer prosecute what they call low-level offenses, including drug possession and prostitution.

What’s low-level, exactly? That kind of depends on where you live and how much police protection you have. Prostitution and drugs aren’t a big deal if they’re not near you. However, when your kids can’t go outside because prostitution and drug possession are taking place right outside your house, they’re not low-level crimes. They wreck your life. The people who run Baltimore don’t care about this. They have no interest whatsoever in what is happening outside your house. So the mayor of Baltimore and the local prosecutor, recently sent a press release describing this policy as a “success” because it reduced “systemic inequity.” By the way, it also led to lower arrests. Imagine that?

So Baltimore has equity now. What a relief. Many of us are hoping Baltimore will have more equity. What does that look like? Last week, Baltimore recorded seven murders in six days. That’s a killing every day of the week, plus two on Saturday. That’s deeply equitable and it’s happening in cities across the country. Once again, no one’s noticing this, but if you live in one, you well know what’s happening.

In Chicago, for example, the George Soros-funded state’s attorney, a hard-left ideologue named Kim Foxx stopped prosecuting what she called “low-level” crimes. Last year, Chicago Mayor Lori Lightfoot mayor called for an $80 million reduction in the police budget. What happened next? Can you guess? Have you read this story before? Oh, yeah. By January, Chicago’s carjacking problem looked like (wait for it) Washington D.C.’s.

Through mid-March, more than 370 carjackings had been reported in Chicago, the most the city has seen in a three-month period in at least 20 years, maybe much longer.

But it’s not just Chicago. This is happening everywhere is we advance toward a full year of mourning the death of a single man on the sidewalk in Minneapolis. Thousands of Americans have been murdered thanks to the policy changes justified by the death of that man. Ponder that for a minute. Has there ever been a more perverse moment in this country?

It’s not clear what we can do about it, but you can start by telling the truth out loud. According to The Washington Examiner, the murder rate in virtually every city in the United States is at its highest levels in more than two decades. Last year, there were more homicides in the United States than in any year since 1998. How did that happen? Oh, BLM. Thanks, BLM. BLM did this to us while the people who are funding them were posturing about how great they are and how this is going to make America more equitable. Poor people were paying the price with their lives. No one has admitted this, no one is accepting responsibility for it, and no one has been punished for it.

Irony of ironies, few places are more dangerous than the actual physical place where George Floyd died in Minneapolis.

None of this is getting better, by the way. It’s getting worse. Still, no one has asked the most basic question: Why is this happening? It’s not all political. The 13 and 15-year-old girls who killed the Pakistani Uber Eats driver weren’t acting out of political solidarity with anybody. What is that exactly? Why do people do that?

Given the well-documented and multiplicitous disadvantages faced by children who grow up in fatherless families the answer is incontrovertibly yes https://t.co/HJybBh3rmv https://t.co/EtJCQIEcr8

Jordan Peterson sent a very interesting tweet out the other day, just a simple graph of the out-of-wedlock birth rate. Among African-Americans, it was 70%. So if you took the out of wedlock birthrate, broke it down by demographic group, and put it next to the crime rate, one thing you notice they track exactly or close enough to suggest a profound connection.

Why is no one interested in pursuing that? No one even asks why this is happening. You’re not supposed to see how Mohammad Anwar died. Instead, you’re supposed to watch endless loops of video of the death of George Floyd so you can tell yourself it’s all one bad cop or it’s all systemic racism.

But if you look away from the propaganda and you look toward the reality of what’s happening to your country on the streets of Washington or Chicago or Minneapolis, you might have a few questions for the people in power. They’re the ones who created this society. They’re the ones responsible, and that’s exactly the conversation they don’t want to have.

So they tell you much more about George Floyd. Watch the 911 dispatcher testify some more. Just don’t change the channel.