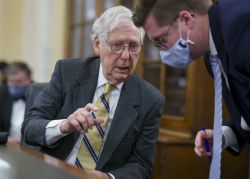 Last Thursday, the Senate voted on a bill to push back the application deadline for the Paycheck Protection Program — the low-interest loan program helping small businesses survive the pandemic — from March 31 to May 31. The bill passed 92-7, and is headed to President Biden’s desk.

If the Senate were actually being held hostage, this measure would not have passed. Admittedly, the bill does not qualify as sweeping legislation. Its passage does not immediately pave the way for the Democrats’ ambitious legislative proposals such as expanding voting rights, investing trillions in infrastructure, addressing climate change, raising the minimum wage or establishing a pathway to citizenship for undocumented workers.

But the PPP extension is more than naming a post office. With the loan program scheduled to expire on Wednesday, blocking an extension would have left 190,000 businesses with pending applications in the cold.

Biden has repeatedly said his top priority is defeating the pandemic and helping Americans get through the pandemic-ravaged economy. If the Republicans’ overarching strategy was to deliberately throttle the economy and hypocritically blame Democrats for Washington dysfunction and reap the political rewards come 2022 and 2024, then the logical course of action would be to filibuster.

“In 2009, President Barack Obama came into office with an enviable level of public support, and he faced an economic crisis for which the other party was widely blamed. Confronted with unified Democratic control, McConnell did not encourage his party to compromise. Instead, he ramped up use of the filibuster to previously unseen levels. Everything that could be filibustered was — even routine and trivial matters, even bills and appointments that the Republicans ultimately planned to support.”

But last Thursday, McConnell not only eschewed a filibuster, he sided with Democrats to squelch a different parliamentary attack. Sen. Rand Paul opposed the bill on the grounds that Planned Parenthood is eligible for PPP loans. The Kentucky senator lodged a point of order that the bill violated a requirement that the cost of programs be offset. Yet McConnell, along with 13 other Republicans, voted with the Democrats and overruled Paul.

This suggests that McConnell is operating under a different strategic framework this time. He is not presuming that the blame for any gridlock and economic stagnation can be easily pinned on Democrats. If bipartisanship makes sense for Republicans, then McConnell will make the politically rational decision to accept bipartisanship.

Granted, the PPP extension was not a difficult bill for conservatives to accept. Republicans helped create the program last year and it was signed into law by President Trump. An extension didn’t require appropriating additional funds. And the bill was backed by the influential small business lobby, the National Federation of Independent Business. So nothing about this vote will encourage Republicans to work with Biden on the progressive movement’s to-do list. Nevertheless, the vote does show Republicans can be convinced that bipartisanship can serve their own political interests, and that fact should inform Democratic legislative strategy.

If Republicans were dedicated to total obstruction of anything and everything in hopes that doing so would serve their political interest, that would bolster the argument for prioritizing filibuster abolition or reform, and channeling pressure toward Democratic holdouts. But if Republicans are rational enough to recognize that some obstructionist tactics can boomerang on them, then Senate Democrats might want to try replicating the political techniques that buoyed passage of PPP extensions for future legislation.

Of course, for most items on Joe Biden’s ambitious agenda, wrangling Republicans support will be exponentially harder. If you believe bipartisanship on the big-ticket items is outright impossible, you will remain inclined to abolish or reform the filibuster.

However, abolishing it lacks 50 Democratic Senate votes, and it’s certainly possible that the votes are also not in hand for any specific filibuster reform. So, for the time being, for any legislation that can’t qualify for the filibuster-proof budget reconciliation process, Democrats should derive inspiration and counsel from last Thursday’s PPP vote, and proceed accordingly.

Sixty is possible, especially if the issue has been kept out of the media spotlight and has not been tainted by polarization.

My Plan To Get Students Back in School Full Time

Summary: President Joe Biden will receive his daily briefing in the Oval Office 2.5 hours before he actually returns from