U.S. Special Operations Command (USSOCOM), which directs counterterrorism and unconventional warfare operations for the military, announced Thursday that Richard Torres-Estrada took over on March 1 as chief of the Diversity & Inclusion unit.

The Pentagon recently formed the unit as part of its push for more diversity in its ranks and chain of command.

USSOCOM welcomes our new Chief of Diversity & Inclusion, Mr. Richard Torres-Estrada. We look forward to his contribution in enhancing the capabilities and effectiveness of #SOF through diversity of talent, helping us recruit the best of the best. #QuietProfessionals pic.twitter.com/Z6aJnz91mx

On June 2, 2020, Torres-Estrada posted a side-by-side photo on Facebook of Trump and Hitler, both holding Bibles. The photo of Trump was taken a day earlier outside of St. John’s Church in Washington, D.C., which was vandalized during protests over the death of George Floyd. 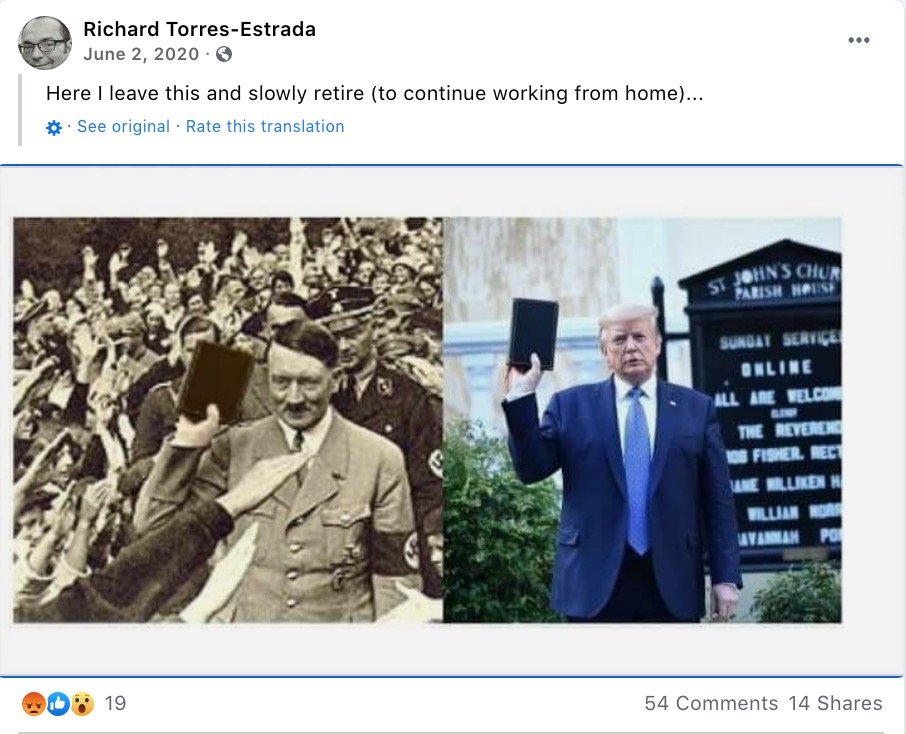 “The point is, they’re the same,” Carlson said of the Trump-Hitler photos. “So, this is the guy who now oversees hiring for the SEALs.”

Carlson asserted that Torres-Estrada’s hiring is one of several recent examples of the Defense Department going “woke,” the term used to describe hyper-awareness about social justice issues.

“The Pentagon is now the Yale faculty lounge, but with cruise missiles. That should concern you,” Carlson said.

USSOCOM describes its mission as developing and employing “fully capable Special Operations Forces to conduct global special operations and activities as part of the Joint Force to support persistent, networked and distributed Combatant Command operations and campaigns against state and non-state actors to protect and advance U.S. policies and objectives.”

USSOCOM did not immediately respond to the Daily Caller News Foundation’s request for comment about Torres-Estrada’s posts.

A spokesman for the command unit told Breitbart News that they are “aware of the allegations and are looking into them now.”

Private Payrolls Added 571,000 Jobs In October As Hiring Heats Up

How the First Amendment Protects the Marginalized and Saves Lives