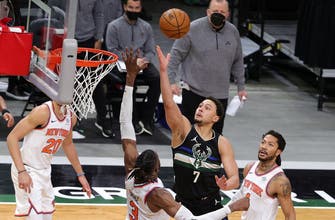 MILWAUKEE — Alec Burks and RJ Barrett each scored 21 points to help the New York Knicks to a 102-96 victory Saturday night over the Milwaukee Bucks, who were without Giannis Antetokounmpo and three other injured starters.

The victory was costly for the Knicks, who lost starting center Mitchell Robinson to a broken right foot in the first quarter. He will be re-evaluated when the Knicks return to New York on Sunday.

Burks’ 3-pointer put the Knicks up 99-96 with 1:19 remaining. Milwaukee then missed its next two 3-point attempts, along with a turnover.

Thanasis Antetokounmpo had 23 points and Jordan Nwora 21 for the Bucks, who lost their second straight after eight consecutive victories.

Despite a patchwork lineup, the Bucks were within 81-77 after three periods.

Burks and Immanuel Quickley opened the fourth quarter with consecutive 3-pointers to put the Knicks up 87-77.

Barrett’s drive put the Knicks up 96-91, but a 3-pointer by Antetokounmpo and dunk by Brook Lopez tied it at 96.

Milwaukee also was without starters Khris Middleton, Donte DiVincenzo and Jrue Holiday. Forward Bobby Portis, the leading scorer off the bench, missed his second straight game due to COVID-19 protocols.

Knicks: Robinson was in his fourth game back after missing 15 games with a broken right hand, which he sustained in mid-February. He was averaging 8.5 points and 8.4 rebounds in 28 minutes per game. Robinson shot an NBA-record 74.2% last season.

Bucks: Are at the Los Angeles Clippers on Monday.