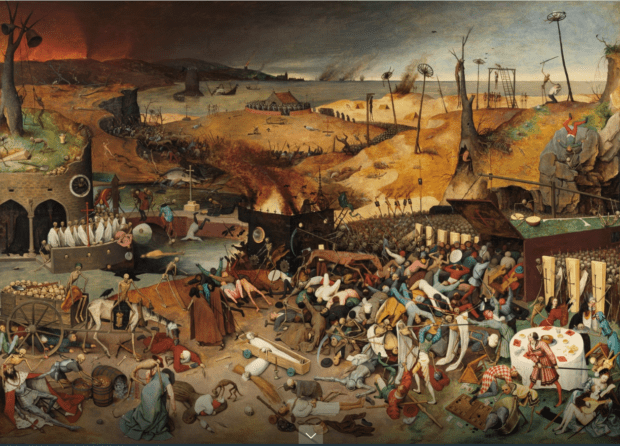 Pieter Bruegel’s painting The Triumph of Death is a frightening work, a “Where’s Waldo” of the 14th-century apocalypse. Not easily mistaken for the triumph of humanity over death, this is Death’s triumph over humanity. An army of skeletons that mercilessly and indiscriminately scorch the earth, pollute and deforest the land, and corral, and slaughter the villagers.

Bruegel’s The Triumph of Death is a Danse Macabre, an artistic style of the late Middle Ages, and mode of expression for the fragility of life and the near-certainty of a young and gruesome death at the behest of an unremorseful natural order. The Danse Macabre reflects the accepted reality of the time, namely that the pre-industrial condition of man was “solitary, poor, nasty, brutish, and short”— a reality reflected with acute accuracy in Bruegel’s Triumph.

However, Bruegel’s work captures something altogether greater than the ceaseless vicissitudes and crushing living standards of pre-industrial civilization. The Triumph of Death captured perhaps the greatest event of mass human suffering in the history of civilization: the Black Death (1346–1353).

Bouts of plague ravaged Europe intermittently from at least 430-1750; however, it was the period of the Black Death that induced the greatest suffering, claimed the greatest toll of life, and laid the groundwork for the fundamental transformation of the world’s economic and social systems.

It is almost unfathomable to contemplate the conditions of a pre-industrial outbreak of plague.

In Bruegel’s haunting work, as the skeletons advance, they lay waste to the landscape and slaughter the people. The villagers can muster no resistance. As the massacre unfolds, a mother collapses, her young child defenseless to fight off the skeletal dog pulling at her blanket. A skeleton atop the box beats his drums while two others ring bells suspended in the trees. In the center foreground, the skeletons have captured the church, there is no God here, the desperate prayers and screams of the villagers go unanswered. In Bruegel’s apocalypse, the rage of death plunders the riches of the kingdom and claims the king, whose time has expired. The unchecked army of destruction carries off man, woman, child, and in the natural landscape in which they reside, nothing and no one is spared.

The Triumph of Death depicts, and was painted in, a time when humanity had only a tenuous understanding of what disease was, what caused it or what could be done to prevent, treat or mitigate the spread and impact of disease. It may be tempting to assume that such a scene was a fanciful depiction, but Brueghel’s painting evoked a certain reality of the plague. Skeletons as agents was obviously fantasy, but the scale and scope of apocalypse is conveyed in a manner that gives the viewer a sense of what it was like to live through those years.

The Black Plague reduced the already slow rate of human progress to a standstill.

Ian Mortimer contextualizes the scale of the scene, in his book Centuries of Change.

“The Black Death killed roughly 45 percent of the population of England over a period of about seven months as it passed over the country like a wave: an annual mortality rate of 77 percent,” Mortimer writes.

To put it another way, the mortality rate in the late 1340s was roughly 200 times that of World War I, Mortimer says. He also offers this comparison of the Second World War.

“[To] replicate the plague’s intensity of killing you would have had to drop not just two atomic bombs on Japan (each one killing about 70,000 people or 0.1 percent of the population) but 450 such devices,” he writes. “That’s two atomic bombs every day on a different city over a period of seven months.”

The social and economic implications of such a loss of life and such a breakdown in society is difficult to convey. Many towns and villages lost not just families, but their entire population.

The bacterial infection that caused Bubonic plague, Yersinia pestis, had a dangerously high case fatality rate, and without modern treatment, somewhere between 30 to 90 percent of those who became infected lost their lives.

The plague would go on to claim “an estimated 30–50 percent of the European population, between 1347–1352,” and induce an incalculable amount of human suffering and economic damage. If you were to scale a similar unchecked outbreak into modern times, it would claim an estimated 2 billion lives. In a population lacking any semblance of germ theory, practical hygiene, or safe waste and burial disposal services, the bodies were left piled in the streets or were thrown into the sea, where they rotted in place or washed back upon the shore and were fed upon by birds and scavengers. Eventually, the bodies were cleared by cart and horse by those still healthy enough to work, further spreading the disease and suffering.

The Black death resulted in an acute drop in living standards, life expectancy, trade, economic output, and agricultural yields. The calamity reduced the already slow rate of human progress to a standstill.

It is almost unfathomable to contemplate the conditions of a pre-industrial outbreak of plague. The death, the immiseration, the fear, the isolation, the filth, the hunger, and the suffering was on a scale that would frighten and bewilder any modern observer.

Place yourself in the tattered leather shoes of a subsistence farmer at the onset of the outbreak. Your eldest son, not yet a man, is the first to succumb to the infection, followed shortly thereafter by the younger of your two sons. Nine days later, your wife, still weak from giving birth two months earlier and still recovering, falls swiftly ill and dies in the night. Your two-month-old daughter stops crying and passes away in your arms of dehydration, hunger, and exhaustion two days later. The following evening, the local Lord puts your home to the torch in an act of council-sponsored sterilization. Hungry, cold, and broken; you look around—bodies line the streets and the carts are laden with the dead; the stench of rotting corpses and animals is impossible to escape. The birds, dogs, and rats scavenge amongst the uncovered dead, it’s enough to turn your stomach.

The pre-industrial world of The Triumph of Death was an existence without surplus, and for more than 99 percent of the population, life was hand to mouth.

You begin to cough, suddenly you realize that you’re not feeling especially well. Any medical care you may be able to receive would almost certainly do more harm than good, and what little care was available was prohibitively expensive and limited in availability. Food has become scarce and the feeling of hunger becomes ever-present. Theft and violence are now even more commonplace than normal, as those who remain alive struggle to feed their families and themselves.

Stories like this were the rule, not the exception, the fate of millions of people living in Europe during the 14th century.

The pre-industrial world of The Triumph of Death was an existence without surplus, and for more than 99 percent of the population, life was hand to mouth, living with no safety net of any kind. The great plagues of the pre-industrial era—and it must be remembered that it was plagues in the plural, as there were many—had no economic “stimulus” packages, no team of scientists fervently working on treatments and vaccines, no advanced or government-sponsored medical care, no personal protective equipment, no food and energy reserves, cripplingly slow and broken communication, little accurate information, no pharmaceuticals or antibiotics and certainly no intensive care beds. This was a world where you prayed not to contract illness, but where you knew you were likely to die a gruesome death at the hands of disease if you did.

As the waves of plague that ravaged Europe finally started to abate towards the dawn of the Industrial Revolution, civilization began the process of turning the tide on plague in earnest. Economic growth and improved living standards helped provide the tools to fight disease, while reducing the living conditions which allowed disease to spread so rampantly.

The economic impact of the Black Death on civilization was dramatic. The enormous loss of life fundamentally restructured the labor force and created conditions that helped, at least temporarily to shift the balance of power and control of the means of production from the feudal hierarchy to the greater people.

Today, we now have at our disposal an unprecedented arsenal of scientific knowledge, technology, medical equipment, vaccines, pharmaceuticals, energy, food, and wealth.

The resulting labor shortage gave farmers, laborers, and professional tradesmen greater freedom and incentive to innovate and to strive for greater production in the output of their work. In many ways, the economic restructuring of Europe following the Black Death was an impetus to the emergence of capitalism and the unparalleled prosperity it would bring to later generations.

Today, we now have at our disposal an unprecedented arsenal of scientific knowledge, technology, medical equipment, vaccines, pharmaceuticals, energy, food, and wealth. At no other time in the history of civilization has our species had the capacity to rapidly develop prototype vaccines and drugs, nor the ability to mobilize enormous measures of energy, food, materials, wealth, science, technology, equipment, or personnel in the battle against disease.

When Pieter Bruegel began painting “The Triumph of Death” in 1562, Europe was experiencing regular outbreaks of plague. The inhabitants had no understanding of what they were up against, no practical or effective way of stopping the disease, and little hope of a better future.

“The Triumph of Death” is a window into the history of our ongoing battle against communicable disease, and a reminder of how far we have come as a civilization.

This article is the second in a 12-part series titled “The Art of Progress,” which explores the evolution of #humanprogress through historic artwork.

The original article can be viewed here. The next article will appear in April.)

‘You Can Live Anywhere But Colorado’: Why Many Remote Job Postings Are Now Actively Excluding One State