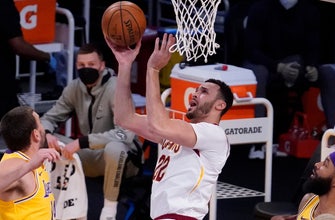 LOS ANGELES (AP) — Montrezl Harrell had 24 points and 10 rebounds, and the Los Angeles Lakers rallied in the second half to beat the Cleveland Cavaliers 100-86 Friday night to snap a four-game losing streak.

It’s the Lakers’ first win since both LeBron James and Anthony Davis have been injured and out of the lineup. James has missed four games after spraining his right ankle on March 20 against Atlanta, and Davis hasn’t played since mid-February due to a right calf strain.

Los Angeles trailed 51-44 at halftime before seizing control in the third quarter, scoring 19 of the first 21 points. Harrell and Dennis Schröder scored five points apiece during the run. The Lakers shot 11 of 19 from the field and held the Cavaliers to 3-of-21 shooting in taking a 72-61 lead at the end of the quarter.

The Lakers largest lead was 19 points in the fourth quarter. Schröder had 17 points and Talen Horton-Tucker added 15.

Larry Nance Jr. had 17 points and 10 rebounds for Cleveland and Darius Garland added 14 points. Jarrett Allen had 13 points and 11 rebounds.

Nance’s dunk off Brodric Thomas‘ missed layup gave the Cavaliers a 47-37 lead late in the second quarter, but things went downhill from there.

Lakers: Davis was re-examined by the team’s medical staff before the game and has been cleared to advance his on court work.

Cavaliers: Travel to Sacramento on Saturday to face the Kings for the second time in six days. Cleveland lost the first meeting 119-105 on March 22.