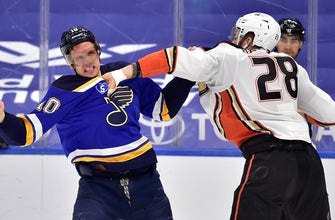 Anaheim goalie John Gibson stopped 33 shots in his first game back after missing five with a lower-body injury. Derek Grant and Richard Rakell added empty-net goals in the final 63 seconds to help the Ducks win for the second time in nine games.

Ryan O’Reilly scored for St. Louis, which has lost three consecutive games and has six in a row at home.

The Blues had won six straight and eight of their previous nine against the Ducks — including the first four meetings this season.

Anaheim scored twice in the second period to take the lead.

Steel scored the first goal at 2:23 when the puck caromed in off his skate. Jakob Silfverberg threw the puck in from the corner. Steel was in front of the net. The puck hit his skate and the fortuitous deflection past Jordan Binnington. It was the eighth consecutive game the Blues allowed the first goal.

Anaheim made it 2-0 when Max Jones scored at 19:07 of the period. Torey Krug turned the puck over in the corner to Ryan Getzlaf. He got the puck to Jones, who skated in, made a nifty move and tucked it around Binnington.

The St. Louis Blues are honoring the life of the late Bobby Plager with a jersey patch that features his retired No. 5 surrounded by a blue heart. The patch will be worn for every game through the end of the season. Plager was an original Blue and played 616 games with St. Louis, posting 20 goals and 121 assists. Known for his famous hip check, Plager, after retiring as a player, served the Blues for more than 50 years in various capacities, including head coach, scout and community ambassador. Plager passed away Wednesday at age 78. In the pregame warm-up, the Blues wore a No. 5 vintage Plager jersey from the team’s first season. The scoreboard had a video tribute to Plager before the game and showed his family there, too.

Anaheim’s D Jamie Drysdale sustained an upper-body injury in the second period and did not return to the game. … Blues D Colton Parayko (back) skated again Friday. He has missed 18 games dating back to Feb. 15. Parayko, who has played 16 games this season with one goal and seven assists, now is listed day by day. … Ducks F Sonny Milano (upper body) remains day-to-day. He has missed 12 games.

Four Anaheim players — Danton Heinen, Ben Hutton, Jacob Larsson and backup goalie Anthony Stolarz — returned to the lineup. They were on the NHL’s COVID-19 protocol list for what was later determined to be a false positive.

The Ducks have acquired right wing Alexander Volkov from the Tampa Bay Lightning in exchange for Antoine Morand and a conditional seventh-round selection in 2023. Volkov, 23, won a Stanley Cup championship with Tampa Bay in 2020. The 6-foot-1, 195-pound forward played in 19 games with the Lightning this season.

The seating capacity in the Enterprise Center was increased to 4,100 fans Friday.

The Ducks will remain in St. Louis and play the Blues on Sunday.