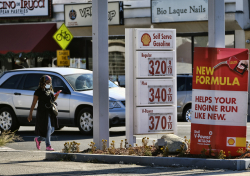 Joe Biden’s first press conference as president this week was style over substance. He took advantage of softball questions from friendly media to run through a list of Democratic talking points. It was reminiscent of another president who infamously emphasized style over substance: Jimmy Carter. In fact, Biden’s presidency is in many respects the modern reincarnation of Carter’s.

Biden and Carter share many personality traits. They are both affable, noncontroversial, everyman politicians who rode widespread resentment toward their elected predecessors to the White House. Yet their parallels extend beyond just character and into the economic conditions during their presidencies. While Biden’s term is only a few months old, it is shaping up to mirror the stagflation and high energy prices that Americans endured in the late-1970s under the 39th president.

Even liberal economists such as Larry Summers worry that the recent $1.9 trillion spending package, ostensibly for COVID-19 relief, may “set off inflationary pressures of a kind we have not seen in a generation.” According to Patricia Mosser, a former Fed economist and now a Columbia University professor, “Uncertainty about medium-term inflation is very high right now.”

Since Biden was elected, average national gas prices have skyrocketed, increasing by about 40% to nearly $3 a gallon. Biden’s strong opposition to traditional energy, reflected by policies such as ending the Keystone XL pipeline, rejoining the Paris climate agreement, and banning drilling on public lands, has contributed to this pain at the pump.

Rising energy prices hurt ordinary small business owners because energy is a top input cost after labor and rent. High energy prices couldn’t come at a worse possible time for small businesses struggling to get back on their feet as the pandemic wanes. Rising gas prices prolonged the economic recovery following the Great Recession and threaten to do so again this time around.

Under Carter, the price of a gallon of gas went from around 25 cents a gallon to over a dollar in a short period due to the Iranian Revolution and misguided federal regulations. Rationing at gas stations meant that some drivers had to go without fuel entirely. High gas prices infected the entire economy, hurting small businesses and increasing joblessness.

Until Carter’s presidency, economists generally took the Keynesian view that inflation directly correlates with employment and economic growth. Yet as inflation surged under Carter, the economy slumped and unemployment rose, giving rise to stagflation.

Biden’s economy is shaping up to be similarly stagnant. Labor-force participation remains depressed, clawing back less than half of its pandemic-related drop. Weekly unemployment claims remain stubbornly near and above 750,000 over the past several months — about triple their pre-pandemic level. Fearful of new taxes and regulations, small businesses are reluctant to hire and expand. More than 100,000 small businesses have gone out of business due to the pandemic. Biden’s policies won’t help them reopen, which is necessary to spur economic growth.

The Carter-Biden parallels extend beyond economics and policy. President Carter lamented “a crisis of confidence … that strikes at the very heart and soul and spirit of our national will.” Carter could have been diagnosing our country today when he said in 1979: “Too many of us now tend to worship self-indulgence and consumption. Human identity is no longer defined by what one does, but by what one owns. But we’ve discovered that owning things and consuming things does not satisfy our longing for meaning.”

Rather than fighting for more checks from the government, de facto universal basic income, and debt forgiveness, Biden should advance skills-training and entrepreneurship to allow ordinary people to land well-paying careers that allow them to support a family and provide meaning beyond just a paycheck.

While the Carter-Biden similarities are ominous for ordinary Americans and small business owners, Carter’s reign ushered in the Reagan Revolution and an American economic resurgence. If Biden is Carter’s modern-day successor, we can only hope the next president will be Reagan 2.0.

The Battle of Bunker Hill Still Holds Lessons for Today