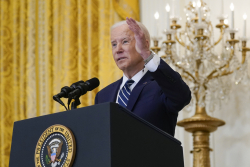 The new president started with good news. Joe Biden told reporters assembled at the White House for his first official press conference that he now expects 200 million doses of the COVID vaccine will be administered by the end of his first 100 days in office. And that’s not all.

He expects the majority of K-8 students will soon be back in the classroom. He announced that more than 100 million Americans have cashed their $1,400 relief checks. He was pleased to report that unemployment is down and economic growth projections are up.

There was more work to do, certainly, Biden admitted, “but I can say to you, the American people, help is here and hope is on the way. Now, I’ll be happy to take your questions.”

And with that brief victory lap, the global pandemic that has taken some 547,000 lives in this country alone was quickly forgotten, at least by Biden’s media interlocutors. The president was confronted instead with questions about voting rights, the situation at the southern border, his plans for the 2024 campaign, the Senate filibuster rule, the lack of bipartisanship on Capitol Hill, American troops remaining in Afghanistan, and more.

It was exactly one hour and two minutes of a certain sort of normal — very different from that of the last four years. The press didn’t shout, and the president didn’t yell or call the reporters names. But the return to normal came courtesy of the same old Biden. For anyone not already familiar, it was an introduction to the 78-year-old politician in all his long-winded, sometimes meandering, gaffe-prone glory.

The difference this time? Biden has the job he’s long wanted. And, like other presidents, he is now buffeted by circumstances and politics outside his control. No. 46 clearly would have preferred to talk about beating back the pandemic, but he had an answer ready regarding the nearly 10,000 unaccompanied migrant children now in federal care and the hundred thousand more illegal immigrants crossing into this country illegally: He said it wasn’t his fault.

“I’d like to think it is because I’m a nice guy,” Biden said when asked about the migrants who have repeatedly told reporters they decided to cross the border now because of the change in U.S. leadership, “but it is not.”

He insisted the surge is not the result of a change in policy, despite the fact that he publicly placed a 100-day moratorium on deportations, reaffirmed his commitment to “Dreamers,” and halted construction of the border wall — all on his first day in office. No, the challenge on the border, the situation his administration has refused to call a crisis, he said, is just the normal cyclical course of events.

“Truth of the matter is nothing has changed. As many people came — 28% increase in children to the border in my administration; 31% in the last year, in 2019, before the pandemic — in the Trump administration. It happens every single solitary year,” Biden claimed, even though data from U.S. Customs and Border Protection shows an increase of 61% in children crossing alone last month, not 28%.

Biden ran for office on immigration reform, of course. He has already sent Congress a proposal to overhaul the system, which includes a pathway to citizenship for millions of immigrants who came to the United States illegally. But the president who reportedly fancies himself something of a second FDR has big plans for everything from tackling climate change to rebuilding the nation’s infrastructure.

What about those topics? Well, Biden said he will keep pressing forward in those areas but it depends a lot on the opposition party. Republicans will have to decide whether they want to be part of the solution, the president insisted, or “just decide to divide the country, continue the politics of division.”

That question, boiled down, has to do with the filibuster. More specifically, with whether Biden wants to see the Senate abolish the parliamentary procedure that allows the minority to block legislation until a 60-vote majority is reached.

“Let’s deal with the [filibuster] abuse first,” Biden said, noting that he wouldn’t oppose certain changes, like making senators filibustering actually hold the floor and keep talking until they no longer can. But while the president said he agrees the procedure is “a relic of the Jim Crow era,” he does not support abolishing it just yet.

“I’m going to say something outrageous,” the president said before noting something he repeated again and again on the campaign trail: “I’ve never been particularly poor at calculating how to get things done in the United States Senate.”

Then came a word-salad: “The best way to get something done, if you hold near and dear to you that you like to be able to … anyway, we’re ready to get a lot done.”

And finally, in the same answer, was a warning to Republicans: “If we have to, if there’s complete lockdown and chaos as a consequence of the filibuster, then we’ll have to go beyond what I’m talking about.”

A filibustering GOP presents an obvious problem for the president. A determined opposition party is getting in the way of his desire to nurture a spirit of national harmony. It remains to be seen whether he can achieve that goal while also enacting his agenda without running roughshod over Republicans. Throughout his campaign, and again in his first weeks in the Oval Office, Biden insisted he is on a mission “to restore the soul” of the country. He even seemed slightly hurt that a cynical press doubted the ability of a creature of Washington to return to the city where he spent all of his adult life and suddenly banish discord.

“I said I was running to unite the country. And generically speaking, all of you said no, you can’t do that,” the president told the press. He still believes this, he added, but with caveats. “I’ve not been able to unite the Congress, but I’ve been united in the country, based on the polling data.”

The White House press corps was not in the mood to push back Thursday. Left unsaid was the fact that, according to the RealClearPolitics average of the presidential approval ratings, Biden has yet to unite the country. While 53% of the public likes the job he is doing, 43% does not.

There were plenty of other questions. Most didn’t lend themselves to the victory lap that the White House would have liked to take on vaccine distribution or stimulus checks. Biden was asked what he thought of Republican efforts at the state level to overhaul voting laws and include new restrictions. He said they were “pernicious” and “un-American” and “sick.” The effort in Georgia, he said in one strained metaphor, “makes Jim Crow look like Jim Eagle.”

When will the U.S. pull out of Afghanistan? He couldn’t say for certain but “can’t picture” soldiers still being there next year.

What about North Korea testing two ballistic missiles over the weekend? The president appeared to read verbatim from a note card a statement about how that nation violated “U.N. Resolution 1718,” but he was “prepared for some form of diplomacy.” How about China? Biden said Chinese President Xi Jinping didn’t have “a democratic bone in his body,” but then launched into a long-winded answer that included the prediction that the grandchildren of the assembled press would write “their doctoral thesis on the issue of who succeeded autocracy or democracy.”

A question about gun control somehow elicited an answer about the importance of timing in politics and a diatribe about “the fact that we are now ranked what, 85th in the world in infrastructure.”

The Washington media is still getting used to the new commander-in-chief they interact with on rare occasions. Biden waited 64 days before briefing reporters, the longest delay in over a century. And while he navigated plenty of questions with ease, more or less, he is still getting to know a press corps that has grown accustomed to the free-wheeling free-for-alls of his predecessor. This came to a head when pushed on his future.

When asked to confirm that he expects to run for reelection, Biden was alternately snappish, ironic, and philosophical. “Look, I don’t know where you guys come from, man!” He said he had “never been able to travel,” adding “I’m a great respecter of fate. I’ve never been able to plan 4½, 3½ years ahead.”

Does he think he will run against Donald Trump? He wasn’t sure: “My predecessor, oh God, I miss him,” Biden muttered. He then said he isn’t even sure the 167-year-old GOP would still be around come 2024, let alone who its standard-bearer will be: “I have no idea whether there’ll be Republican Party. Do you?”

Without saying definitively that the Party of Lincoln would exist and after being pressed on everything from the crisis on the border to Republican obstruction in the Senate, the president up and left on his own cue. “Folks, I’m going,” he said before walking out. “Thank you very, very much.”

White House Chief of Staff Ron Klain then quickly went online to register his pique with the content of the questions. He retweeted several accounts criticizing the press for not asking more about the pandemic — the topic Biden most wanted to discuss. But there will be another time for that, hopefully less than 64 days in the future.

Huawei’s Fall Serves as a Blueprint for U.S.-China Policy