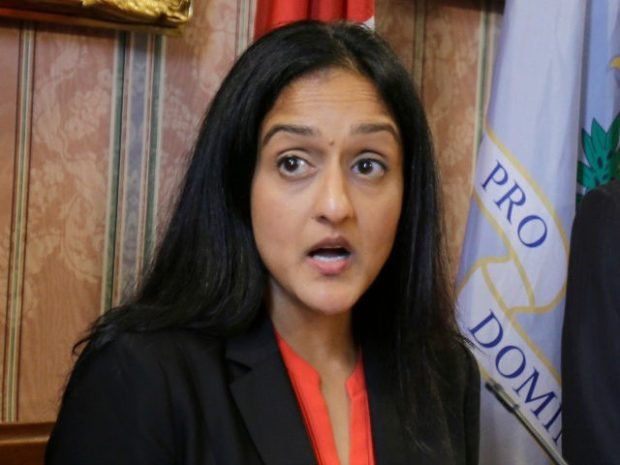 Texas Sen. John Cornyn on Thursday accused Vanita Gupta, the nominee for associate attorney general, of lying under oath regarding her past position on the legalization of hard drugs, which the Republican says should disqualify her from office.

“I believe Ms. Gupta’s deception, her lack of remorse, her dishonesty when it comes to answering straightforward questions disqualifies her for the office of associate attorney general,” Cornyn said in a Senate Judiciary Committee business meeting.

Cornyn was focused on Gupta’s remarks during her March 17 confirmation hearing when asked about her position on drug legalization.

During the hearing and again on Thursday, Cornyn pointed to an editorial that Gupta wrote for The Huffington Post in 2012 in which she expressed support for decriminalizing all drugs.

“States should decriminalize simple possession of all drugs, particularly marijuana, and for small amounts of other drugs,” Gupta and a co-author wrote in the Huffington Post piece.

“To me, the most important word in that quote is ‘never,’” said Cornyn, referring back to Gupta’s answer on March 17.

“Because as you can see it’s simply a misrepresentation of what she said in 2012.”

“Then she lied about it, to you, to me, under oath,” the Republican continued, adding that, Gupta “was unequivocal in her statement that she opposes the decriminalization of all drugs.”

Gupta indicated later on in the March 17 hearing that she has changed her position on legalization of some drugs beyond marijuana.

She said that experiences with family members and during a stint in the Obama Justice Department led her to change her views on the issue.

Democrats defended Gupta against the GOP onslaught on Thursday.

“How many of us have not changed a position on any major issue, and certainly on this issue,” Sen. Dick Durbin, the Democratic chairman of the judiciary panel, said after Cornyn’s remarks.

“I’m struggling to understand the fierce opposition of Republicans to this nominee,” said Durbin, who called Gupta an “extraordinary” nominee.

“Yet she continues to be labeled as soft on crime or wanting to defund police, and there’s no truth to that whatsoever,” Durbin said.

Afghanistan Goverment Brought to you by Bowe Bergdahl