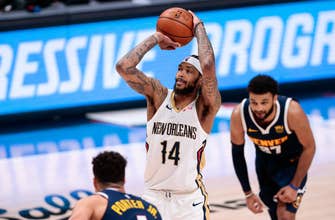 DENVER (AP) — Brandon Ingram and Zion Williamson each scored 30 points and the New Orleans Pelicans overcame another triple-double by Nikola Jokic to beat the Denver Nuggets 113-108 on Sunday.

Nickeil Alexander-Walker added 20 points for the Pelicans, who won the finale of a road trip after dropping their first two games in Portland.

“We executed and they missed some shots. Not a lot,” Williamson said. “We hit some free throws and we got stops when we needed to get them.”

Jokic had 29 points, 10 rebounds and 10 assists for his 52nd career triple-double, including 11 this season. Jamal Murray added 23 points. Ingram said he and Williamson have been building a good rapport offensively.

“We’re figuring out how to stretch the defense a little bit,” Ingram said. “Of course, when we go in, the defense is loading up, so I think today we actually got a chance to play a two-man game a little bit more and it worked out for us.”

The game stayed tight in the closing minutes. Ingram completed two three-point plays around a jumper by Jokic to give the Pelicans a 107-104 lead with 57 seconds to play. Lane violations by Jokic and Murray allowed Ingram to complete his first three-point play after two misses from the line.

Paul Millsap made one of two free throws for Denver, but Ingram sank two more free throws to build a four-point edge for the Pelicans with 29 seconds left.

Jokic then missed a long jumper, snagged the rebound and got the ball to Murray, who also couldn’t connect. The Pelicans added four free throws down the stretch. Nuggets coach Michael Malone noted the disparity in free throws (30 for the Pelicans and 10 for the Nuggets, including none for Jokic) but declared emphatically it wasn’t the reason they lost.

“We lost this game in the second quarter, (outscored) 36-21,” Malone said. “We lost this game because they flat-out kicked our (butt) on the glass (45-37). We knew going in they were the No. 1 offensive rebounding team in the league and if we weren’t going to be able to match that physicality it would make for a long night and that’s exactly what happened.”

The Pelicans led 58-51 at halftime, closing the final 1:17 of the second quarter with six straight points, capped by Eric Bledsoe’s driving layup.

Pelicans: G Lonzo Ball missed the game because of right hip flexor strain. G JJ Redick remains sidelined by a right heel injury that has kept him out for the past seven games.

Pelicans: Return home Tuesday to host the Los Angeles Lakers, who have beaten New Orleans seven times in a row.