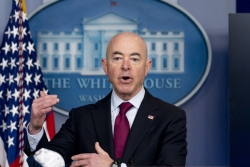 “There is absolutely no immigration crisis on the southern border.” That’s the repeated message from the Biden administration. It simply isn’t true.

Our leaders are telling Americans to ignore the overcrowded immigrant centers and caravans on the way. Don’t look at unaccompanied minors, arriving in record numbers. Those are mere “challenges.” Want to see for yourself? Sorry, no can do. The administration has blocked journalists from inspecting immigration facilities or accompanying the Border Patrol on their rounds. This is not the way to discuss democratic choices. It’s the way to grow mushrooms.

The media blackout and litany of false statements are reminiscent of the most dazzling press spokesman of modern times, “Baghdad Bob.” The mouthpiece for Saddam Hussein during the Iraq War famously told the world press, “There are no American infidels in Baghdad. Never!” What made his statement so memorable was that, just behind him on camera, American bombs were exploding. American troops were swarming into the country. He bravely — inanely — denied it all. U.S. soldiers, he said, “hold no place in Iraq. This is an illusion.” He was soon captured by those illusory troops.

Bagdad Bob set the gold standard for government flacks and the politicians who hide behind them. But he has plenty of imitators. Donald Trump’s first press secretary, Sean Spicer, repeated his boss’s ludicrous claims that the 2017 presidential inauguration was the best-attended in U.S. history. Aerial photographs proved otherwise. But Spicer stuck with his story, to mounting ridicule. He knew who had hired him. Today, his old boss won’t even admit he lost the 2020 election or had anything to do with losing Georgia’s two Senate seats, which cost Republicans control of the upper chamber.

In the annals of public deceit, the Trump administration leaves big shoes to fill. The Biden administration is making an impressive effort to fill them, shoveling steaming heaps of disinformation about its immigration policies. Joe Biden doesn’t do that himself. He avoids answering questions or speaking off the cuff, apparently for good reason. So it’s up to his press secretary, Jen Psaki, and the secretary of homeland security, Alejandro Mayorkas, to explain how the administration is handling immigration. Their answers have only a glancing relationship with the truth.

After considerable prodding, Mayorkas finally agreed to visit the border, witness the problems first-hand, and speak to beleaguered Border Patrol agents and local officials. Following the administration’s practice, he kept the media at arm’s length. He prevented reporters from entering migrant facilities and failed to hold a press conference. Biden himself won’t go near the border.

Meanwhile, Jen Psaki keeps spinning tales to a docile press corps, refusing to use words like “crisis” or “emergency.” She did blurt out “crisis” once but quickly realized the error and retracted it. She had committed what Michael Kinsley famously dubbed a “Washington gaffe,” where you accidently tell the truth.

If the problem at press briefings is deceit, the problem at the southern border is far worse. The hard truth is that there isn’t just one crisis, there are three — all intertwined and mutually reinforcing. One is the humanitarian disaster on the border and in Mexico, where migrants pay criminal gangs to lead them north from Central America. En route, they are exploited, some horrendously: raped, robbed, starved, left to die in the desert, or drowned trying to swim across the Rio Grande. The carnage is horrific.

The second crisis is a breakdown of our own country’s rule of law, encouraged by the administration’s fiat policies and its refusal to admit obvious failures. Laws regulating who can enter and stay in the country are basic to any nation’s sovereign authority, including our own. To demand enforcement of those laws is not a criticism of immigration. It’s a criticism of illegal immigration and the government’s failure to stop it.

Progressives now consider the very term “illegal immigration” so toxic they refuse to utter it. They pour scorn on anyone who does. The Biden administration adheres to that script. They soften (and distort) the issue by speaking only of “undocumented” immigrants, as if they somehow left their papers in the top dresser drawer. The administration is even test-driving new language to replace “illegal border crossing.” Their new, disingenuous term is “irregular.” Can’t these people talk straight? The short answer is “No. No, they can’t.”

The third crisis is a dust storm of deception and secrecy by the very politicians who produced this mess. Despite mounting evidence, they refuse to acknowledge the gravity of the problem. They deny all responsibility for creating it. And they prevent American citizens from seeing what is happening on border patrols and in detention facilities, some of which are now five to seven times over capacity.

What’s the justification for this media blackout in a democracy? None really, beyond political self-protection. The Biden administration didn’t pay for these facilities; American citizens did. Their elected representatives passed the laws being willfully ignored. These citizens have every right to see what is happening — and to demand something better.

Journalists should insist on transparency. They should demand to know why the Biden administration abolished an effective policy that kept asylum seekers in Mexico. Remember, U.S. courts ultimately turned down three-quarters of those applications and an even higher percentage from Central America.

Given those numbers and the huge backlog of court cases, it made sense to keep applicants in Mexico and to send a strong, clear message to Central America and beyond: Seek asylum only if you have compelling claims.

The new administration did exactly the opposite, ending those policies with a stroke of Joe Biden’s pen. Now, anyone who manages to get across the U.S. border can claim asylum. They will be processed by Customs and Border Control, released into the U.S., and told to come back later for a court date when their asylum claims will be heard. Few will bother.

What is the rationale for these new policies, aside from appeasing progressives and reversing anything Trump did? Why stop construction on a border wall that has already been authorized and funded by Congress? The 1974 Budget Impoundment Act requires the president to spend those authorized funds. He has no discretion in the matter. That law was passed by a Democratic Congress over President Nixon’s veto, specifically to limit his “imperial presidency.” It applies to would-be emperors from either party.

The most pressing questions should be obvious. When will the Biden administration recognize its immigration policies have failed? When, if ever, will it summon the political will to reverse those policies? It will take gumption since it means doing two things politicians hate most: admitting their mistakes and facing down supporters who promoted the failed policies. It also means talking honestly to the American people, letting them see what is really happening at the border, in facilities they paid for. It’s time to end the secrecy and deceit. It’s time to admit these unforced errors and start solving the problems they created. Actually, it’s long past time.

Charles Lipson is the Peter B. Ritzma Professor of Political Science Emeritus at the University of Chicago, where he founded the Program on International Politics, Economics, and Security. He can be reached at charles.lipson@gmail.com.

The Biden Admin Is ‘Blatantly Lying’ To The American People About The Border Crisis, Former Trump Officials Say