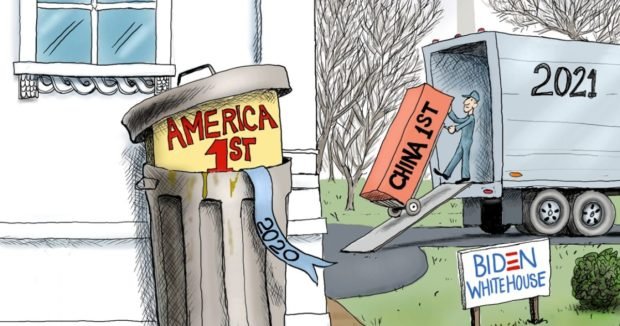 Friday was a terrible, horrible, no good, very bad day for Joe Biden and his administration yesterday. What’s worse is it was a bad day for the United States of America.

Joe Biden fell on the stairs up to Air Force One earlier and, even before that, his administration was insulted and batted around by Russia and China. The opening remarks in Anchorage, Alaska were agreed to be two minutes each. However, the CCP delegation opened with 20 minutes of blasting Biden policies, BLM, Inc., division under Biden, and the most stinging rebuke coming when they said the US is no longer a world leader.

Let me repeat that. The Chinese Communist Party stated that the United States of America, the greatest country that has ever existed, is no longer a world leader!

China pointed its finger at Biden’s Secretary of State and said that the U.S. is no longer in a position to criticize them. What’s worse is that Secretary of State Blinken sat here completely emasculated. The CCP’s representative said the US no longer had the “qualifications” to “speak from a position of strength” — because of the BLM, Inc. and treatment of Black people within our country. They hurled the Democrats’ propaganda, legacy media talking points back in our face and made us look horrible!

JavaScript is not available.

CCP delegation came to US soil and told the US government to their face they are weakTotal disaster for unprepared Blinken pic.twitter.com/TRPaVJOEsk

Blinken’s feckless response to the Chinese showing us who’s boss was followed by attacking former President Donald Trump with a left-handed comment about the US being “back.” Moreover, he didn’t dispute or challenge the accusations about the absurd BLM, Inc. propaganda or put that in perspective with the Chinese running concentration camps or they knowingly released a virus that absolutely crippled the entire globe! Instead of walking out, Blinken and the US delegation sat there and allowed us to be looked like the wimp on the playground.

None of this would have even been considered under President Donald Trump, despite the fact that the Trump administration showed them who was boss. The former president pressured China on the Uighur Muslim’s being held in concentration camps, over Hong Kong, and certainly reminding the world that COVID was actually the Chinese coronavirus. China never responded to Trump the way they did to Blinken yesterday. I don’t agree with Blinkin or the approach Biden is taking on the global stage; however, I am certainly a proud American first, and conservative second.

Pompeo had some good advice for the Biden folks, for both Russia and China.

JavaScript is not available.

Sadly, Pompeo wasn’t there and all the wishing in the world wouldn’t have made it so. Peace through strength, a concept great presidents have utilized in the past, continues to prove to be the correct way when dealing with a global power intent on the continued stealing of our tech and more. Projecting weakness, as the Biden team has been doing, invites aggression.

But Biden comes from the flexible legacy of Barack Obama who never met a bow he didn’t like and showing his “flexibility” to folks like Vladimir Putin. Additionally, it is well known that Biden and his family have personal investments within China and they are continuing to sacrifice our global presence for his monetary gains!

Ultimately, Biden and Blinken should call Secretary Pompeo immediately and seek his advice on how to stand up to the playground bully. I won’t hold my breath. Personally, I don’t believe they really understand what real strength looks like let alone knowing how to demonstrate it. Moreover, they have no idea how bad they made the United States look and how weak they truly are.