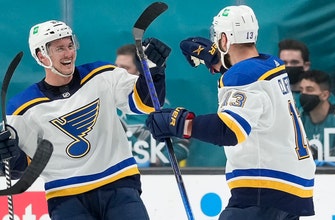 “We finally won a game,” Tarasenko said. “This is a really nice feeling. I was missing this. It’s nice to be in the locker room after wins.”

It was the first win Tarasenko had played in since Oct. 24, 2019, when he injured his shoulder. He returned for the bubble and played in four losses last summer, then didn’t play this season until the start of the five-game losing streak.

Tyler Bozak scored a short-handed goal on his 35th birthday to tie the game in the third period. Jordan Binnington made 30 saves and helped the Blues kill a penalty in overtime.

“We did it the right way,” Binnington said. “We played a very strong game. We were connected out there supporting each other. Tracking in the D-zone was very strong, breakouts were very smooth. We have to build off this and carry it into tomorrow.”

St. Louis won it in the shootout when Brayden Schenn and Tarasenko scored against Martin Jones. Binnington sealed it with a save against Kevin Labanc in the seventh one-goal game in seven meetings this season between the teams.

Ryan Donato scored his first goal in 21 games and Jones made 33 saves for the Sharks, who lost for the second straight game after taking a lead into the third period. They blew a 3-1 lead Wednesday in Las Vegas.

“It’s very disappointing to give them points,” captain Logan Couture said. “I thought the first two periods we had a lot of good chances to score. If we hit the net on a few of those we’d be up by more than one. Some of those chances if we bear down on then it’s a 2-0 or 3-0 game, not a 1-0 game.”

The Sharks did get the the game’s first goal late in the second period after killing off their second penalty for too many men on the ice.

Donato came out of the penalty box and joined an odd-man rush. He took a drop pass from Marcus Sorensen, hesitated for a moment and beat Binnington for his first goal since Jan. 26 at Colorado.

The Blues tied it early in the third with a short-handed goal. Kyle Clifford won a battle for the puck behind the net, then skated around the goal and sent a puck in front that deflected off Bozak’s leg and in to make it 1-1.

“For me the bottom line is part of our 60 minutes is special teams as well,” Sharks coach Bob Boughner said. “I thought our PK was solid but our power play wasn’t. We had an opportunity to win it in overtime and didn’t and we gave up a shorty.”

Jordan Binnington on the @StLouisBlues‘ shootout win over the #SJSharks: “I think that’s the win we needed right now.”#stlblues pic.twitter.com/5F6uZxSFII

The Blues got forward Jaden Schwartz back in the lineup for the first time since he sustained a lower-body injury on Feb. 12 at Arizona. St. Louis then lost another forward to an injury in the first. Oskar Sundqvist had to be helped off the ice after Clifford’s knee hit him in the back of the left leg. Sundqvist stayed down for a few minutes and was unable to put any weight on his left leg when he went back to the locker room. He didn’t return to the game and will undergo an MRI on Saturday.

Sorensen returned to San Jose’s lineup after missing eight games because of an apparent false positive test for the coronavirus. County rules require a one-day quarantine following a positive test even if a player tests negative multiple times after that the way Sorensen did.

The teams finish up the back-to-back with their final meeting of the regular season on Saturday night.

For Aaron Rodgers, all of a sudden, it’s about the money — Greg Jennings I FIRST THINGS FIRST