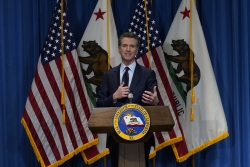 Gov. Gavin Newsom is in trouble, and he knows it. The deadline to submit signatures on petitions for his recall is Wednesday and its proponents are poised to put his fate on the ballot later this year.

Newsom’s current political challenges appear to stem from his uneven handling of the state’s response to COVID-19 and the extended closure of California’s schools. All of this was punctuated by his attendance at a lobbyist-hosted dinner at the French Laundry restaurant last year in violation of his own public health orders.

The seeds of Newsom’s recall, though, were sown long before the first COVID-19 case appeared in California. Indeed, they can be traced to the lack of accountability that comes from one-party rule in a state where Republicans haven’t won a statewide election since 2006 and find themselves in a tiny minority in both chambers of the Legislature.

There are elected officials who could hold the governor accountable. California has seven other statewide constitutional officers, all of whom have jobs independent of the governor. The Legislature has 80 Assembly members and 40 senators, accountable to the voters of the districts they represent. But when most political leaders in the state are focused on protecting a governor from their own party, problems are ignored or covered up.

The thorniest issue for Newsom right now is the continued closure of many California public schools. His hesitancy to press aggressively for faster in-person reopening of the schools, as other governors have done (including Massachusetts Gov. Charlie Baker, a moderate Republican), is a classic case of regulatory capture. The state’s largest teachers union, the California Teachers Assn., has been one of Newsom’s biggest political boosters. In turn, the CTA’s generally skeptical view of reopening has driven the governor’s hesitancy to be bolder about pushing for a return to full, in-person instruction in the state’s public schools.

The CTA has long been one of the state’s most influential political forces. But no single politician in California received more campaign money from the teachers unions than Newsom. The CTA was Newsom’s top donor during his 2018 campaign, giving more than $1.1 million to him and groups working on his behalf.

Newsom’s posture on school reopening is not surprising. He signed legislation that sends incentive payments to schools for reopening if they meet an absurdly low standard — just one grade between seventh and 12th has to be opened and, even then, for hybrid instruction. Although some Democrats have pressed for faster reopening, these voices have been overshadowed by those friendly to the CTA’s more conservative position. And given the lack of robust political opposition to Newsom, detrimental policies that keep kids out of the classroom remain in place.

The lack of accountability in state government also extends to the debacle at California’s Employment Development Department, which runs a state unemployment insurance program that paid more than $11 billion in fraudulent claims in 2020, including at least $1 billion paid to inmates. The program also incurred a long enrollment backlog once this fraud was exposed, leaving some law-abiding Californians without benefits for months.

The official in charge of the program, Newsom’s labor secretary, Julie Su (now President Biden’s appointee to be the deputy secretary of Labor), made a series of bad decisions during the pandemic, including abandoning anti-fraud measures designed to determine initial and ongoing eligibility for unemployment insurance payments. According to the California state auditor, the fraud perpetrated on the state’s taxpayers could have been prevented had agency leaders, under Newsom’s watch leading up to the pandemic, bolstered efforts to verify the identities of claimants in the program. Su has acknowledged that the EDD was “woefully unprepared” to administer the unemployment insurance program effectively with the influx of new applicants after California’s economy shut down last year. But neither she nor Newsom has been held accountable for this lack of preparation.

California’s problems aren’t limited to the state unemployment insurance program. There’s the high-speed train to nowhere that began in earlier administrations but is beset by cost overruns and missed deadlines. Or the In-Home Supportive Services program, which is supposed to provide at-home care to disabled and elderly Californians but has left tens of thousands without the care they need. And, of course, a homelessness problem that has gotten worse because policymakers don’t have a coordinated strategy to address the problem.

It’s tempting to think that Newsom is in trouble solely because of his failings during the pandemic. But frustration with state government goes much deeper. The recall movement is part of an effort to demand some accountability — whether through Newsom’s recall election in the fall or in regular statewide elections next year.

Podcast-palooza: 3WHH, and The Ricochet Show