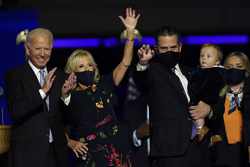 President Joe Biden’s handlers are still shielding him from full-blown news conferences with reporters, but they let him talk directly with Chinese President and Communist Party General Secretary Xi Jinping?

Ye gods! What were they thinking, letting Biden talk to Xi Jinping?

Xi Jinping wants to eat our lunch, the president said after talking to the communist leader in February.

“If we don’t get moving, they are going to eat our lunch,” Biden said.

Yet a couple of years ago, Biden insisted that China would never be able to eat our lunch. “China is going to eat our lunch? Come on, man,” the former vice president said in 2019. “I mean, you know, they’re not bad folks, folks. But guess what? They’re not competition for us.”

But now they want our lunch?

With China pushing around our allies Taiwan, South Korea, Japan and Australia on everything from China’s territorial ambitions to a desire to control rare metals necessary for high technology, this lunch-eating business is dangerously confusing.

C’mon, man. Are they going to eat our lunch or not?

High-level discussions were scheduled for this week between Secretary of State Anthony Blinken and White House National Security Adviser Jake Sullivan, and their China counterparts. Blinken and Sullivan are capable, serious people who will try to undo whatever damage may have been caused by the president, but they might need help. They might need advisers with real firsthand China experience to guide them.

Why not enlist the president’s son Hunter Biden, who has oodles of experience dealing with China? And he’s the smartest man Biden knows.

Who says? The president says.

“And he’s a grown man, he is the smartest man I know, I mean from a pure intellectual capacity,” Biden said of Hunter during the presidential campaign.

And what of Hunter’s China experience? Homeric. In 2013, Hunter flew to Beijing on Air Force Two with his father, who was vice president and President Barack Obama’s point man on China. It was then that Hunter reportedly met influential investment banker Jonathan Li.

“Hunter told the New Yorker he just met Mr. Li for ‘a cup of coffee,'” the BBC reported. “But 12 days after the trip a private equity fund, BHR Partners, was approved by the Chinese authorities. Mr. Li was chief executive and Hunter was a board member. He would hold a 10 percent stake.”

Diplomacy is boring, but sometimes luck lands on the foreheads of the deserving and showers them with treasure.

And just how lucky is Hunter? He gets off the plane, follows his dad down the ramp and then gets cut in on big China deals? He is a smart man.

Now Hunter is under federal investigation over tax issues relating to those China business dealings, including a huge diamond given him as a gift. But he is the president’s son. It should disappear, like the Durham report. There is a Chicago Way and there is a Washington Way.

But you’d think he might take some time out to help his pops. C’mon, Hunter. Dad needs you.

Another China expert who isn’t at the table — but should be — is U.S. Rep. Eric Swalwell, a California Democrat and member of the House Intelligence Committee where America’s top secrets are discussed. Swalwell made some news awhile back when it was revealed he’d been targeted by Chinese spy Fang Fang, who helped him get elected to Congress.

You would think a politician who had been compromised by Chinese intelligence might not be on the House Intelligence Committee, but if you think that, you don’t know politics. The Democrats who run things, including House Speaker Nancy Pelosi, defend him.

I know that some of you are probably thinking that I’m a partisan. But unclench your tiny fists of rage, my liberal friends.

Elaine Chao, the former secretary of transportation in the Trump administration, who is married to Senate Minority Leader Mitch McConnell, also has expertise.

Chao’s family has been an influential player in China shipping for decades. According to The New York Times, “Elaine Chao has boosted the profile of her family’s shipping business, which benefits from industrial policies in China that are roiling the Trump administration.”

Her husband, McConnell, might help the Biden administration, too, in the spirit of bipartisan cooperation.

And don’t forget Richard Blum, husband of U.S. Sen. Dianne Feinstein. Feinstein had denied that her husband had investments in China. But according to The San Francisco Examiner, Blum’s investment firm “pumped millions of dollars into firms doing business in China while Feinstein was boosting expanded trade between China and the United States.”

And of course, Feinstein was allegedly targeted by a suspected China spy, who served as her driver and aide for two decades.

Maybe she could help too.

Biden was scheduled for an interview with Stephanopoulos to air Wednesday. Do you think he’ll answer tough questions on China?

Stephanopoulos is a former Clinton administration aide who dropped $75,000 on the Clinton Foundation without telling his network bosses. And he still has his job.

The president’s interview with his buddy will suck up the media oxygen, upstaging his administration’s China talks in Alaska.

And few will worry about what China having for lunch, until, of course, they eat it.

Gas and Oil: Anywhere But Here