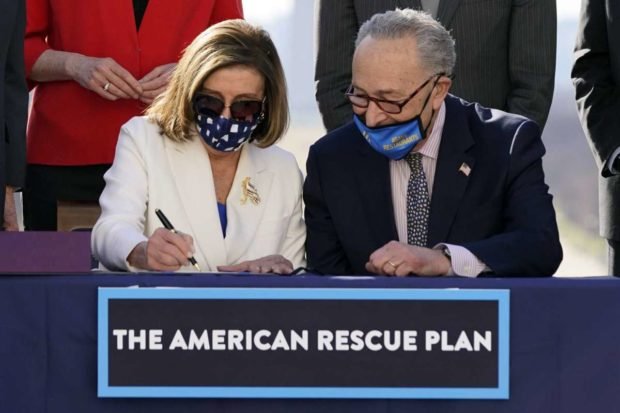 In this installment of our weekly conversation, PF Whalen and Parker Beauregard of The Blue State Conservative review the past week’s enormous toll on individual liberty and federalism.

Parker: In the past week alone, Democrats continued to push this country toward/over the brink with their social justice policies and endless spending. The largest such bill crossed Biden’s desk this week in the name of Covid relief, but neither of those titular pieces are accurate. Very little of the spending address Covid – and even less goes to people impacted by the government’s response to Covid – and it can hardly be considered a relief when it begets more problems than solutions.

In terms of absolute dollars, an estimated $500 billion goes directly to Americans’ pocketbooks. This is a crime. Now, the amount that should have been spent on a relief bill at the tail end of the fear-laden response to Covid should be $0, but since the spending was going to happen regardless of right and wrong, then the next correct amount should have been ALL OF IT. How does anyone with morals and scruples justify the Democrats’ party-line vote to send just one-quarter of federal stimulus money to citizens? The government is supposed to represent us and the solutions they provide are supposed to protect and help us. Both the elected officials and the people that vote for them own this immoral and corrupt spending package. If we do not get to the specific details in this column, suffice to say that tens and hundreds of billions of dollars are being spent to salvage mismanaged blue state coffers and sent overseas, among other disasters.

In terms of relief, it is impossible to comprehend how the continuing money printing ends well. For starters, how does $1,400 help anyone? That’s barely a mortgage payment for one month. The nefarious motives are inseparable from the cash payment. This is a move toward reliance on government handouts and through unavoidable inflationary tactics a devaluing of the US dollar so that we can move toward what people are calling globalized bank credits and SDRs. It has nothing to do with helping anyone. If it were, they would have allocated all of the money according to Paul Gosar (R-AZ) and cut a check worth $10,000 for all Americans. Or, they would have stayed out of the lockdown and business of spreading fearporn and just let Americans respond to Covid according to their comfort levels.

PF: The $1,400 won’t help anyone, at least not in the long-term, but that’s the point. The Democrats are making their case to potential voters: come feed at the government teat. Get them hooked on government checks, convince them they’re victims of one injustice or another, and then promise them more money in the future if they get reelected. What’s most troubling is that it’s working, at least to some extent.

A recent poll by CNN shows that 61% of Americans support the bill; and while I normally don’t trust a word that CNN says, I would bet this number isn’t too far off. People like free stuff, and unfortunately we have a lot of Americans that don’t understand basic economics, and almost as many that don’t pay federal taxes. So, if you think money grows on trees, and if it’s not costing you anything at the moment, what’s not to like about $1,400 checks in your mailbox?

Very little of this bill is actually going towards COVID related programs. It’s an omnibus spending bill, it’s full of pork, and it really has nothing to do with the pandemic – which makes sense because we are in the final days of the crisis. The bill is about Democrats enacting as much of their radical agenda as possible. We have many in Congress who, like many Americans, lack a fundamental understanding of macroeconomic principles. Rep. Alexandria Ocasio-Cortez (D-NY), for instance, actually celebrated when Amazon decided not put their second corporate headquarters in her home state. That move cost New York thousands of jobs and billions in revenue, but AOC thought it was wonderful.

There are other Democrats, however, who know full well what they’re doing. They’re blowing out our spending, feeding their pet projects, and doing it all with little or no concern for the impact on our future. Hyper-inflation is inevitable, that’s what happens when we spend mountains of cash that we don’t have. And when that inflation hits, it will essentially be a tax; a tax that will hit the least-wealthy Americans the hardest.

Parker: Hyperinflation might become the Word of the Year for 2021. On one hand, it’s good that we’re more aware, but it’s infinitely worse because that just means it’s becoming more real and imminent. That might be a separate article altogether, but we could explore how people are preparing for such a time. As the saying goes, it isn’t a matter of if but a matter of when. As a preview, I am investing in precious metals (specifically silver) and various cryptocurrencies.

In any event, the worst part of the bill is the blatant bribery of the American people. When Georgia hosted its run-off election for two U.S. Senate seats, Joe Biden campaigned down there promising immediate $2,000 checks if he won. Andrew Yang has based his entire political career on offering people other taxpayers’ money. It is illegal to bribe, so I continue to remain dumbfounded as to how this goes unchecked and unchallenged. How is Biden’s promise of “free” money in the form of stimulus checks or Yang’s interpretation of tax dollars as “Universal Basic Income” allowed? If Biden handed out $20 bills at the polls, he would be fined. However, if he writes a check worth 70 times that amount after getting into office, we celebrate his support of the hard-pressed American family. Unbelievable.

PF: It’s hard to decide what aspect of the bill is more egregious for me: the handouts to public unions, or the bailouts for blue states. If I had to choose, I’d probably pick the latter. There’s $350 billion in the bill to bailout local, state, and tribal governments, which means federal tax dollars are going to go to Democrat-run states and cities to make up for their incompetence and leftism.

We could see the blue state bailout coming from a mile away. It’s like the quarterback who telegraphs his passes, only we watched it in slow motion. The pandemic came last spring, and many blue states acted as if the impact of their decisions on their economies was irrelevant. Unemployment, tax revenues, bankrupt businesses: who cares? Democratic governors – not all, but many – saw an opportunity to seize control of their citizens’ lives, and they jumped at it. And in many cases, such as New York and New Jersey, they destroyed their economies while still seeing the two highest deaths-per-million of any state in the country.

We can see the disregard for economic impact continuing even today. While many states are going all out to reopen, many states, most of them blue, continue to act like the pandemic is raging. They can’t bear to watch that power and control slip away. You and I both live in blue states, and they both suffered economically because of ridiculous policies by our governors. But at least in our cases, we elected those governors; even though neither of us voted as such. Residents of Florida, Texas, Arizona and elsewhere – states that acted responsibly and were careful not to dismiss the economic effects of their actions – will now watch their tax dollars go to states that behaved from the beginning as if they knew Uncle Sam was going to come to the rescue. It’s not right.

Parker: I know you have a few more points you want to make on the Covid relief bill, which as we established earlier is neither relief for the American people nor related to Covid), but I am going to remark tangentially.

Despite having accepted that most Americans are simply along for the ride, there is only so much more abuse free and decent people can put up with. Red states, though not without serious flaws themselves, nevertheless operated with much more caution and common sense during the pandemic. For them to be thrown scraps while their neighboring blue states, which racked up massic debt both before and during Covid, are now feasting on sumptuous handouts is criminal immoral. It is criminal because it is thievery of tax dollars. That money belongs in workers’ pockets. It’s immoral because Democrats unanimously voted for this bill along strict party lines knowing full well what outcomes would occur. They know it’s stealing and they know it rewards bad behavior, but they don’t care. Again, how much more do red states and conservatives across the nation endure this treatment? Whether it’s secession, a political awakening, I don’t know, but something has to give. If not, when does it turn violent?

PF: We can already see where the Democrats are taking their narrative with this bill. They pumped up its exposure as much as they could, with Biden making his primetime address to the American people, and then the Rose Garden celebration with Biden, Harris, Pelosi and Schumer. Now millions of people are going to get $1,400 checks, and the Democrats will be sure to remind them of those checks as often as possible. The bill is popular right now, and they’re going to try to keep it that way.

When the economy bounces back – which was going to happen with our without this bill – Biden and the rest will try to take credit, and point to this bill as the catalyst for that rebound. It’s all very predictable. As they hold up this bill as a huge success, they’ll use it to make their case for similar spending in the future, and make that point their centerpiece for next year’s midterm elections: elect Democrats, and we’ll keep giving you free stuff.

Republicans, however, need to stand their ground. Fiscal responsibility might not be popular with everyone, but it’s the right thing to do and the GOP needs to educate people on why that’s the case. Not a single Republican voted for this bill, and they should stand by those votes. We have to hope that enough people recognize the Democrats’ strategy for what it is and vote accordingly.

The GOP should also work to expose Biden and the Dems for their clear dishonesty. They’re trying to take bow for solving COVID, when their actions had nothing to do with it. Some people will buy-in to that nonsense, but there will be a lot who don’t. While everyone knows American voters have a short attention span, Democrats are banking on us having short memories as well, and I don’t think that’s the case. The economy was red hot before COVID, and the pandemic was on the decline before Biden took office. Don’t back away from those facts Republicans, embrace them.