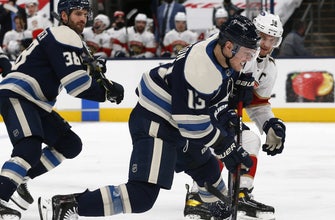 COLUMBUS, Ohio (AP) — Alexander Radulov returned after missing 15 games and scored in the third round of the shootout to lift the Dallas Stars over the Columbus Blue Jackets 2-1 on Sunday night.

The victory, which snapped a two-game skid, came a day after Dallas lost to Columbus in the closing seconds of overtime.

Radulov had been sidelined with a lower-body injury.

“It shows Rad’s value (and) how much we missed him on shootouts,” Stars coach Rick Bowness said.

Jake Oettinger made 29 saves and improved to 3-0-1 against the Blue Jackets this season.

“We know we’ve had some bad breaks in overtime this year,” he said. “It’s just the way it goes, but to get the one tonight is huge, feels great, and just a great road win.”

Joe Pavelski scored Dallas’ lone goal in regulation at 14:28 of the first period, his fourth against Columbus this season, assisted by Rhett Gardner with his first NHL point.

Dallas improved to 2-4 in its last six road contests and has eight points out of its last six games. The Stars are 7-1-1 when leading after the first period.

Zach Werenski scored Columbus’ only goal at 6:49 of the third to extend his point streak to four games. Jack Roslovic extended his assist streak to three games on the goal, notching his team-leading 14th of the season.

“We ended up with four or five scoring chances,” Columbus coach John Tortorella said. “I liked how we progressed during the game. They scored one in the shootout and we don’t.”

Joonas Korpisalo had 33 saves in his third straight defeat for Columbus, which has lost four of its last five games and seven of its last 10.

“I thought that was a great move,” Korpisalo said of the shootout goal. “He got me stuck there. I took the bait. I thought he was going for the low blocker, then he scored over my pad. Give him credit.”

Radulov played his first game since a lower-body injury suffered Feb. 4 against Columbus. He had three goals and eight assists in his first eight games as Dallas went 5-2-1. During his absence, the Stars fell to 3-7-5.

HOME AWAY FROM HOME

Pavelski has eight points against the Blue Jackets this season and nine points in five of his last six against them. He registered points in three of his last four games at Nationwide Arena and has 12 points over his last 10 trips to Columbus.

The Blue Jackets have played in 17 one-goal contests this season and are 8-3-6.

Want Your Country Back? #FlyYourFlag

One day last week I made a startling discovery as I was walking through my neighborhood in Kalispell, Mont. For