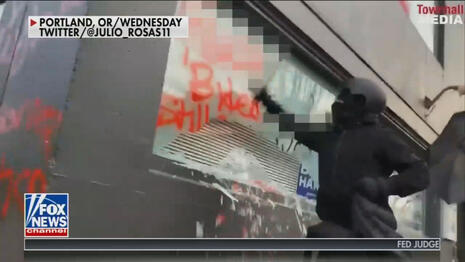 It’s not over. Portland remains a city under siege. Its citizens desperately beg for help from their local leaders and yell at ANTIFA/BLM protestors to “go home,” as they hopelessly watch black-clad activists engage in acts of violence on a weekly basis in their hometown. But the ABC, CBS, NBC evening news anchors, reporters and producers are suppressing this story. As they’ve devoted zero seconds to the ongoing acts of anarchy in Portland this year.

Portland erupted in violence again this weekend (in addition to riots in Los Angeles and Seattle) but there was no mention of it on the evening network shows on Sunday.

On Thursday night, protestors attacked the federal courthouse and stormed two banks in Portland. Earlier this month, it was reported Biden’s Justice Department dismissed 31 out of 90 Portland protest cases.

But if you turned on any of the Big Three (ABC, CBS, NBC) evening news shows this year you wouldn’t find any scenes of businesses being destroyed or local officials being harassed. 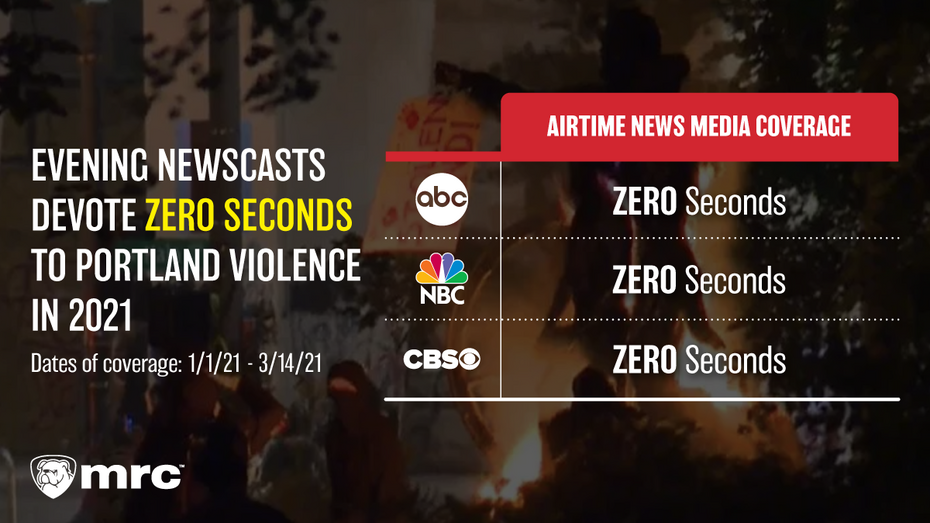 Fox News has been on top of the beat. Friday’s Fox and Friends covered the March 11 attacks.

The following are just a few more of the Portland protest developments being censored by ABC’s World News Tonight, the CBS Evening News and NBC Nightly News:

On March 2, NBC’s Portland Oregon affiliate KGW channel 8 in an online article headlined “Feds quietly dismiss dozens of Portland protest cases, KGW found 31 of 90 protest cases have been dismissed by the U.S. Department of Justice, despite warnings there would be ‘consequences for acts of violence,’” reported the following:

Federal prosecutors have dismissed more than one-third of cases stemming from last summer’s violent protests in downtown Portland, when protesters clashed with federal agents. KGW reviewed federal court records and found 31 of the 90 protest cases have been dismissed by the U.S. Department of Justice, including a mix of misdemeanor and felony charges.

Some of the most serious charges dropped include four defendants charged with assaulting a federal officer, which is a felony. More than half of the dropped charges were “dismissed with prejudice,” which several former federal prosecutors described as extremely rare. “Dismissed with prejudice” means the case can’t be brought back to court.

The dismissal of protest cases runs counter to the tough talk coming from the U.S. Department of Justice last summer. Billy Williams, then-U.S. Attorney for Oregon, vowed there would be consequences for the nightly graffiti, fires and vandalism outside the Mark O. Hatfield United States Courthouse.

Two-Hour Long Rampage In the City of Roses

Protesters smashed up several businesses during the latest night of destruction in Portland, Oregon — with fed-up locals screaming at them to “go home,” according to reports. Around 150 black-clad protesters marched through the troubled City of Roses late Saturday, trashing businesses during “direct action” against Immigration and Customs Enforcement, The Oregonian said. “Windows were broken at a grocery store, restaurant, bank, shipping business, and multiple coffee shops,” Portland police said of the two-hour rampage. Targets included a Chipotle, Starbucks and even an Urban Pantry, KOIN News said, with social media images showing anti-ICE graffiti also scrawled across numerous buildings, including the ICE building.

Portland, Oregon, Mayor Ted Wheeler said Monday the ongoing criminal destruction and violence occurring in his city, which has been the epicenter of protests against racial injustice for eight months, is “unacceptable.” At a news conference Monday, Wheeler also said he had filed a police report about an “incident” that happened to him, but he did not elaborate. Later, his office said in a statement that the mayor filed a police report over something that happened Sunday evening. “The mayor is cooperating with the police investigation and encourages others involved to do the same,” the statement said. Wheeler, who was reelected in November, has been targeted before by left-wing demonstrators, including some who smashed windows and set fires inside his condo building. Earlier this month, Wheeler was accosted by a group while he was dining at a restaurant outside in Northwest Portland. A member of the group started swatting at Wheeler as others yelled obscenities at him.
…
On Wednesday following the inauguration of President Joe Biden, more than 150 people gathered outside the U.S. Immigrations and Customs Enforcement building in Portland’s South Waterfront. Portland police said protestors were throwing rocks and eggs and vandalizing the building. Six people were arrested and officers declared an unlawful assembly.