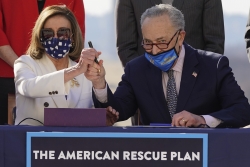 Democrats took a bold step in their $1.9 trillion pandemic relief law, tucking in a child tax credit that was expanded in size and scope. Nearly every family in America gets money for every one of their dependent children under 18. The credit can be taken in the form of monthly payments. If you don’t earn enough to pay federal income tax, you still get the money. And there are no conditions on how the money is spent. The program transforms how our federal government supports families and combats poverty.

There’s just one catch: The new law only enacts this program for 2021. Monthly payments will be sent out starting in July, with the remaining credit taken on one’s tax return. Without new legislation, the payments stop after December.

The bill’s drafters, along with President Biden, have every intention of making the program permanent. How easy will that be? Should the Democrats count on the political winds continuing to blow in a favorable direction?

The calculated risk they are taking is a reasonable one: Once most parents get accustomed to receiving monthly checks, politicians will be extremely reluctant to cut them off. Households with 83 million children are expected to benefit from the program; that’s a lot of parents to stiff. As House Ways & Means Committee Chairman Richard Neal said about the credit’s long-term prospects, “Getting something out of the code is oftentimes harder than getting something into the code.”

One Democratic operative argued that any Republican who dares voting against an extension, permanent or otherwise, will face a searing attack ad along the following lines: “When it was a vote on tax cuts for billionaires, Republicans voted yes, and when it was a check for you, they voted no.” If public support for the program is overwhelming, either enough Republicans will get on board to enact an extension through regular order, or the Senate’s 50 Democratic caucus members can pass an extension on their own through another party-line budget reconciliation bill.

But Democrats can’t guarantee the political pieces will fall into place so neatly. They don’t start with 50 senators firmly in favor of an extension without offsetting the annual $100 billion cost, at least in part. Sen. Angus King told CNN, when asked if he would support an extension, “The question is: How it would be offset? How would it be paid for? … I think we ought to start paying for things.” And other relatively moderate Democrats have indicated they have reached their limit for deficit spending and are ready to start insisting on tax increases or spending cuts to cover any additional spending proposals. Any disagreement over cost offsets could complicate passage of an extension.

Keep in mind: King is not a Democrat, but an independent who caucuses with the Democrats. And he represents Maine, the state that split between Joe Biden and Republican Sen. Susan Collins. Democrats may be inclined to stick together, and set aside any fiscal concerns, in order to cement a policy legacy for Biden and position themselves for the 2022 midterm elections. But King is not a Democrat, and not subject to such partisan pressure. He also is not up for reelection until 2024, when he will be 80 years ago, so he may not run again.

The state of the future economy is also an unknown. Granted, a post-vaccination boom is a good bet, just like the 1918-1919 flu pandemic was followed by the Roaring ’20s. But what if Democrats overshot with this relief bill, flooding the economy with too much cash, prompting a buying spree, sparking price inflation and thereby devaluing the new checks?

Democrats have good reason to ignore such worries. The pandemic is the economic devil we know. Both the Federal Reserve chief and several economic analysts of major investment banks say inflation is not an immediate concern. But good bets don’t always pay off. If inflation is spiking by the end of the year, Republicans will crow and deficit scolds will hold a strong hand.

Democrats are vulnerable to derailment by the unexpected because they enacted this massive program on a narrow party-line vote. An expanded child tax credit with monthly advance payments theoretically could have been a bipartisan policy. Sen. Mitt Romney proposed his own version, with bigger checks but with cuts to other anti-poverty programs. Nevertheless, Democrats concluded that ironing out those differences would have eaten up time, and may not have led to a bill that attracted enough Republicans to overcome a filibuster anyway.

Moreover, initial bipartisanship is no guarantee for future bipartisanship, as George W. Bush learned. In his first year, he quickly sent money to many Americans with a tax cut bill passed through the reconciliation process. The measure won the support of 12 Democrats, some of whom were needed for passage in what was also a 50-50 Senate because two Republicans had defected. But the tax cuts expired in 10 years. Bush spent the rest of his presidency pressuring Congress to make them permanent, but the deficit-minded moderates resisted. Eventually, portions of the tax cuts that benefited the wealthy were allowed to expire in Barack Obama’s presidency.

If today’s Democrats can keep their 50 votes for a child tax credit extension, it will all work out for them, and for America’s families. But Biden may learn what Bush did: Just because fiscal conservatives agree to help you send people money in your first year doesn’t mean they will keep doing it.