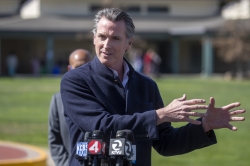 CARLSBAD, Calif. — Thousands of California parents who want to see their students return to school have experienced an emotional roller coaster this week, with many saying it’s hard to put any trust in the government’s conflicting narrative and decisions on school reopenings.

In early March, Gov. Gavin Newsom announced a $6.6 billion incentive plan, declaring that it was time for kids to safely return to the classroom. But just six days into the push, one of his health department appointees denied the applications of three San Diego-area school districts to expand in-person learning, overturning a decision by the top county public health official who had approved the districts’ opening plans two weeks ago.

The decision dashed the hopes of parents and local school officials pressing to increase the number of students allowed in the classroom. Prior to the ruling, the districts were so confident about their prospects for expanding in-classroom learning that they planned to send children to school starting this past Monday one-day a week with hopes of quickly increasing the number of days in the month ahead. (The plans also allowed for students to learn at home virtually if parents prefer and some teachers with COVID concerns and co-morbidities to continue teaching remotely.)

Dr. Naomi Bardach, a pediatrician and head of the state’s Safe Schools for All Team, refused to approve the expanded opening plans or give the districts the opportunity to appeal to comply with the new testing requirements outlined in her denial. Bardach cited two reasons for decision: She asserted that the districts don’t have asymptomatic testing protocols in place; and she said the percentage of students on secondary campuses on Jan. 14 was too low, so there isn’t a solid enough track record to reopen. When the districts asked if they could add the testing protocols, Bardach told them her decision was final.

Ginny Merrifield, the executive director of the Parent Association of North County, which has pushed for reopening, called the decision “shocking” and “unconscionable,” arguing that it amounted to a “Catch-22” that they couldn’t open because there weren’t 25% of students in the classrooms before the state shut down area schools during a spike in COVID cases last fall. Some officials at districts that were denied estimated they had roughly 20% of their students on campus back then and never knew that there would be a 25% threshold to expand. At least some of the districts seeking the waivers had tried to return to in-classroom learning more broadly in early January but paused their plans when teacher unions threatened litigation.

Michael Allman, a trustee of the San Dieguito Union High School District, told RealClearPolitics that this double bind is “what drove the superintendents the most crazy.”

Bardach has stood firm amid a fierce backlash about it on social media.

“California is committed to the safe reopening of schools, as reflected in new reopening dates announced every day,” a spokesman for the California Public Health Department said in an emailed explanation to RCP. “But the shortest path isn’t always the fastest one – we must ensure that the proper safety measures are in place so that schools can both reopen and stay open.”

The spokesman said the applications in question were “approved with conditions” – allowing for schools to bring back groups of 15 students at a time to “meet the mental health and academic needs of students most impacted by the pandemic.” By allowing only small groups of students on campus, the districts will be “better prepared for a successful reopening” once the county reaches the red tier, an improved standing from its current purple tier COVID status.

The California government uses the tiers to determine how businesses and schools can operate, and Newsom, who will likely face a recall special election in the fall, announced Thursday that increased vaccinations in several counties, including San Diego, would set them on a course for reaching the red tier Wednesday. (With the final petition deadline looming next Wednesday, recall organizers have hit nearly 2 million signatures, roughly 500,000 more than needed to trigger a special election, which will more than allow for an expected 20% that election officials could throw out as unverifiable.)

Allman and other critics say that Bardach’s approval with conditions actually amounted to a full denial because they were already bringing back the groups of 15 students at time and were looking to expand in-classroom attendance. He noted that the local county health officials had visited his district’s campuses and signed off on their plans to expand in-classroom learning. He also pointed out that the adjacent school district in the city of Vista is operating at the same level they aimed for because they moved more aggressively to expand in-classroom learning last fall while his and other districts proceeded slightly more cautiously in part because of the union resistance.

“We’re in identical situations now, but the state is saying Vista can expand, but we can’t. That’s discriminatory,” he added. “It has nothing to do with public health.”

Allman and other school reopening advocates cite a flood of new data at the national, state and district levels – finding that all students experiencing school by Zoom or other remote methods are falling behind in their studies, with students of color and high-poverty communities suffering bigger setbacks.

The social media pushback against Bardach has included an allegation that the health official has a conflict of interest because her husband, Jonathan Katzman, serves as the chief product officer at the Minerva Project, a company that offers virtual learning services and has touted itself as uniquely suited to help academic institutions that have been closed during the pandemic. A Minerva spokesman said the company’s online services don’t pose a conflict of interest for Bardach’s family because the company has no contracts at any level of the California government and has only begun to offer a revamped high school curriculum this past fall with two pilots schools — neither of which is located in California.

“We do not enable any high school to use our services mid-year. We only work with high schools on contracts that last 10 years (well past any impact of the pandemic) and we have no offerings for middle schools of any kind,” company spokesman Ben Nelson told RCP. “Much of our current work is in higher education and professional learning.”

Kate Folmar, spokesman for the California Health and Human Services Agency, also defended Bardach against the criticism, arguing that “it is both false and offensive to suggest that Dr. Bardach is motivated by anything other than a desire to safely reopen schools.”

“In addition, Dr. Bardach is one member of a cross-agency team that reviews school reopening plans,” Folmar added. “She is not the sole decision maker.” This response failed to satisfy some parents who argued that high school students will have a hard time making up the lost classroom time this year and some of the parents of these students could look to Minerva’s programs to try to make up the education gap over the summer.

“There should be no appearance of impropriety for an appointed official who now has control over millions of students,” one San Diego-area parent tweeted. “Thousands of doctors to choose from, and @GavinNewsom could not find ONE without any ties to companies that might be affiliated with remote learning?”

Area parents are on edge after two recent suicides at separate North County San Diego high schools, tragic incidents they believe are the result of social isolation (schools have been mostly closed in the area for roughly a year). Fed up students have gathered on sidewalks at busy intersections waving signs demanding that schools open now and asking, “How many more suicides are enough?”

While directly linking teen suicides to school closings is impossible, recent studies have shown a sharp increase in mental health emergencies during the pandemic. In Clark County, Nevada’s largest county, 18 students took their lives by mid-December last year, pushing the local school district to ramp up plans to bring students back as quickly as possible even as the area continues to post high numbers of COVID cases and deaths.

San Diego officials have said they are planning to reopen with hybrid instructions for all grade levels the week of April 12 to allow for teachers to get vaccinated and for the country to hit the red tier. Newsom has set aside 10% of all vaccine doses for teachers across the state.

As the school districts await their expected red-tier status with its looser requirements for reopening, Allman is also looking to the judicial system for answers. He could have some soon. The Parents Association of North County previously sued Newsom and state health officials to overturn reopening restrictions on middle and high school students. A San Diego County Superior Court judge is expected to render a decision early next week.

Newsom’s office hasn’t responded to RCP’s questions regarding why he allowed Bardach, one of his appointees, to reject the school district applications, a move that appeared to undermine his school reopening push.

The speech coincided with news breaking that the Los Angeles Unified School District, the second largest public school system in the nation, had struck a deal with the teachers’ union to bring back in-class instruction. It was a breakthrough after weeks of impasse and a recent overwhelming union vote backing a refusal to return unless a number of their conditions were met, including providing enough vaccinations for teachers and other school staff.

Newsom’s likely recall challengers have seized on the mixed messages his administration is sending on school reopenings. On Thursday, former San Diego Mayor Kevin Faulconer, a Republican, said Newsom is ill-equipped to handle the multiple crises currently plaguing the state and is failing to “stand up to the teachers unions.”

Since officially launching his campaign for governor last month, Faulconer has been holding press events in front of schools, hitting Newsom over the reopening issue. “Kids in all grade levels, in all school districts, deserve to be back in school now,” Faulconer said. “The partial reopening plan announced by Gavin Newsom … isn’t even close to good enough for our kids and teachers.”

The Face of Evil [Updated]