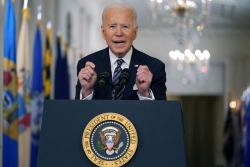 After slogging through what was one of the most bizarre and challenging years, Americans were looking to Uncle Joe to provide some solace, good cheer and a simple promise of hope that many remember fondly from his first stint in the White House as vice president.

President Biden’s first prime-time address, given on the anniversary of the coronavirus officially being declared a pandemic, offered a little of all three Thursday night — although no one speech is itself enough to really brighten the American mood, bring the nation together and provide that glowing light at the end of the tunnel he said would be his remarks’ overarching goal. But perhaps this was a start.

The address, delivered behind a lectern from the White House’s East Room, began with Biden’s biggest strength. He empathized with Americans about the toll the pandemic has taken on so many, especially all those who mourn the loss of 527,726 loved ones, “more deaths than in World War I, World War II, the Vietnam War and 9/11 combined.”

Biden then invoked a powerful line from Ernest Hemingway, crediting Americans for “being strong in all of the broken places,” one of the same lines he cited after the death of his son Beau in 2015.

“You lost your job, you closed your business, facing eviction, homelessness, hunger, a loss of control,” he said. “Maybe worst of all – a loss of hope.”

It was Biden’s first major speech since Inauguration Day, nearly two months ago, and it came as Americans are clamoring to see more of him. The press has pointed out that Biden is flouting the normal presidential tradition of having a full-blown solo press conference by this point in his tenure. He will take brief questions from reporters, but typically after his staff has called on them; he then ignores other shouted questions while his press handlers usher him away from the cameras, sometimes physically pushing reporters, including this one, to leave so the questions will stop.

The White House timed the speech to coincide with Biden’s 50th or 51st day in office, depending how you count it. It also came just hours after the new president signed the $1.9 trillion COVID relief package – the first major piece of his agenda to pass Congress.

Press Secretary Jen Psaki and other officials tried to strike an optimistic note ahead of the remarks, previewing that Biden would promise that all adult Americans would be eligible for the COVID vaccine by May 1. But the structured nature of a teleprompter-assisted speech rendered the effort more canned and cautious than cathartic. Besides that, the content was far from enough to unify a still-deeply divided nation, the goal Biden outlined at his inauguration.

During and after the address, the president’s supporters reveled in a return to civilized and sober discourse, compared to the freewheeling, in-your-face, often offensive (but always news-producing) comments of his predecessor. President Trump over-promised and under-delivered last year, notably trying to assure Americans early in the pandemic that restrictions could be lifted by the first upcoming holiday, Easter. That was overly optimistic, to say the least, and it dashed Americans’ hopes as the full magnitude of the still-developing pandemic began to set in during the spring of 2020.

It’s a mistake Biden has steadfastly avoided throughout his campaign and in the first weeks of his presidency. Better to under-promise and over-deliver has been the prevailing Biden theme, even if over-delivering means hitting a mark just slightly above the status quo, as he did when promising early on to provide 100 million vaccination shots by his 100th day in office.

Biden revised that goal upward Thursday night to say he would meet that number on his 60th day in office by providing 2 million shots per day, “outpacing the rest of the world.”

But as more Americans get the vaccine, patience for a return to normal life is waning, and Biden struggled to strike the right balance Thursday night between establishing hopeful but realistic goals and not stoking irrational exuberance about declining COVID cases and deaths. With some Republican-controlled states moving away from mask mandates and restrictions on businesses, Biden issued stern words – that voluntary mask-wearing remains the “easiest thing to do to save lives,” even though he acknowledged the simple act “sometimes divides us.”

He repeated his plea for people to listen to scientists such as Dr. Anthony Fauci, an admonition fraught with politics, while acknowledging the skepticism many Americans hold after experiencing shifting warnings from government and medical experts over the last year.

“We need to remember the government isn’t some foreign force in a distant capital,” Biden pleaded. “No, it’s us, all of us, we the people. For you and I, that America thrives when we give our hearts, we turn our hands to a common purpose.”

The speech was delivered fairly plainly except for moments when the president leaned in to make a harder sale, pleading with the American people to keep some skin in the game and help him help the country turn the corner. “I need Americans to do their part. That’s no hyperbole,” he implored. “I need you to get vaccinated when it’s your turn.”

Voices on both the president’s left and right questioned his vision about returning to normalcy – that by the Fourth of July, if Americans remain on good behavior, wear their masks and continue social distancing, they just might be able to celebrate the holiday with a few friends in the backyard for BBQ. If Americans don’t comply, there could be consequences, he warned: “If we don’t stay vigilant and the conditions change, we may have to reinstate restrictions to get back on track. We don’t want to do that again.”

“Who are you talking to? This is a free people, a free country,” Carlson erupted immediately after the speech ended. “How dare you tell us who we can spend the Fourth of July with.”

To a certain extent, the speech also lacked self-reflection. While Biden rattled off the costs for Americans during the pandemic — mass unemployment, widespread despair, mental health issues and those unable to visit dying loved ones or even hold a funeral to grieve their deaths – conservatives pointed out that these things didn’t happen in a vacuum. Democratic policies were largely responsible for prolonged lockdowns and school closures that have impacted so many so negatively.

USA Today’s longtime Washington bureau chief, Susan Page, was far more diplomatic. She dubbed the speech “a fireside chat without the fire,” a reference to Franklin D. Roosevelt’s folksy radio addresses to the nation at another trying time in American history. Although it was a comparison that can be taken two ways, for the president’s team, that was good enough.

Andrew Bates, a Biden campaign and transition spokesman, proudly retweeted Page’s remark with three blue arrows pointing down to it, an apt acknowledgement of Biden’s embrace of the boring and the routine while the “chaos commander-in-chief” continues resisting attempts to confine him to the political background.

Still, it’s a far cry from the hope and change President Obama promised on the campaign trail and in the early days of his administration as his team feverishly worked across the aisle with Republicans to stop the nation’s economic free-fall. The Biden administration has nailed the change part of the equation with his slew of executive orders and the massive stimulus package. Democrats have deemed the rescue package the greatest expansion of the welfare state since LBJ while powerless congressional Republicans seethe.

The hope side, however, could use some work. If COVID deaths and cases continue to recede in the weeks ahead, Americans may feel they need a different shot in the arm from their president – one lighter on lectures and heavier on embracing, even celebrating, a true return to normal daily life.

How We Got Here; Biden and Schools; GW’s B-Day

SHOCK! Debra Messing Says Something Sane: ‘Hamas Must Be Defeated’

An Open Letter to Critics of Michele Tafoya