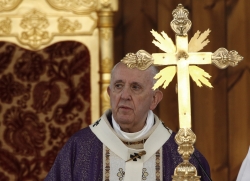 Despite marauding ISIS fighters and a raging pandemic, Pope Francis made a historic pilgrimage this weekend to Iraq, the birthplace of Abraham, who was the first prophet to embrace belief in a single God, and the patriarch of the world’s three great monotheistic religions—Judaism, Christianity, and Islam. Vatican News called it the “most difficult and most important journey” of Francis’s eight-year pontificate. It was taxing physically, too. The eighty-four-year-old Pope, hobbled by sciatica, limped badly as Iraqis sang in Aramaic, the language of Christ, and (unmasked) dancers from Iraq’s diverse tribes, religions, and ethnic groups performed along a red carpet. “I am the pastor of people who are suffering,” the Pope told Catholic News Service last month, when asked why he insisted on making the trip. En route to Iraq, Francis told reporters, “This is an emblematic trip, a duty to this land so martyred for so many years.” ISIS once boasted that it would invade Rome and defeat Christianity. Instead, the Bishop of Rome went to the heart of what had been the Islamic State caliphate.

END_OF_DOCUMENT_TOKEN_TO_BE_REPLACED

Alarming Complacency Over the Return of Inflation

Kyle Rittenhouse Had No Business Being in Kenosha