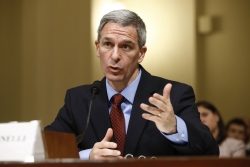 Last week, Susan B. Anthony List and American Principles Project announced a $5 million “Election Integrity Campaign” led by former Department of Homeland Security official Ken Cuccinelli. Their stated aim is to “restore confidence in election outcomes for social conservatives” by opposing H.R. 1 and “going on offense” at the state level around election reforms. Days later, former President Trump’s speech at CPAC in Orlando picked up on many of the same themes, and those polled at the political conference listed “election integrity” as their top issue.

With confidence in our democratic institutions at a dangerously low point, the first step toward restoring confidence in our elections is to tell people the truth. With Christian-led “Jericho Marches” calling for overturning the 2020 election, prominent pro-life Christian leaders speaking at the “Stop the Steal’ rally, and a Jesus Saves sign and Christian crosses and iconography held high by individuals storming the U.S. Capitol on Jan. 6, Christian leaders have a particular responsibility to tell the truth about the 2020 election: President Joe Biden won a free and fair election.

In Cuccinelli’s interview with RealClearPolitics, he chose instead to give a wink and a nod to the Big Lie, the false claim that Trump actually won the election:

“[Conservative leaders] are clearly getting feedback from their members and their universe that is questioning, ‘Why should we put this much effort into a system that cheats us?’” he said, adding, “I’m not saying it does or it doesn’t, but that is the perception of many of them.”

Cuccinelli is engaging in the same destructive wordplay that many GOP leaders have deployed since the 2020 election: pushing the Big Lie in a way that appeases the most dangerous elements of the conservative coalition while giving himself enough wiggle room to backtrack when challenged — or when such language leads to violence. The quickest and most effective way to “restore confidence in our elections” is for conservative leaders like Cuccinelli to abandon this rhetorical trick and tell the plain truth about the 2020 election.

Conservatives have raised some legitimate issues that merit consideration for future elections, for example, pushing for clearer standards around the limits of what secretaries of state can do during a crisis to make voting accessible. But these conversations are impossible as long as Republican leaders continue to use them to undermine the results of the 2020 election. They must be rooted in the truth, starting with the findings from Cuccinelli’s own DHS in the Trump administration: The 2020 election was the most secure election in American history. Not only was it the most secure, but it was also the most transparent, most observed, and most audited election ever, with multiple states conducting recounts and forensic audits that confirmed the results and found no widespread issues. More than 60 judges — including judges appointed by the former president — confirmed the same. On Jan. 4, over 2,000 religious leaders, including Barbara Williams-Skinner and World Vision founder Richard Stearns called on Congress to affirm the clear will of the voters, noting their acceptance of the results.

Any effort to increase confidence in our elections must start from a place of reassuring the American people of these indisputable facts.

Taking Cuccinelli’s campaign at its word that this effort is about voter integrity and election transparency, no productive outcome can come from feeding the Big Lie and rooting the effort in debunked conspiracy theories. Undermining confidence in the 2020 election and aligning against robust voting access is a disastrous position for social conservatives if they want to be viable in the future, particularly at a time when they are attempting to build a racially diverse, socially conservative, working-class Republican Party.

The campaign’s initial statements indicate that they will oppose measures such as early voting and efforts to make voter registration easier. No political movement in the U.S. should rely upon restricting voting access to achieve its goals. Such a movement has no durable future in electoral politics. Our democratic republic can be frustrating, especially when many of our fellow Americans don’t agree with us on issues as fundamental as the right to life. But the response to losing elections should be to regroup, win the argument, and win at the ballot box.

All of the freedoms we cherish, including our religious freedom, depend on a functioning democracy and free and fair elections. As some individuals say our democracy is so flawed as to be unworkable, the conservative response should be to defend our institutions, not undermine them; to tell the hard truths to preserve them, not easy obfuscations that appease a political base and the former president.

Trust in our democratic institutions has eroded to the point that nearly three in 10 Americans support political violence. Actual deadly violence broke out in the U.S. Capitol as a direct result of conspiracy theories about the 2020 election. To restore trust and make our country safer, we must unequivocally reject the faulty premise of widespread voter fraud rather than accommodate it. Then, we can work across party lines to enact broadly popular reforms that ensure voting access, further secure our election infrastructure, and increase confidence in our elections.

A Skeptic's Case Against Boosting Everyone

Send Kids Back This Fall, No Matter What