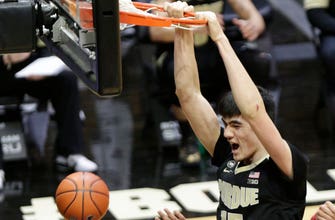 WEST LAFAYETTE, Ind. (AP) — Zach Edey scored 20 points and Jaden Ivey added 17 as No. 23 Purdue beat Indiana 67-58 Saturday for its ninth straight win in the in-state rivalry, the Boilermakers’ best run in the series since John Wooden played for them.

The Boilermakers beat Indiana nine in a row from 1929-35 boosted by Wooden, a star player who went on to coaching fame. Purdue beat the Hoosiers a school-record 12 straight from 1908-14.

Aljami Durham had 14 points and Trayce Jackson-Davis finished with 12 points and five rebounds to lead the Hoosiers. Indiana (12-14, 7-12) finished conference play for the fifth consecutive season without a winning record — the first time that has happened since 1911-19.

This one looked awfully familiar, too, as the Hoosiers went 5 of 23 on 3-pointers and had several long scoreless stretches.

Indiana managed to quickly cut a 29-20 deficit to 35-31 early in the second half before the Boilermakers answered with eight straight points. When the Hoosiers charged back, getting within 47-42 with 6:29 to go, Purdue countered with an 8-3 burst to make it 45-35.

Indiana was still within six with less than a minute to go, but the Boilermakers closed it out at the free-throw line.

Indiana: Just a couple of weeks ago, the bracketologists had the Hoosiers pegged for the NCAA Tournament. Their late-season swoon certainly put those hopes in jeopardy, and now they may need to win their first Big Ten Tournament title to make it.

Purdue: The Boilermakers head into next week’s league tourney as perhaps the league’s hottest team and a real threat to win the title in Indianapolis. Not only are they playing well, they are 14-1 in Indiana — and won’t leave the state again this season.

While only a few dozen were inside Mackey Arena and its cardboard cutouts, hundreds enjoyed the rivalry from across the street at Ross-Ade Stadium. They took advantage of the unseasonably warm, sunny day by sitting on blankets inside and watching the game on the football stadium’s video board.

Indiana: Must wait for the Big Ten Tournament bracket to learn next week’s opponent at Lucas Oil Stadium.

Purdue: Won’t play until Friday against a yet-to-be determined foe.