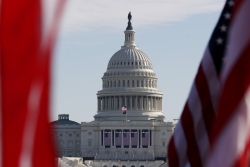 It’s clear that the GOP is in disarray. The recent CPAC gathering only served to highlight that Republicans are groping for a winning strategy. The elephant in the room refuses to go away. Donald Trump remains a polarizing figure whose brash and crass demeanor retains a strange magnetism, even as his self-absorbed pettiness undermined what were often sensible policy instincts. Demographically, Republicans cater to an aging population. Progressives seem to have the momentum and the youth. They certainly control the key institutions and seem poised to make good on their promise to fundamentally change America. If conservatives want to be anything more than a speed bump on the way to a dreamy progressive future, they must creatively reimagine conservative principles for our rapidly changing circumstances: 2021 is not 1980.

A question rarely asked: Why do self-identified conservatives seem so uninterested in conserving? To ask the question is to probe the heart of the problem.

To be sure, some conservatives might claim that they are interested in conserving traditional values or American hegemony or perhaps some abstract notion of freedom. But even when these things are named, the language and the disposition are less about conserving and more about fighting. Saying, “We’re going to fight for family values” is not the same thing as doing the hard work to cultivate the practices and institutions necessary for thriving families.

In short, the language of conserving — of stewardship — is foreign to many conservatives. Thus, we have a significant group of people who call themselves conservative but who have lost the inclination (as well as the practice) of conserving. Recovering this disposition is a key component to revitalizing American conservatism. Here are some specific suggestions.

2. Stewardship must extend beyond the natural world to include the preservation of culture, communities, and institutions. We have inherited many good things from prior generations who sacrificed much on our behalf. Part of stewarding an inheritance is to pass it on intact — and perhaps even improved — to the next generation. Stewardship, then, requires attentiveness to the past while conscientiously preparing for the future. Stewards think in terms of generations yet unborn, even as they care for things handed down from people long dead. What we have received is not perfect, but we can love it, care for it, and improve it nonetheless. To despise one’s inheritance – as is the current fashion – is a profound act of hubris and ingratitude. One does not improve by destroying. The nihilism of repudiation will lead inevitably to destruction. Stewardship must begin with love born of gratitude.

3. Effective stewardship of a place or an institution requires that we learn to speak in terms of proper scale, for individual actions and public policies are effective only to the extent that we can comprehend problems in concrete terms. The superficial penchant to rail against “big government” is increasingly unpersuasive. Republicans, when in power, have not reduced the size of government, and they have done their share to expand the debt. They have, furthermore, enthusiastically championed the consolidation and expansion of corporate interests. They, like their Democratic foes, have become a party of Big Government and Big Business. A renewed conservatism will recognize that concentration of power in any form — political or economic — is dangerous. Conservatives must see how the two pathologies are connected and deal with both simultaneously. If not, both will continue to expand, and the lines separating them will become increasingly blurred.

4. Politically, conservatives must champion a recovery of federalism, which has been so badly damaged in recent decades. Socially and culturally, conservatives should explicitly reorient themselves toward stewarding local communities. Recent years have seen a renewed interest in local culture, local food, local democracy, and local economies, but these sensibilities have found far more traction on the left than on the right. In fact, many so-called conservatives denigrate these things as crunchy, hippie, lefty nonsense. This represents a serious failure to grasp how conservatism is necessarily tied to the local, to what Burke called “the little platoons.” A resurgence of localism presents conservatives with a tremendous opportunity.

5. Any credible and effective conservatism must make the expansion of middle-class property a priority. The growth of the welfare state is countered only by a critical mass of citizens who can do without government aid. Contrary to the purveyors of false dreams of a propertyless future, ownership is inseparable from genuine freedom. Despite accusations of racism, Trump’s economic policies clearly benefited blacks: black household income rose, and poverty rates reached historic lows. As a result, Trump won more black and Hispanic support in 2020 than he did in 2016. This suggests a concrete strategy: reduce barriers and create opportunities for the working poor to acquire real property and enter the middle class. This brings us back to stewardship – for those who own and care for property will be less inclined to “burn it down” and more likely to develop virtues such as self-control, deferred gratification, personal responsibility, thrift, and an appreciation for limits. These are indispensable conservative virtues.

If self-professed conservatives learn to speak and act in terms of stewardship, healthy local communities, and middle-class property, they will find a constituency that is young, vibrant, multiracial – and profoundly conservative.

Mark T. Mitchell is dean of academic affairs at Patrick Henry College and the author, most recently, of “Power and Purity: The Unholy Marriage that Spawned America’s Social Justice Warriors.”

Not Enough “Green” in Green Energy?