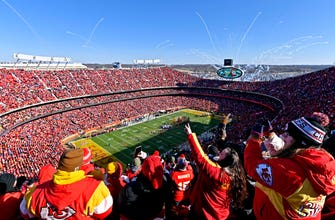 KANSAS CITY, Mo. — The home of the Kansas City Chiefs will have a new name when the upcoming season begins.

The team announced Thursday that it had reached a naming rights deal with Government Employees Health Association, based in Lee’s Summit, Missouri.

The stadium’s full name will be GEHA Field at Arrowhead Stadium.

Officials with GEHA and the Chiefs said in a news release they plan to ensure that Arrowhead Stadium will remain the identity of the stadium. Arrowhead has been the Chiefs’ home since 1972 and is one of the NFL’s most recognizable venues, and this is the first time the team has sold the stadium’s naming rights.

GEHA is the Chiefs’ exclusive partner for health, dental and vision plans.

“When we set out to find a partner for the field at Arrowhead, it was critical to identify a national leader that shares our core values, as well as a deep connection to the local community and respect for Chiefs Kingdom,” Chiefs president Mark Donovan said.

Skip Bayless: The 76ers have burned themselves; I don’t blame Ben Simmons for being done with them I UNDISPUTED