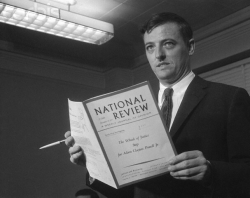 In the weeks since Donald Trump departed the White House — and during the four years he resided there – we were constantly told that conservatism is in crisis. Then again, crisis seems to be a recurring condition for conservatism, or, more precisely, for the American conservative movement. By and large, these crises have proved fertile. American conservatism’s resilience over the last seven decades — its ability to shift weight and adjust focus to achieve a suitable balance — suggests that what appears as calamitous disarray involves salutary adaptation, sometimes painful and awkward, to changing circumstances.

The post-World War II conservative movement was born in crisis. Communist totalitarianism abroad and rapid expansion of the welfare state at home provoked incisive responses from two camps: those determined to conserve individual freedom and limited government and those dedicated to conserving traditional morality. Both classical liberalism and traditionalism had populist appeal, espousing principles that political and intellectual elites rejected but which significant swaths of ordinary voters embraced.

In 1955, a sense of crisis surrounded William F. Buckley’s launch of National Review. The upstart magazine quickly established itself as American conservatism’s preeminent publication, serving as a home for classical liberals and traditionalists, who were often at loggerheads even as polite society ostracized both. The conservative movement’s first national standard-bearer, Barry Goldwater, suffered a landslide defeat in the 1964 presidential election to Lyndon Johnson. In the mid-1970s, the fallout from Watergate roiled conservatism as well as the nation. George H.W. Bush’s loss to Bill Clinton in the 1992 presidential election sent shock waves through the conservative movement as did Barack Obama’s defeat of John McCain in 2009 and Mitt Romney in 2012.

In “A New Conservatism: Freeing the Right From Free-Market Orthodoxy,” published this month in Foreign Affairs, Oren Cass addresses conservatism’s current crisis. He sensibly contends that, in light of Trump’s achievements and implosion, conservatism must rebalance its priorities. For good reason, Cass urges conservatives to develop better policies to deal with inequality, labor, and public education. However, his tendentious critique of those whom he disparages as promulgators of “market fundamentalism” — from whom he would strip the title conservative – echoes old errors that marked internecine conservative strife dating back to the 1950s. It also warps today’s political realities and subverts Cass’s aspiration to form a right-leaning governing coalition.

Cass is executive director of American Compass. Founded in 2020, the new organization’s mission is “[t]o restore an economic consensus that emphasizes the importance of family, community, and industry to the nation’s liberty and prosperity.” At the time, Jack Butler gently observed in National Review that “some of Cass’s immediate claims are worth questioning.” That remains true.

Consider his mockery of conservatives’ response to the COVID-19 global pandemic: “Republicans on Capitol Hill and in the White House flipped frantically through their dog-eared playbooks from the 1980s to determine just the right tax cut for the moment.” In the pandemic’s wake and consistent with their principles, many conservatives did propose tax cuts to stimulate the economy. Cass, however, falsely accuses Republicans of having “hewed rigidly to an agenda of tax and spending cuts, deregulation, and free trade.”

Actually, the GOP adopted a hybrid agenda. On March 27, 2020, in the pandemic’s early days, President Trump signed into law the Coronavirus Aid, Relief, and Economic Security Act, passed by a Republican-led Senate and a Democratic-led House. The CARES Act provided one-time cash payments to individuals, temporarily supplemented unemployment benefits, authorized loans to small businesses and large corporations, and delivered hundreds of billions of dollars to state and local governments. In May 2020, the Trump administration announced Operation Warp Speed, a public-private partnership that in record time supplied the American people and nations around the world with responsibly tested and highly efficacious vaccines.

Cass’s narrow definition of conservatism further distorts his analysis. “The hallmark of conservativism,” he begins reasonably enough, “is not, as is often thought, opposition to change or the desire for a return to some earlier time.” A related mistake, he observes, is “that conservatives lack substantive preferences.” But instead of identifying American conservatism’s substantive preferences — along with its principles and understanding of human nature and government — Cass highlights conservatism’s supposedly defining concern: “What in fact distinguishes conservatives is their attention to the role that institutions and norms play in people’s lives and in the process of governing.”

Progressives, too, care about the moral and political impact of institutions and norms. Having wrested control of the K-12 school system and universities, mainstream media, Hollywood, and the federal bureaucracy, they seek from those commanding heights to remake popular and political culture. Moreover, the left — in the academy, the media, and government — stresses the use of law and public policy to transform family, society, and the organs of government in accordance with progressive norms. Left and right differ over which norms should be cultivated, how institutions should be structured, and the extent of government’s involvement.

Cass’s abstract definition of conservatism as attentiveness to norms and institutions, moreover, reflects the excess of abstraction that conservatives since Edmund Burke — whom Cass cites as a model — have criticized. While appreciating that conservatives in the mold of Burke must combine “a disposition to preserve” with “an ability to improve,” Cass does not adequately specify the norms and institutions central to the American experiment in ordered liberty. In contrast, we can look to “Reflections on the Revolution in France,” published in 1790. In that document, the first of the modern conservatives came to the defense of the venerable beliefs, practices, and associations that sustained British liberty against the radical dogmas about freedom emanating from Paris.

While the American conservative movement possesses substantive preferences and is dedicated to the preservation of specific institutions, Cass fails to identify the core ones. Well understood, the conservative movement in America seeks in the first place to preserve the constitutional order, which is grounded in unalienable rights, embodies the principles of limited government, and depends on a citizenry that is educated — at home, in the community, and at schools — for the rights and responsibilities of freedom. Cass rightly seeks policies that fortify families, sustain communities, and address the discontents of working-class Americans, who have been hit hard by globalization. But he tends to downplay or neglect the imperatives of individual freedom and limited government in the fashioning of such policies.

American conservatism must once again respond to crisis by striking a balance, appropriate to the circumstances and the demands of the moment, that gives both classically liberal convictions and the traditional morality that sustains freedom their due. We need not “a new conservatism” but rather a new blend of American conservatism’s enduring principles.

Reinforcements: Doocy Gets Help From Lefty Reporters Versus Psaki on COVID, Immigration