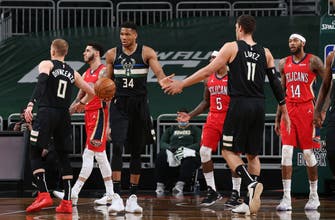 It was the fourth straight win for the Bucks, who finished their first half of the season in third place in the Eastern Conference.

Zion Williamson scored 34 points and Brandon Ingram added 23 for the Pelicans, who had won two straight.

But Thursday’s game was tight. There were 15 ties and 23 lead changes.

New Orleans took a 125-124 lead with 2:01 to play in the fourth quarter on a layup by Williamson. But after Antetokounmpo hit a jumper and then took a rebound the length of the court for a dunk, Milwaukee led 128-125 when New Orleans called timeout with 1:10 left.

It was the third matchup between the two superstars, with Antetokounmpo outscoring and outrebounding Williamson in both previous matchups.

The teams entered Thursday among the top five in the league in field-goal percentage — with the Bucks ranked second at 48.8%; the Pelicans fifth at 48.3%. But they shot even better than their season averages, with Milwaukee shooting 54.2% and New Orleans 50% from the floor.

The Bucks have generally dominated their opponents in rebounding, entering with a league-leading average of 48.5 per game. But they were outrebounded by the Pelicans 47-42. New Orleans’ Steven Adams had 13 rebounds.

The Bucks prevailed without guard Jrue Holiday for the 10th consecutive game (health/safety protocol). Holiday, who was acquired from New Orleans in a four-team trade in November that sent Bledsoe to New Orleans, is averaging 16.4 points and a league-leading 1.9 steals per game.

Pelicans: “I haven’t noticed it, I’ve got to be honest, I just haven’t,” coach Stan Van Gundy said about fans being back in NBA arenas. “I don’t know that I ever do, unless you’re in a place that’s absolutely packed and going crazy.”… In the first Pelicans-Bucks meeting of the season, Ingram, Lonzo Ball, Bledsoe and Williamson each finished with 20-plus points, while Adams added 20 rebounds, becoming the first starting lineup to have four players score 20-plus and the fifth starter grab 20-plus rebounds since the Detroit Pistons in January 1992.

Skip Bayless on Russ Westbrook’s point guard ranking: I buy it; I’d take Ben Simmons as my distributor over him I UNDISPUTED